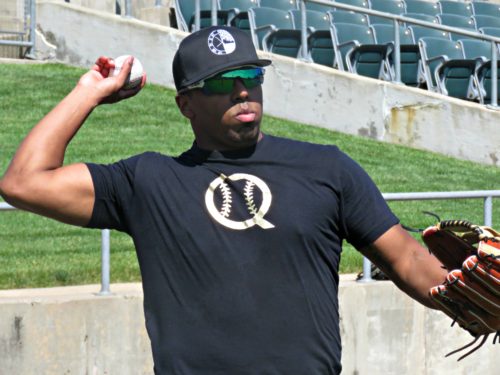 Joe Quinones is the Definition of a Baseball Journeyman

“I’m always shooting for the stars… I think that my hard work is starting to really pay off and it’s getting noticed. I want to play at the highest level and I’ll keep going until they tell me to stop.”

With play cancelled in the majority of professional baseball leagues, only a few hundred players will get to play professionally in 2020. The Somerset Professional Baseball Series (SPBS) between the NJ Blasters and Somerset Patriots is one of the few that still stand, and it is giving local ballplayers such as Joe Quinones the opportunity of a lifetime.

Somerset Patriots utility man Joe Quinones is a survivor. He has torn his UCL, been told “no” by various Major League Baseball teams and has spent the past few seasons playing in the Pecos League, the lowest level of professional baseball. Still, the 30-year-old Freehold native continues grinding everyday to live out his major league dreams.

You may not expect the Somerset Professional Baseball Series in Bridgewater, NJ to feel like the major leagues, but it may as well by the way Quinones’ eyes lit up when he surveyed the stadium.

“It doesn’t get much better than this,” he told me with a grin. “You can get plucked out of here and go straight to an MLB roster or their Triple-A program (and) the organization here from top to bottom has been terrific.”

The Somerset Patriots roster consists of many talented players who have spent time with affiliated ball or in the major leagues. Quinones wants to learn from those players, and hopes this season can further his end goal of landing on a big league roster. He is making the most of his time, staying late after practice, and arriving early to put work in. 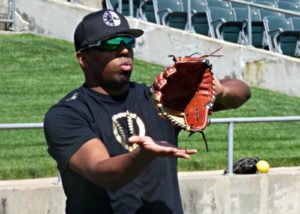 “I’m always shooting for the stars,” he said. “I think that my hard work is starting to really pay off and it’s getting noticed. I want to play at the highest level and I’ll keep going until they tell me to stop.”

The switch-hitting Quinones hit .375 in his senior season at Mercer County College in 2011, but the call on draft day never came. He was left with the particularly challenging task of finding somewhere to play professionally.

Quinones worked out with the Nationals, DiamondBacks, and Mets, but his effort was brought to a halt when he partially tore his UCL, which is a tear in the collateral ligament of the elbow. The surgery to repair the tear (Tommy John Surgery) cost quite the hefty fee, and has a minimum recovery time of a year and half. Many athletes in Quinones’s situation would never have thrown a baseball again, but he kept pushing, opted to avoid surgery, and  recovered over a couple years with rehab as well as PRP shots. “(The rehab) was tough,” he explained. “It was a long journey…whether you get surgery or not it’s a trip (but) i’m not gonna quit”

After returning from injury, he continued his career in the Pecos League, spending three years playing with the Train Robbers, Boom, and Saguaros.

The Pecos League is the hardest professional league to play in. Players typically make $50 a week, often play at unmanicured public fields with high school umpires, and the travel is… not great.

“You’re definitely doing it for the love of the game,” Quinones told me. “It isn’t great but you’ll take it… and the fact that I went out there and did what I was supposed to be doing gives me the opportunity to be here with the Patriots, which is great, it was the goal.”

Quinones also grinds off the field, working for investor Daymond John’s “Shark Group” on client outreach, social media, and marketing. He has also worked on several projects including the “Baseball and Chill” podcast with MLB Network’s Scott Braun and Kelly Nash.

With an electric, funny, optimistic, and competitive personality, even though each at bat may not end the way he hoped, Quinones continues to strive for success. “I think failure is so important,” he explained. “The fact that I’m constantly failing lets me know I’m striving for something that’s not easy, and I like that.”

“I want people to see my story and my grind and see a part of themselves in that and go after their dreams.”

The game has taken its toll on Joe Quinones, but he continues to chase his dreams in a true “never give up” fashion.

“I feel like you’ve really got to be dedicated,” Quinones explained. “I’m definitely cutting into my sleep and burning the candle on both ends but why not while I’m still young?”