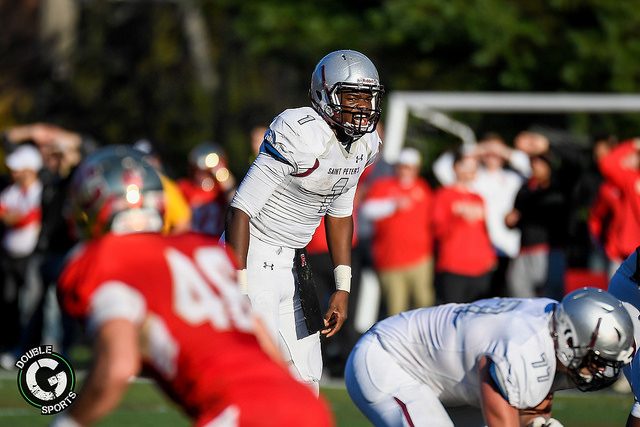 St. Peter’s Prep senior quarterback Johnathan Lewis overcame an injured ankle and showcased his abilities, completing 11 of 16 passes for 123 yards and two touchdowns while carrying the ball 16 times for 104 yards on the ground and one score, leading St. Peter’s Prep (8-3) to a 28-7 victory over Bergen Catholic (7-4) in the Non-Public Group 4 semifinal game at Bergen Catholic High School in Oradell on Saturday.

The Marauders will face-off against Paramus Catholic in the state final in two weeks at Met Life Stadium. Two years ago St. Peter’s defeated the Paladins 34-18. Paramus Catholic defeated Don Bosco Prep in their semi-final.

“Our defense played awesome today and I thought the way we could play on a regular basis,” St. Peter’s Prep Head Coach Rich Hansen said. “To beat a team twice in our own division and Bergen has so many good players by design. A challenge but our kids were unbelievable and we had the bets week of practice in a while and doing right things. Jonathan’s right ankle was a little tender today and did a couple of things to protect him today. He is the motor that makes us go and a big part of what we do.”

Last week against St. Augustine Prep, Bergen Catholic tallied 57 points with 50 coming in the first half and Johnny Langan accounting for five touchdowns. However, the script would be flipped on Saturday.

In the first quarter, the Marauders defense forced a turnover on a deflected pass from Langan intended for wide receiver Andrew Vito. Free safety Cameron Clarke knocked the ball out of Vito’s hands, leading to middle linebacker Jacob Miras recovering the ball at the St. Peter’s Prep 42-yard line.

The running duo of Lewis and Dakari Falconer prospered on the ground, picking up chunks of yardage moving the ball downfield to the Bergen Catholic 10. On 2nd down, Lewis rolled out of the pocket firing a laser pass to Shayne Simon in the left corner of the end zone with 6:14 left.

Bergen Catholic responded immediately on their ensuing possession with senior Nick Palmer returning the kickoff to the Crusaders 44-yard line. Keeping it on the ground, the combination of Langan, Josh McKenzie and Rahmir Johnson quickly moved the ball into St. Peter’s Prep territory. A 14-yard run by wide receiver Ankaury Camilo advanced the ball to the 12. On 2nd and 6 at the 9, McKenzie displayed terrific agility and balance swooping across the goal line tying it at 7-7 with 3:16 remaining.

The momentum would shift dramatically in the second quarter as the Marauders defense put the clamps on the Crusaders offense, making big plays to keep Bergen Catholic out of the end zone. Twice on 4th and 1, St. Peter’s Prep denied a first down.

Working with a short field inside Crusaders territory, Lewis gained 17 yards on a QB keeper. Aided by a holding penalty assessed against the defense the Marauders had the ball at the 20. Senior running back Damion Abrams did the rest taking the handoff, splitting the hole in the line and scampering into the end zone making it 14-7 with 4:32 to go in the first half.

“Our defense was spectacular and came up with so many short yardage stops whether it was 3rd or 4th down. They did a great job of putting pressure on Langan and hitting him a lot and that was the plan by making him feel uncomfortable and keep from him getting in rhythm.”

After a three-and-out by the Crusaders to start the second half, Lewis engineered an 11-play 88-yard drive that consumed 3:27 of the clock capped off snagging the snap one-handed and plowing ahead for the score from three yards out extending the margin to 21-7. In the fourth quarter, Bergen Catholic had one last opportunity to get back into the game driving the ball down to the Marauders 13-yard line but Simon stepped in front of a pass from Langan for the interception. Providing the final dagger, Lewis fired a 30-yard strike to Jorge Portorreak with 4:24 left.

“If I could give the game ball, I would give it to the defense,” said Johnathan Lewis. “They came out to play holding them to 7 points and our offensive line came to play. They were spying me the whole game and our running backs had some beautiful runs.”

Hansen on the impending rematch against Paramus Catholic, “They’re a good team and loaded with talent. They do a great job defensively and have all the marquee names and got our hands full obviously but we’re going to have to go back to the drawing board here and come up with a game plan. I have so much respect for their QB, a tough kid and engine that makes them go so it’s really going to be an interesting match-up of quarterbacks and pretty evenly matched teams.”