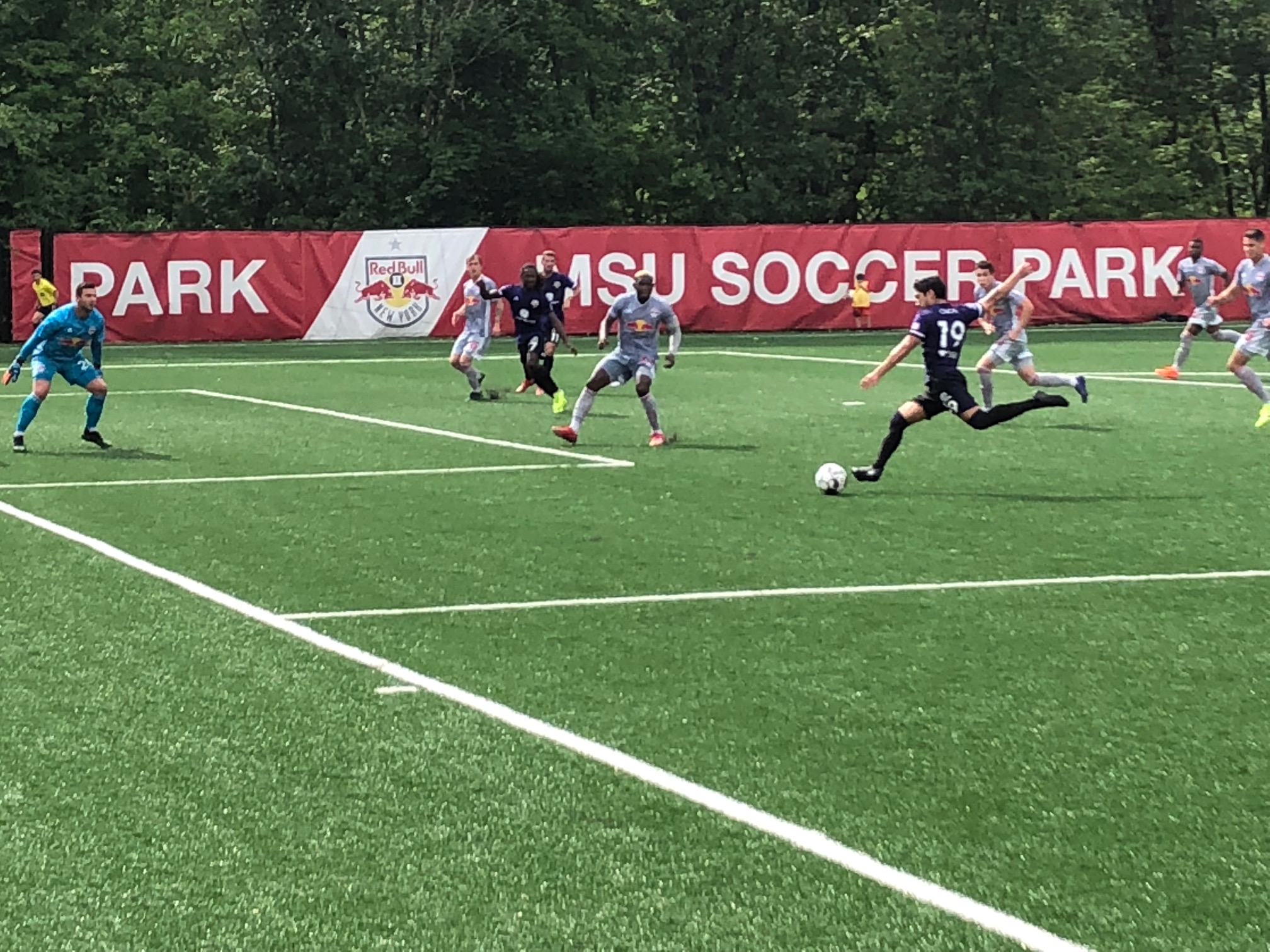 Red Bulls II and Louisville City FC renewed their rivalry Sunday at MSU Soccer Park. It was a hot and humid three o’clock game that lived up to the intensity that this game had.

It was an exciting match to watch. The Red Bulls held momentum in the first half, but had trouble finding the goal. Louisville looked like they had grabbed an early lead when midfielder Magnus Rasmussen found forward Luke Spencer wide open in front of goal for an easy tap-in, but the play was later ruled offsides.

In the eighteenth minute, midfielder Kyle Zajec slid in and won a ball, but Louisville midfielder Napo Matsoso contacted his leg and was issued a yellow card.

Forward Vincent Bezecourt had the best chance of the first half for the baby red bulls. In the 33rd minute, Bezecourt took a shot outside the eighteen that took a deflection and went skimming by the right post and past the outstretched hand of Louisville City Goalkeeper Chris Hubbard.

The Red Bulls were creating on the offense early. Midfielder Jared Stroud nearly got the Red Bulls a goal when he cut in front of the eighteen-yard-box on his right foot and unleashed a great shot that went off the goalkeeper’s hand, off the crossbar, and over the net.

Louisville won a corner kick right before the end of the first half. The cross came in and fell to forward Lucky Mkosana, who had a defender on him. The defender rushed the speedy Mkosana, who rushed a back heel shot that was corralled by Louro.

In the 83rd minute, Mathias Jorgenson broke through for the home side, cashing in on a breakaway. Jorgenson tenaciously attacked the Louisville defense all afternoon, and finally he ended the deadlock with a cool finish late in the second half.

Evan Louro made six saves and the Red Bulls’ defense really stepped up big in the second half to earn their fourth clean sheet.

Louro praised his defense for helping keep the Red Bulls in the game.

“I think the guys in the back did a really good job of kind of give those guys confidence to let them know that we’re holding [Louisville] back until we get the goal.”

The baby Red Bulls moved into second place after Sunday’s victory and have won their last three matches.

“We had a lot of chances in the first half and we couldn’t put them away,” Bezecourt said. “Evan did a really great job at keeping us in the game, and [helping] us get three points today.”

The Baby Red Bulls have played most of their games this season at home and have a great record, but the real test will be when they begin a three-game road-trip next week in Pittsburgh against the Riverhounds.