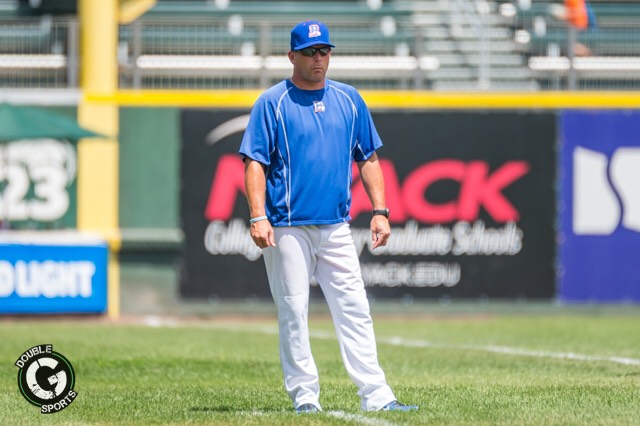 Last week, the Rockland Boulders announced that manager Jamie Keefe would be returning for his sixth season. The 2017 season turned out to be a milestone season for Keefe as he earned his 700th career victory against the Ottawa Champions on June 22nd. The Boulders also broke the franchise record for most regular season wins with 64. Keefe has tallied 241 wins as the manager for Rockland and was named Can-Am League Manager of the Year in 2014 and 2015.

In 2014, Keefe guided the Boulders to their first Can-Am League Championship Title and back-to-back regular season titles in 2014 and 2015. Rockland has made it to the championship series the past three out of four years.

Two days after the announcement, Double G Sports spoke with Keefe on the phone about returning to Rockland.

Double G Sports: How does it feel to be returning for a 6th season managing the Rockland Boulders?

Keefe: “It feels great, first time I have been somewhere six years, Chillicothe for four years and Florence for three years. Being here six years is great and built this thing to where we wanted it to be. Won a championship and been to the finals the last couple of years. It just seemed like yesterday it was 2013 and excited to put together this team together and be ready to go in May.”

“The opportunity to go into my office every day and call that ballpark (Palisades Credit Union Park) and call that ballpark your home is special and with the Rockland fans and support we have gotten the last six years. We’re lucky to have the ballpark and fans, and the success is with the athletes we put on the field and paid off as we watch these guys move on and guys want to play for Rockland and in the Can-Am League.”

“So much goes into the housing, host families and to give guys an opportunity. You can call it scouting, enticing guys to come here and give them a shot. Hopefully we put players in a situation to succeed and opportunity with an MLB organization. Our goal is like any other team, to win baseball games and if we are winning games and big part of it is to be seen and showcase their talents hopefully.”

“We have set the bar high and all we want to do is get in the playoffs and our goal, if we are clicking on all cylinders, is to get to the finals. We made a good run last year, and no doubt about it was bittersweet, but we gave ourselves a chance to get into the playoffs and finals but didn’t close the deal. The professionals we have brought in have touched the hearts of these fans and shown what minor league baseball is about and made it fun.”

Double G Sports: Also announced recently that Shawn Reilly had been named team president of the Rockland Boulders, can you describe the relationship with Shawn the past five seasons?

Keefe: “The relationship with Shawn has evolved over the years, and that was a huge reason for coming here and giving me an opportunity to interview for the job. All the hard work he has put in has really paid off, and we have made a good team and making sure the team is headed in the right direction. I want to continue to be here with him and make sure this organization makes money in the area for a long time.

Double G Sports: Every year the roster has undergone major changes, how do you adapt to that and be able to field winning teams’ on a consistent basis?

Keefe: “It’s all about change, we had our core players, and it changes from year to year and last couple of years’. Jerod (Edmondson) and Marcus (Nidiffer) to Marcus (Nidiffer), (Richard)Salazar and Junior (Arrojo) and now Marcus (Nidiffer) and (Richard) Salazar. Someone always steps up and takes a bigger role in the clubhouse. It’s always about having the right people and the goal to win and make the playoffs and opportunity for that last game of the year and know what it feels like to raise that trophy and do that one more time over our heads.”

“Watching a guy like Joe Maloney mature from the 2014 season to here is today and get another opportunity in making a Double or Triple-A club and who knows what can happen and see it with (Stephen) Cardullo. I hope he stays and continues to showcase his skills. To come back last season and watch him was just remarkable.”

“The thing he could do with his athleticism and knowing I could put him in left, center or right field and can play as well as anybody makes him a special athlete.”