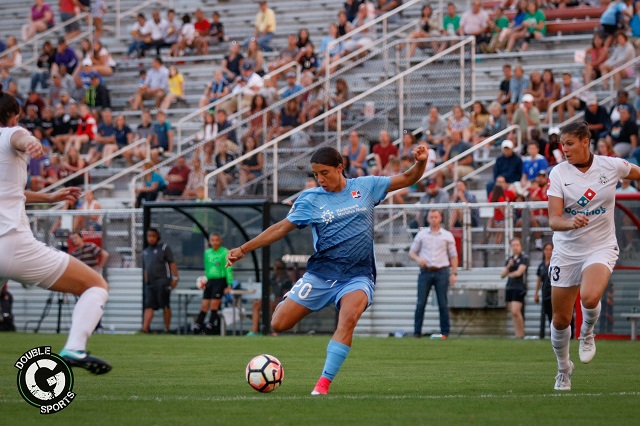 Sky Blue FC entered Saturday’s contest in fourth place after a huge win over the North Carolina Courage.  After 45 minutes at home, Christy Holly’s team was down 2-0 and looking sluggish.  Defender Mandy Freeman went down in the 27th minute and FC Kansas took advantage right away.  Katie Bowen scored her first professional goal in the 29th minute to give FC Kansas City the 1-0 lead.  Christina Gibbons added to the tally in the 42nd minute. The two-time champions led in shots (15-6)and duels won (62%) in the opening half. Overall, Kansas was outplaying Sky Blue.

Sky Blue was being smothered early by FCKC, both goals in the first half transpired because of poor clearances by New Jersey.  As the xx minutes of added time waned, deadly Kansas striker seemed to have defender Erica Skroski beat.  Skroski, in a show of gamesmanship, pulled on Groom’s jersey to break-up the attack.  In response, Groom initiated a different type of attack and swung her fist towards the face of Skroski.

After some consultation, head referee Amber O’Conner presented Skroski with a yellow card.  As the fans reacted with disdain to the call, O’Conner walked over to Groom and issued a red card.  FC Kansas would play the remained of the contest with 10 players.

Three strikes for the win

In the second half, Sky Blue played hungrily; almost desperately.  Keeper Kailen Sheridan weighed in on the mentality going into the final 45 minutes, “We did break down a few times and that’s on us.  We made the mistakes and we let them capitalize on them, but we just showed how strong of a team we are by coming back out here and putting three in the back of the net.”

All three goals for Sky Blue came between the 78th and 90th minutes of the game. Additionally, all three goals were scored by Sam Kerr. She, like her teammates was disappointed at the half, and felt that she personally needed to step her game up. “In the first half, I thought I struggled mentally. I was out of the game, I was just getting really frustrated. And, at halftime, I don’t think I said one word – just kinda getting myself back into it … “

In her case, she found her rhythm in the silence and crafted a huge comeback win for New Jersey.  With her three goals last night, Kerr owns the club record and league record in career goals scored (35) and is tied with Megan Rapinoe for goals this season (9). She also joins Nadia Nadim as the only Sky Blue player with a hat trick, and recorded the first professional three-goal performance at Yurcak Field.

The team is pleased they were able to get the win, and at no point was settling for a draw even an option, “Coming back home, and being able to bring the win home is incredibly huge for us,” said Sheridan.  The Canadian keeper added, “having three points over one point is definitely a big improvement for us. it’s something that we talked about at the half is – we’re not settling. We’re coming out here, and we’re getting the win.”

Both teams were frustrated with aspect of their play Saturday night. Head coach Vladko Andonovski felt hard done by the officials,

“You know, I think it was a great game. Obviously we came out [in] the first half and dominated the game, and then you saw what happened in the last minute. I mean, first the call, I don’t know. Instead of being the other way around – red card for them and yellow card for us – this is what the referee did. And, I’m usually at least trying to be quiet and not say anything, but this league has some very good referees, but some of the referees are the worst in the whole world. And, unfortunately, if we want this league to go forward, if we want good players to come [to] this league, if we want players to come, something needs to happen, because it happened to us last game … I don’t know what to do. I keep motivating the players, telling them we can’t change anything, but it gets [to be] too much. You can only do so much. I think that – I’m proud of [my team] for trying to overcome all the challenges that were in front of them.”

Coming into Saturday’s game, FC Kansas City was 3-5-4. The team lost to Houston on July 2nd after having Lo’eau LaBonta sent off with two yellow cards. The week before, FCKC benefitted from a red card to Seattle on June 24, but only earned a draw (1-1) in the match. From his remarks, it didn’t appear Andonovski was reserving his criticism to this game.  He also alluded that other coaches felt the same,

“Obviously, I don’t want to take anything away from Sky Blue and [Sam] Kerr – beautiful play by them and I congratulate them on the win, but [at] the same time you know, I cannot be quiet anymore about the way the referees are reffing these games …I’ve talked to at least six, seven coaches in the league. Everybody agrees that something needs to happen because this is the best league in the world. Hands down, there’s no question. The referees are not even close to – I’m not talking all the referees, okay. Like I said, we’ve had some great ones, even [in] the games that we lost. But, tonight was one of the worst ones.”

Holly has shared his frustration with officiating in the past, and Carli Lloyd too expressed frustration after receiving a late red card in Houston’s match against the Portland Thorns. Naturally, every player and coach has their gripes with officiating, but are we hearing enough noise for the league to take a look? It will be interesting to see if the newly-formed NWSL Players Association chooses to address these issues at some point.

With the win, coupled with the other results from the week, Sky Blue FC (22 points) now sits in third place behind the Chicago Red Stars (24 points) and ahead of the Seattle Reign (20 points). New Jersey will host the Chicago Red Stars for the final meeting between the two sides for the season.  Chicago defeated Sky Blue 2-1 on June 25, and essentially doused any playoff hopes for New Jersey in a 3-1 win at Yurcak last August.  Chicago is a perennial playoff team looking to get to its first final.  Sky Blue is a team hoping to be better than the best of the rest and clinch its first playoff berth in the NWSL.

Three points outright places Sky Blue in second place, and in more control of their own destiny.  Yesterday’s win did a lot to show the fight in Holly’s team, but he knows they haven’t peaked yet.  When asked what button and levers still need to be toggled, Holly replied, “if there was a consistency button … [coming into the season] we wanted to focus on us. Our focus is growth and our focus was improvement.”  Now that his club is getting some attention, he hopes the hard work of players like Kerr, Kelley O’Hara and Maya Hayes is on display for all to see. However, the consistency comes not from the league or fan accolades. It comes from the team deciding to put it all together, “if we can improve our [individual] performances, and our ripple effect of our performances improves that of the person next to us, we’ll find that consistency part.”