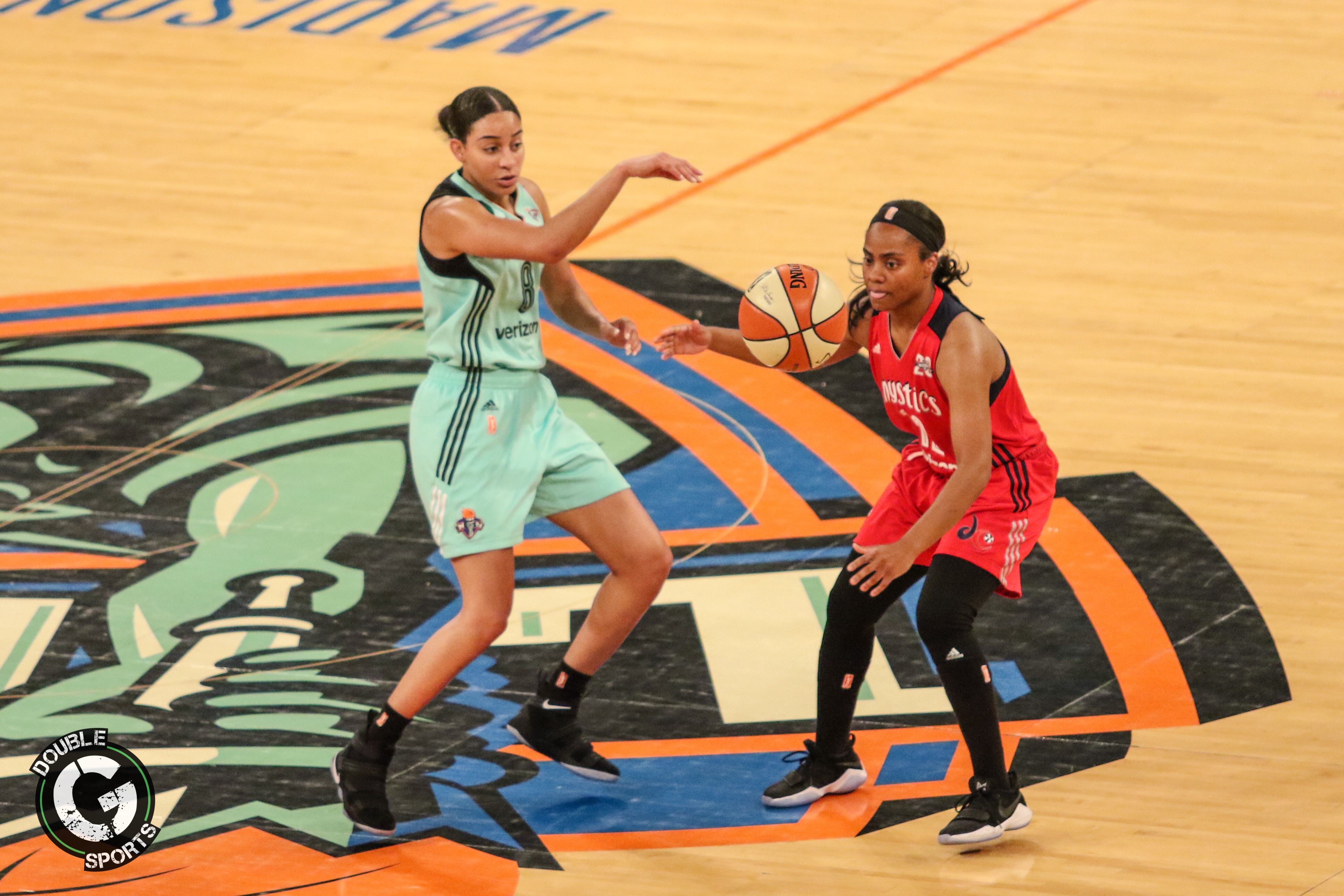 The hot shooting of Kristi Toliver led the Washington Mystics past New York.

The thing about hot streaks, they usually don’t last as long as you would like them to be. The New York Liberty had high hopes and expectations for this season, and all of that came to a crashing end on Sunday.

The New York Liberty fell to the Washington Mystics 82-68 in the second round of the WNBA Playoffs on Sunday afternoon at The Garden. Tina Charles finished with 18 points and Bria Hartley scored 15 points for New York. Kristi Toliver hit a WNBA record nine 3-pointers for Washington and scored 32 points.

New York finished the 2017 season with a 22-12 record in the regular season. Washington advances to play the Minnesota Lynx in the WNBA semifinals, leaving the Liberty wondering what happened to a promising season.

“I think Kristi Toliver happened,” said Liberty forward and WNBA great, Tina Charles. “Her three’s added up. It got us kind of turned around…I think she made eight or nine three’s. That killed us.”

The Liberty got out to a big lead in the 1st half, going up 29-15 on a Tina Charles 3-pointer with 8:05 left in the 2nd quarter. The Mystics were able to draw to within six points by halftime as Toliver started to heat up from the outside; she scored 12 of her 32 points on the 2nd quarter when she sunk 3 3-pointers.

Washington opened the 2nd half on an 18-3 run and led the rest of the way. Again, it was Toliver leading the way, she nailed 5-of-6 3-pointers in the 3rd period, and New York was unable to draw to closer than nine points down the stretch.

“That was my biggest fear going into this game, (Kristi) Toliver making the ungodly shots that does every now-and-then.” Liberty head coach Bill Laimbeer saying after the game? “We were in her space for a vast majority of those. She played great. She made all the big shots. Any opening that she had, she released it quickly before we can get a hand on the ball and they went in. Great players do that and she was one of the big differences in the game but not the only one.”

Toliver’s long-range shooting, and aggressiveness in finding her spots on the floor, forced a Liberty defense to dedicate extra help on her. This had the deadly consequence of leaving perennial all-star, Elena Delle Donne, free to ravage the paint and hit vintage jumpers. She and Toliver combined for 50 points.

“I’ve never witnessed something like that,” said Delle Donne. “We just rode her weight today. She was unconscious…When she’s going off like that, we just do all the little things and let her go. Offensively, she took over.”

“The greatest thing about Kristi is that—as a general rule—you can miss shots early, and that doesn’t change her mindset,” said Mystics head coach, Mike Thibault. “I think to win at this level, to win big games, you have to have several players who don’t mind taking pressure shots.”

The Mystics came into the season with high expectations after trading for Elena Delle Donne and signing Toliver as a free agent. Coach Mike Thibault knew it might take some time for his team to gain chemistry with so many faces. It didn’t help that the team faced a series of injuries throughout the season, including time missed by Delle Donne to an ankle injury and then a torn ligament in her left thumb. Even with all the injuries and already advancing in a single elimination game, the Mystics were already a battle tested team.

Everything the Liberty did right during the Ten game winning streak, went completely wrong agaisnt The Mystics. New York had the best rebounding team in the league this season. Not surprisingly, it outrebounded Washington in all three contests between both teams during the regular season. However, the Mystics were able to beat the Liberty at its own game and dominate the glass on Sunday.

“The biggest component of this game was the reboundin. Liberty Head Coach Bill Laimbeer said afterwards.”They dominated the rebounding against us, 14-3 on the offensive rebounds, but another big, glaring statistic that no one pays attention to was team rebounds was 14-2. Which means all of the loose balls that went out of bounds after a rebound went their way. They took it to us on the rebounding. We knew that was a big key and we didn’t get it done. So when we shoot 45 to 39 against their team, we should be right there to win a game but the rebounding and the turnovers were the big disparity and they got 20 more shots than us. That was really the deciding factor. That’s not us. That’s not who we are, that’s not how we hang our hat and when that happens to us we deserve to get spanked and that’s what happened.”

What’s Next For The Liberty ?

The season is over for the Liberty. They will look back on a season that could have been glorious. If the team didn’t start the season stumbling out the gate, who knows if they would have been playing in this single elimination format. In the end, it’s another one and done season. Another 20 plus win season down the drain leaving everyone to ask when will the Liberty capture it’s first WNBA Championship?