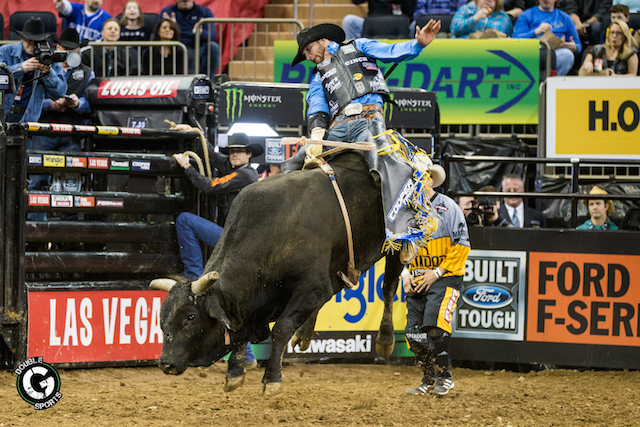 Last year’s ‘Rookie of the Year’ earns the No. 1 spot at the PBR’s #PBRBuckOff event at MSG

This year, Jess Lockwood, would show just why he won last year’s ‘Rookie of the Year’ title and be crowned the event winner, taking home a total purse of $117,183.33. Jess has likely had an exciting weekend in The Big Apple, beginning with a trip to the New York Stock Exchange, closing with a photo of Jess, surrounded by beautiful Monster Energy girls, who were holding up supersized checks. Jess was super stoked and is well poised to bring home the World Championship title in November when PBR finishes up its annual tour in Las Vegas, Nevada. Of course, there’s a lot of bull riding to take place between now and then, and lots of cowboys plan to give Jess a run for the money, including last year’s winner Cooper Davis.

It was not too long ago that Cooper Davis was all smiles in Las Vegas, when he captured the PBR World Championship title and carried his son Mackston at T-Mobile Arena holding an oversized check in the amount of $1,000,000 after collecting his winnings. Back then, Davis had done what he needed to do and the young man from Jasper, Texas moved into the top spot on the last day of competition. Cooper was quoted as saying, “You need to set goals that are realistic and believe in yourself to get it done,” and by golly, last year he got it done, only it’s a new year.

New Year’s Day is a great day for setting goals, and what better goal for Cooper Davis than to repeat his stellar performance and bring home another PBR Championship title? Only the beginning of this year’s ‘Built Tough Ford Series,’ PBR tour, did not start off so well for Davis. While there were chants at Madison Square Garden, yelling ‘Cooper, Cooper’ and many were expecting to see Davis deliver, he failed to stay the entire eight seconds, and was bucked off, just before the first night of rounds ended during the opening night of the first Professional Bull Riding event in 2017. No, this weekend would belong to Jess Lockwood, who would finish on top, with total points of 860. Marco Eguchi would follow with a distant 550, and Ryan Dirteater close out third place with 378.33. Lockwood rode bulls, Naughty List, pitch Black, X Factor and Dennis the Menace. The bulls scored 43, 40.75, 43.25 and 42.75 respectively and Lockwood’s total scores for the four rounds were 82.25, 82.25, 87.25 and 87.75. Last year, Lockwood participated in 48 rides, and earned a total of 2903.33 points. He placed in the top-five, seventeen times, and the top-ten, twenty five times. His total earning for the year totaled $177,778.68 and one can venture to guess that this year, he’s well on his way toward earning far more.

For those of you who have never been to a live PBR event, it’s a sight to behold when the cowboys come to the big city. With riders named Stormy Wing, and bulls named Who Dey, plus lots of celebrities in the crowd, including professional athletes from the New England Patriots, our New Jersey Devils and more, it’s beginning to be the most talked about event that starts off the New Year. For a look at the standings thus far, and complete details on how the bulls and the riders did this weekend, you can head to PBR.com

The World Finals will take place in Las Vegas, Nevada, November 1-5. On deck, the Chicago Invitational, January 13-15. It will be exciting to see if the bulls can continue to buck off, and who ends up on top.

Two NJ Copa FC Players in the Preliminary List for the 2017 NWSL College Draft
Images: PBR Hosts Buck Off at the Garden