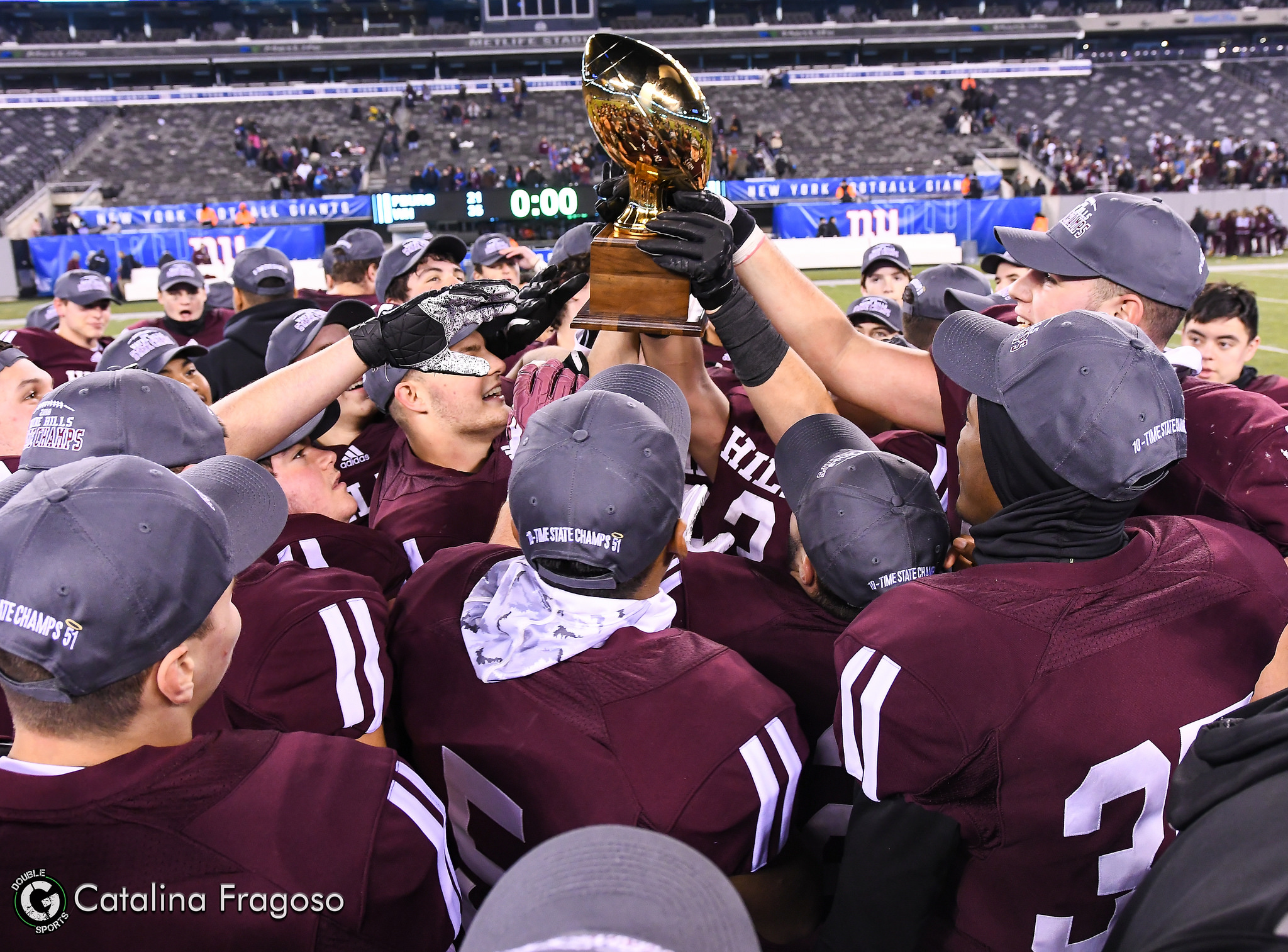 The final 3:43 of the first half could not have ended any worse for Wayne Hills (11-2) in the North Group 4 Bowl Championship Game against Phillipsburg (10-3) at Met Life Stadium on Friday night. They were unable to contain quarterback Jack Staggard, who threw his second passing touchdown to Ray Poremba tying the game up at 14-14.

On the ensuing kickoff, two Patriots players converged attempting to catch the ball. The ball ended up dropping through allowing the Stateliners to recover the ball at the Wayne Hills 28. Facing a fourth and one at the four-yard line, Phillipsburg caught a break as the Patriots were called for defensive encroachment setting up a first and goal at the two. One play later, Staggard capped the drive and impressive first half with a three-yard score. Overall Staggard completed 14 of 17 passes for 105 yards and two touchdowns while rushing seven times for 61 yards.

However, the Patriots came out of the locker room a different team in the second half. Having connected on a 27-yard touchdown pass to Charles Njoku in the first half, quarterback Tom Sharkey hooked up with Njoku on the same amount of yardage along the left sidelines as Njoku hauled in the ball while backpedaling into the end zone with 8:16 left.

“We felt we didn’t play well in the first half, only down seven points and we felt fortunate,” said Wayne Hills Head Coach Wayne Demikoff. “In the second half we picked it up, and the kids gave us great effort. All year that’s who we are, Charles, Jaaron (Hayek) and Tommy ran the ball well and offense today.”

Meanwhile, the Patriots defense came out swarming holding Staggard to just 19 yards of passing and 18 yards of rushing while picking off two passes. After Sterling Walker-Sutton returned a short punt to the Wayne Hills 21, it seemed Phillipsburg was primed to tie up the game, but the Wayne Hills defense rose to the occasion stopping Staggard short of the first down marker on fourth and three.

Seizing upon the momentum swing, Sharkey orchestrated a seven-play, 85-yard drive finishing it off hitting Njoku in the flat. Njoku took care of the rest shaking off a defender and rambling down the left sidelines untouched putting the Patriots back on top 28-21 with 10:40 remaining in the fourth quarter. Running back Adam Abida provided the final dagger rushing for a 21-yard touchdown run with less than eight minutes to go.

Sharkey ended up completing 13 of 20 passes for 203 yards while Njoku reeled in four catches for 106 yards. Hayek carried the ball seven times for 92 yards, including a 64-yard touchdown in the first quarter, while catching seven passes for 61 yards.

“We talked to our kids about winning as a team and it takes everybody,” Demikoff said. “We were throwing the ball deep and making plays but the guys up front were blocking.”

“We’re thrilled to be the first team in North Group 4 to do it and proud of that because winning is hard at any level and place.”

Njoku on catching three touchdowns from Sharkey: “Tom is unbelievable. I think he is the best quarterback in the state in my opinion and he is such a great leader and made it happen tonight.”

Sharkey on the job of the offensive line: “It just wasn’t tonight, throughout the whole year they have done an amazing job. Right down the line, Joe Randi at left tackle, Ben Kurzer at left guard, Gabe Kuhn at center, Gabe Dellechiaie at left guard and Bence Polgar at right guard.”