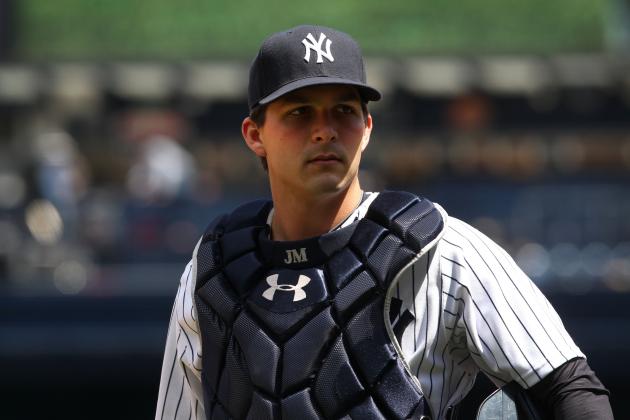 On Saturday, the Yankees retired longtime catcher Jorge Posada’s No. 20 and unveiled a plaque in Monument Park honoring his 17-year career. The Yankees are now four seasons removed from having the Core Four stalwart as their everyday guy behind the plate. In that time, they’ve used eight different starting catchers with a variety of results. Last winter, the Yankees gave Brian McCann $85 million after growing tired of waiting for the catching pipeline to produce results and the Chris Stewart debacle of 2013.

For years we have been hearing about the catching prospects that were supposed to make the Yankees set at the position for the future. The heir apparent to Posada appeared to be Jesus Montero, who was traded in 2012 and has been a bust in Seattle. There’s Austin Romine, who is toiling in Scranton after not hitting enough to stick in the big leagues. And then there’s Gary Sanchez, who is still only 22-years old even if it feel likes he’s been in the organization for ten years.

But there was also John Ryan Murphy, the one catching prospect who was so anonymous that somewhere along the way the Yankees started referring to him as J.R. And it wasn’t until a few winters ago that he worked up the courage to ask that he be called John Ryan, as he had been all of his life.

“I’ve always been John Ryan to my family,” he told Bronxpinstripes.com. “It was only a baseball thing that they shortened my name to J.R.”

Born and raised in Bradenton, Florida, Murphy majored in baseball in high school — sort of, anyway. He attended high school at the IMG Sports Academy in Bradenton, Fla., where he worked on preparing for a baseball career every school day, either in the speed-and-conditioning room or on the field. For many, it’s not an easy decision to give up a normal high school experience in pursuit of athletic excellence, but for Murphy the decision was made easier by the fact that he grew up around IMG.

“My mother has been there since day one so I just kind of grew up around IMG,” said Murphy, whose mother, Caroline, was the admissions director after being recruited by famous tennis instructor Nick Bollettieri to help launch the academy that began with tennis and eventually branched out to other sports. “Then when it was time for high school, my parents asked me where I wanted to go and I said IMG. So I knew what it was going to be on the baseball side of things and I was excited about it and I wanted to do it.”

Murphy became one of the most highly touted high school baseball players in the country after putting up video game numbers in 2009. Murphy, who switched to catcher before the start of his senior season after playing on the corners of the infield for three years, had a .627 batting average, 11 home runs, 66 RBIs and 34 extra-base hits in 102 at-bats. He had verbally committed to the University of Miami, which meant everything to a kid who had long dreamed of playing baseball for the Hurricanes.

But everything changed when the Yankees selected the Pendleton School graduate with the 76th pick in the second round of the 2009 draft. In the end, Murphy, who grew up as a fan of the Boston Red Sox, picked the archrival Yankees and their $1.25 million signing bonus over the Hurricanes.

“It wasn’t an easy decision,” Murphy admitted to me in the Yankee locker room. “I have a lot of family in Miami and that was really my dream growing up, was to go to the University of Miami. That became a reality and then the whole draft thing kind of came up quickly in the last minute. It was just an offer that I couldn’t pass up.”

Murphy quickly ascended through their minor league system and debuted as a September call-up in 2013, a stint that saw him be the one to call Mariano Rivera’s final pitch. He competed with Francisco Cervelli and Romine to be the backup catcher for the Yankees in spring training last year. Cervelli won the job, and Murphy was optioned to the minor leagues. But Cervelli suffered a hamstring injury in early April, and was placed on the 60 day disabled list, resulting in the Yankees calling up Murphy to replace Cervelli as the backup.

Murphy remained with the Yankees until mid-June, when Cervelli was activated from the disabled list and he was optioned back down to Scranton Wilkes-Barre. During the off-season, the Yankees traded Cervelli to the Pittsburgh Pirates, leaving Murphy and Romine in the running to become McCann’s new backup. The two young catchers competed with each other in the spring, but the 24-year old Murphy won the competition and a chance to learn from some of the best in the catching business.

“He’s like a big brother to me,” Murphy said about his mentor-mentee relationship with McCann. “He’s helped me countless ways and I can’t thank him enough. Him and Gary Tuck both were in constant communication and we have Joe (Girardi) and Tony (Pena) as well. So it’s impossible for me to not learn from guys on this team.”

It was nice to see the Yankees give the youngster a chance instead of going with a veteran — your typical backup catcher. All in all, Murphy has done a solid job thus far in limited action and in 15 games since July 23, he is batting .318 (14-44) to raise his season batting average from .247 to .273. But while he is contributing on the field for the Yankees, he is also contributing off the field. He is a co-founder of the IamMore Foundation, which is a charitable organization that he has been involved with since day one.

“My best friend from high school at IMG, her name is Catherine Leibbrandt, and she came to me a couple of years ago because of her own medical diagnosis and she wanted to start this foundation,” Murphy said. “We really just started it from scratch and we are still very new and very young, but we have a website, we are 501C3. It’s kind of a spinoff of Make-A-Wish. We have continual support and relationships with the kids that we work with. No specific diagnosis, just any kid with special needs or any sort of illness or disability and really just allow them to see who they are is much more than their medical diagnosis.”

While Romine and Sanchez are still in the Yankees organization, with Sanchez reaching Triple-A a few weeks back, Murphy is the one who is viewed as the catcher who eventually will nudge McCann to the designated hitter role and be their No. 1 guy. But in the meantime, all he can do is worry about himself.

“Honestly, I always had the approach since I signed that I’m just going to go one day at a time,” said Murphy, who has been lauded by the team’s front office for his game management and pitch-calling ability. “A lot of those things are out of my control and what I can control is my attitude everyday and how I can play. So that’s what I’ll continue to do.”

Rutgers Football set to Defend Lambert-Meadowlands Trophy in Its Second Season in the Big Ten
Spieth Cut at the Barclays; Watson, Stenson, Johnson and Duffner Make their Move as Finau Doesn’t Back Down
Posting....