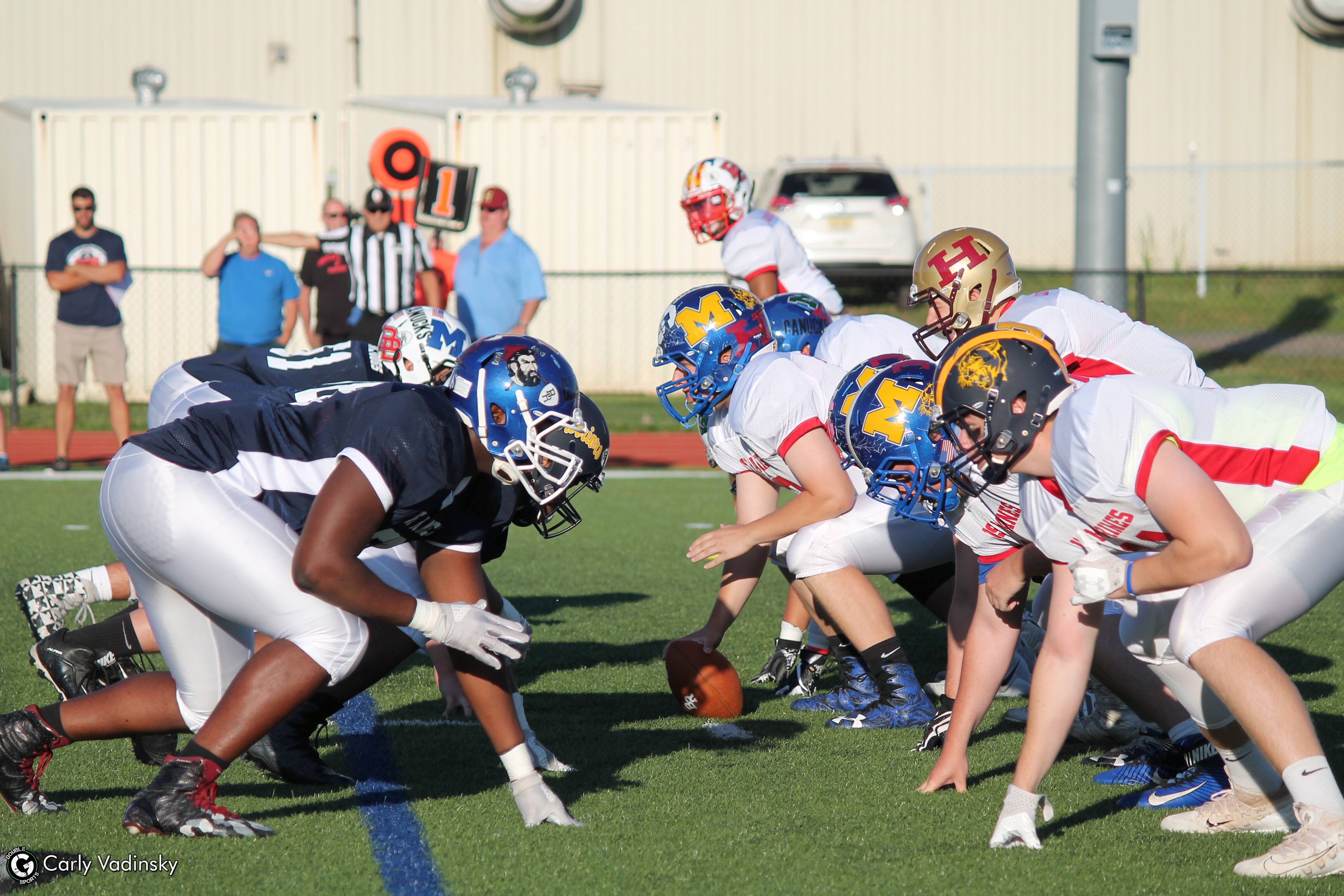 The Leathernecks secured a 21-3 Basilone Bowl victory over the Devil Dogs behind the rowdy offense exploding for three touchdowns. The matchup was played in tribute to the military as the Marines presence was felt on Thursday night, leaving an impact in the atmosphere on John Basilone field in Bridgewater.

Tyler Boatwright, who also won the Leathernecks MVP award, said, “I was just looking to have fun because it was the last time I was going to come out with my teammates, so that was special.” He is a senior running back from Hillsborough who ran for a total of 41 yards with a touchdown.

The Devil Dogs jumped out to a 3-0 lead in the first quarter off a 15-yard field goal from Watchung Hills kicker Brian Puccio. Before the kick, Devil Dogs QB Lofton Hoover ran for 20 yards to set his team up for the kick. 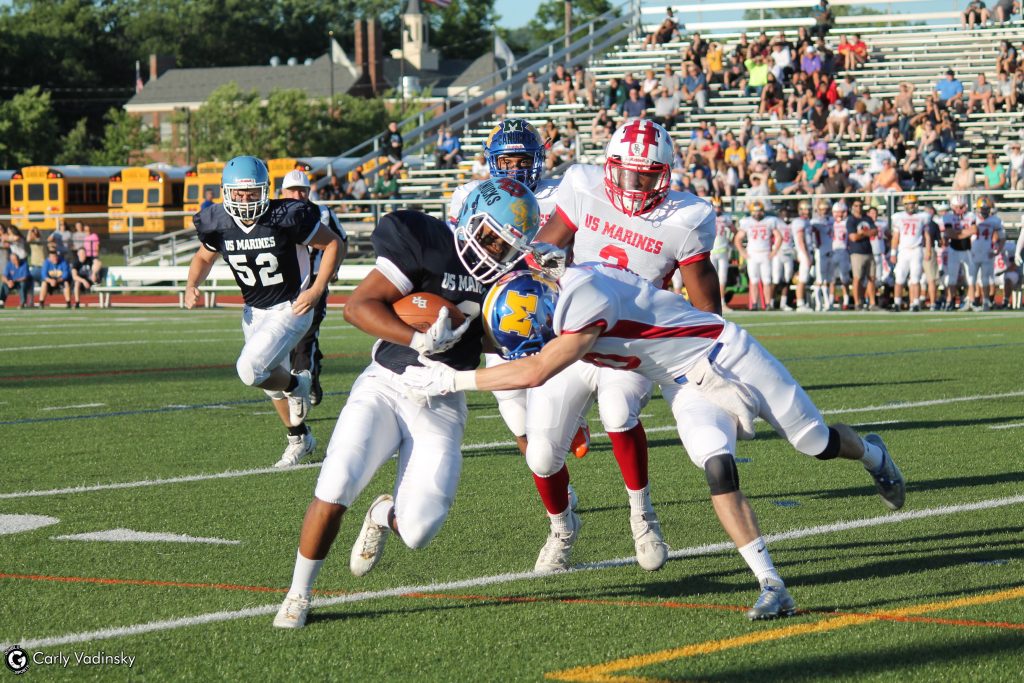 After the Devil Dogs opened up the second quarter with a three and out possession, the Leathernecks found their way to the end zone for the second time. This time a pass from Leatherneck QB Jared Pershyn to connect with wide receiver Ryan Gogerty. Gogerty broke a few tackles after the catch to run it back for the score.

After the scoreless third quarter, both teams continued to struggle finding the end zone. With 5:43 remaining in the fourth quarter, it was a series of runs from Boatwright to Ridge running back, R.J. Milligan, and Boatwright again that got the Leathernecks their final touchdown of the night. Milligan picked up 29 yards on his run before Boatwright took it in to the end zone from eight yards out, on the handoff from fellow Hillsborough teammate QB Matt Moore. 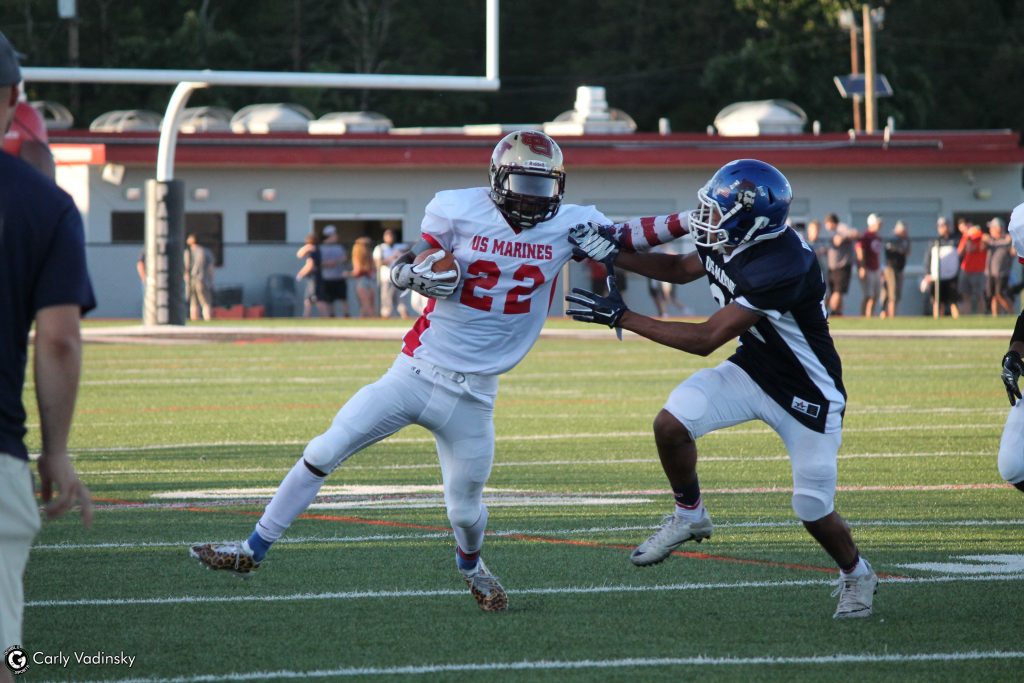 For the Leathernecks, offensive MVP was Ryan Gogerty from Basking Ridge. On the defensive side it was LB Ryan Hrabinski of Somerville named MVP. Tykey Reinberry from Franklin won Devil Dogs overall MVP, and for the Leathernecks was Hillsborough’s own Tyler Boatwright.