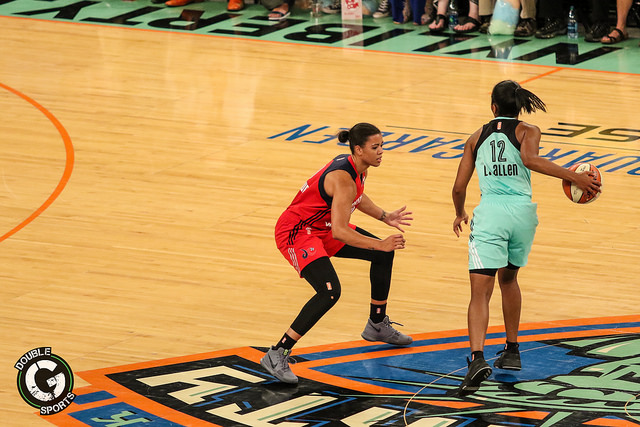 The New York Liberty will face the Washington Mystics in a winner-take-all WNBA Playoffs 2nd Round game on Sunday, Sept. 10, at The Garden at 5 PM.  The Liberty reeled off their third straight 20+ win season, but are still searching for their elusive first title since debuting as one of the WNBA’s original teams in 1997. The Mystics advanced past the first round for the first time since 2002 and have their sights set on their first Finals appearance.

This is the fourth time these two teams have squared off in the postseason, with New York winning all three previous series. The Liberty hold a 6-2 record against Washington in the postseason.

The Liberty surged to 3rd place in the WNBA and 1st in the Eastern Conference by winning 10-straight games to close out the regular season. The 10-game winning streak matched a franchise record from 2010 and is also the most consecutive wins to end the regular season WNBA history.

The Liberty have lost must-win games at home in Madison Square Garden each of the past two years. In 2015, it was Game 3 of the Eastern Conference finals to Indiana. Last season, it was the single-elimination second-round game to Phoenix, as the WNBA started its new playoff format.

Charles In Charge Of This Liberty Playoff Run

Charles put together yet another outstanding year for the Liberty, as she averaged 19.7 points (third in the WNBA) and 9.4 rebounds (fourth) for the season. It’s become nearly routine for Charles to finish among the league leaders in points and rebounds each year as she threatens to average 20-10.

The Bench Will Be Key For This Playoff Run

When the Liberty made a change to its starting lineup midway through the season, with explosive guard Sugar Rodgers coming off the bench, New York saw a big production increase from its 2nd unit. Through 17 games, New York ranked last in the WNBA averaging 14.8 bench points per game, but over the final 17 games of the year, the Liberty averaged 24.0 ppg from its 2nd unit. This allowed the Liberty to improve to 9th in the league, at 19.7 ppg, and the 24.0 ppg if averaged over the course of the season would have been the 4th-best mark in the WNBA. New York went 14-3 during the 2nd half of the season.

Krystal Thomas Could Be a Problem For The Liberty

The Liberty can’t overlook Mystics center Krystal Thomas, either: She had one of her best games of the season — 17 points and nine rebounds — against New York on Aug. 25. In the first-round win over Dallas, she had 17 rebounds.

Some Hardware Was Already Award To Some Liberty Players

Epiphanny Prince was named the Associated Press WNBA Comeback Player of the Year and Sugar Rodgers was tabbed as the AP Sixth Woman of the Year. Additionally, Liberty forward Tina Charles was named AP 1st Team All-WNBA. Prince missed all by 6 games in 2016 while recovering from a torn ACL suffered in Nov. 2015. She returned healthy for 2017 and averaged 12.0 ppg, to go along with 3.6 rebounds, 2.9 assists, and 1.3 steals per game. Rodgers became a critical member of a Liberty 2nd unit that developed into one of the best in the league over the 2nd half of the season. For the year, she ranked 5th on the team averaging 10.5 ppg, and again was one of the best 3-point shooters in the WNBA, knocking down 63 triples, which ranked 6th. Charles, who finished the season ranked 3rd in the WNBA in scoring (19.7 ppg) and 4th in rebounding (9.4 rpg) also recorded 12 double-doubles.

The Liberty had a roller coaster season. The ride now takes a different approach in this winner moves on battle. Expect a fired up and focus Tina Charles to lead the Liberty to a close victory. Expect the Liberty back court to really dictate the pace of the game.