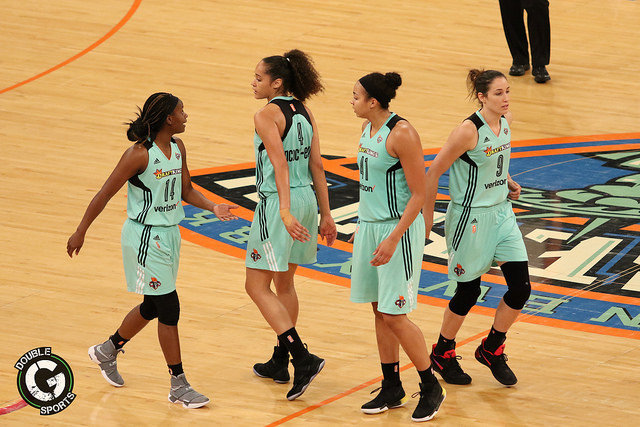 After a five-game run on the road, the Liberty wrapped up the tour against the defending WNBA champions. Candace Parker scored 24 points, and Odyssey Sims added 20 to help the Los Angeles Sparks cruise by the New York Liberty, 87-74, Friday night. Bria Hartley scored 16 points for New York (12-12) and Tina Charles added 10 in just 23 minutes. The Sparks are the defending champs for a reason. Unfortunately, the Liberty found that out the hard way.

The game was the last of a season-long 5-game road trip for the Liberty, it’s longest since the 2012 season; New York went 2-3 on the current road trip and fell to 5-8 on the road this season.

How The Liberty Lost The Game

After falling behind 8-0 to start the game, New York came back to take a brief 1-point lead in the 2nd quarter and tied the game by halftime. After scoring the 1st basket of the 2nd half, New York saw the Sparks answer with a 20-5 run to take control of the game. Los Angeles led by 14 heading into the final quarter. The Liberty turned the ball over 14 times, which led to 19 points for Los Angeles. Between the points of turnovers and the Sparks 17-22 from the free throw line, it was easy points for the Sparks and that made playing catch up in the 4th quarter, almost impossible for the Liberty to overcome. The Liberty are 3-11 when trailing into the 4th quarter. That isn’t championship level basketball.

“I think it’s credit to the team. We showed good resilience in the first half,” said Liberty Head Coach Bill Laimbeer. “This has been a long, long stretch for the last six weeks for us, two long road trips, and we got a little tired, but we regrouped and then the third quarter we just turned the ball over and gave them the lead.”

The Liberty Are Finally Coming Home

New York returns home to Madison Square Garden to face the Indiana Fever on Tuesday, Aug. 8. Tip off is scheduled for 7 PM. This will be the Liberty first home game since July 19th.