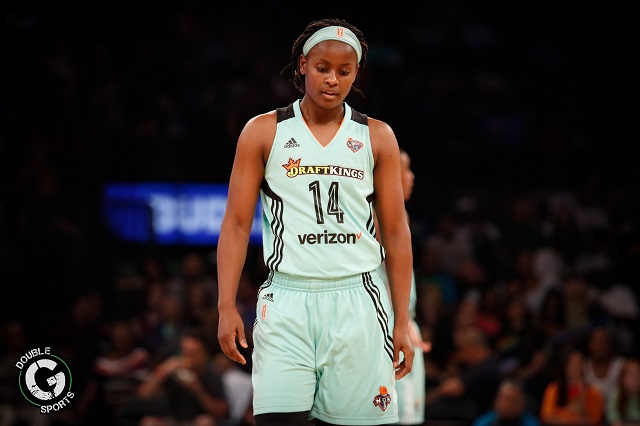 After recently clinching another playoff berth, the New York Liberty continued it’s late season surge in Indiana last night. The Fever were no match for the streaking Liberty, as New York pushed it’s latest winning streak to six, by cooling off the Fever  71-50.  Sugar Rodgers led four Liberty players in double figures with 16 points, and Tina Charles finished with 13 points and nine rebounds.

The Liberty held the Fever to just 50, a season low in scoring for Liberty opponents, and Indiana was the 4th team over the last five games to shoot under 40 percent (.345). The Liberty built an 18-point lead in the first half, when Rodgers scored all 16 of her points.

Indiana was able to cut the lead down to nine on the first possession of the second half, but never any closer as Bria Hartley nailed a 3-pointer; she finished with 12 points. Jeanette Pohlen-Mavunga, the Fever’s best 3-point shooter, went 0-of-4 from deep. The whole team went cold from long range, sinking just 1-of-10. Defense wins championships, and it looks like the Liberty are well on their way to a championship run. These last few games will tell us if that’s the case.

Sugar Rodgers came off the bench to lead all scorers with 16 points in the Liberty’s 71-50 win over the Indiana Fever on Aug. 23. Rodgers, who hit her first five shots from the field, including a pair of 3-pointers, matched her highest point total since Aug. 1, when she posted 16 points at San Antonio. It was just the third time this season she led the Liberty in scoring, and the first since June 11.

The Real Change In The Liberty Fortune Started At The Point

Prior to the game against the Washington Mystics on July 16, the Liberty made a change to the starting lineup, inserting Bria Hartley at point guard, while allowing Epiphanny Prince to play shooting guard, with Sugar Rodgers providing fire power off the bench. Since then, New York has gone 10-3, and seen improvement across the board in nearly every offensive category, in some places drastically, particularly defensively with an opponent ppg that has decreased by more than six ppg.

What’s Next For The Liberty ?

The Liberty will play its next three games at The Garden, starting with a Friday night matchup against the Washington Mystics that figures to have implications on WNBA Playoffs seeding. New York currently leads the Mystics by just a half game for fourth place, and the teams have split their regular season meetings to this point. Tipoff is scheduled for 7:30 PM.

Slow Down Cleveland, That Brooklyn Nets Draft Pick Might Not Be Too Valuable
Big3 League Announces First League MVP and Fox Sports One Renewal
Posting....