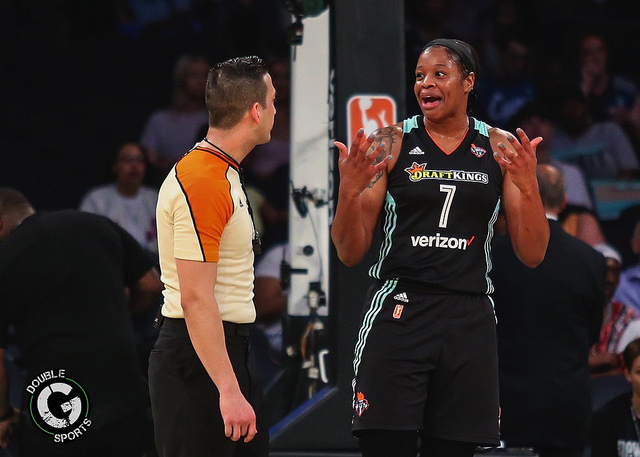 The defending WNBA Champions, Los Angeles Sparks  dominated the second half to cap off a disappointing east coast road trip. The Sparks (3-2) led 66-64 after three quarters and scored the first 11 points of the fourth period to take command.  The Liberty has yet to outscore an opponent in the 2nd  half through five games this season, and has been outscored in four-straight games.

Nneka Ogwumike came alive for the Sparks in the second half with 22 points and seven rebounds. Los Angeles sustained the momentum, putting up an additional combined 68 points to round out their 90-point final score. This was the first road win for the Sparks. Candance Parker contributed with 20 points and 11 rebounds.

“Road wins are hard. But based on what we’ve been going through as a team, I think just winning tonight was important whether it was home or away. We’ve done a lot of soul-searching defensively, and I think that we really responded tonight,” said Ogwumike.

Turnovers Equal No Wins For The Liberty

When you turnover the ball 18 times like the Liberty did, you rarely are in a position to win. The defense was shredded and the bench, a former strength, was outscored 23-12.  The Sparks finished with 17 fast break points, compared to the Liberty’s five. New York got to the foul line 12 times and shot 50%, compared to the Sparks who drilled 23 of 27 attempts. Turnover set the tempo for the Spark’s second half dominance.

“Until we decide as a collective group, coaches and players, that we become mentally tougher and execute everything we’re supposed to every play, we’re going to struggle. That’s two games in a row with 11 points in the fourth quarter, and it’s hard to win basketball games like that,” said Liberty Head Coach Bill Laimbeer.

Is Tina Charles Doing Too Much?

The Liberty requires Tina Charles to not only do most of the scoring, and  create most of her own shots as well. Charles is a brilliant offensive mind, so she managed to do that in the first half, scoring 19 by midway through the second quarter. In the second half the Sparks made adjustments. They limited Charles to only 6 second half points. Charles ran in to foul trouble and the Liberty didn’t have enough options to turn to.

‘We need to trust each other out there and have each other’s back defensively,” Charles said. ”We know how to start games obviously, we did great in the first half. We just have to do it for 40 minutes, we can’t pick and choose.”

Epiphanny Prince, the WNBA Eastern Conference Player of the Week, continued her strong early season showing.  Prince finished with 21 points with five assists and four steals. This was Prince’s last game before she heads to play in the EuroBasket tournament next month.

Allen, joins a team in need of bodies at the point guard position. The 5-foot-8 point guard out of Notre Dame was selected by the Liberty with the second pick of the second round of last month’s WNBA Draft. Allen, who was a two-time All America and two-time first-team All-ACC selection during her college career, ranked second in the nation in assist-to-turnover ratio (3.59) and fourth in assists per game (7.6 apg).

Starter Brittany Boyd is out for the season with a torn left Achilles tendon, and Epiphanny Prince will represent Russia in the FIBA EuroBasket tournament next month. Prince is one of two players the Liberty will lose to EuroBasket, with forward Kia Vaughn playing for the Czech Republic. So you can see why the addition of Lindsay Allen was needed asap.

Up Next For The Liberty

The Liberty continue this Friday on the second game of this five-game home stand against the Dallas Wings at 7pm.