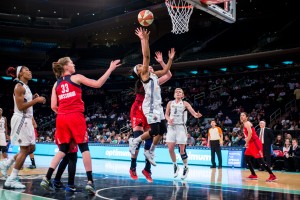 Re-evaluation is the word of the day as far as the New York Liberty is concerned.

Coming off their first home loss and with the specter of nine of their next twelve games on the road, New York had an opportunity to improve to 4-2. They got great play from two rookie starters up to this point and were playing at Madison Square Garden on “Pride Night” presented by Resorts World Casino. Nicole of Nina Sky DJ sets whipped a crowd of nearly 8,000 into sounding like a sellout.

But as soon as the whistle started play, it wasn’t there.

Maggie Lucas (23 points, 2 assists, 2 rebounds) torched the Liberty (3-3) for 14 in the opening act from the pine and New York, known for smart play from this edition, looked alarmingly like the Liberty teams from the previous two seasons. The score was accurate with Indiana (3-4), winners of two of their last three, leading 32-12.

“Our team knows that they have the freedom to take the open shots that they are getting in the flow of the offense.” explained Indiana Head Coach Stephanie White. “We cannot give up 30 points in a quarter and expect to come back and win.” Tanisha Wright added.

The quarter was longer than average due to a very tense atmosphere. A fight nearly broke out which was precipitated by Tanisha Wright’s block on a breakaway-layup attempt.

The Liberty were also very unlucky and with five offensive foul calls and were not getting the benefit of the whistle.

Technicals were being passed out like candy and Tina Charles, who suffered from a second straight poor scoring night, was called for a flagrant foul when she swung her elbows to remove harrassing defenders.

“Tina has to be more aggressive in the post when they come to attack her or double team her.” Liberty Head Coach Bill Laimbeer expounded.

It was going to be a long drive back but New York, spurred by Brittany Boyd and Swin Cash ignited a run with their quick hands and general effort winning the second quarter but still with a 15 point deficit. The Liberty had their moments in the third with Sugar Rodgers (11 points, 5 rebounds, 2 assists) hitting a three and driving into the paint and unleasing a desperate flinging hook shot to get them to 70-63. But timely three’s hurt the Liberty all night as the Fever, without Shavonte Zellous and Erlana Larkins, nailed 10 of 16 three’s in the first three quarters, especially one by Lucus which ended the third 66-55 in their favor. “For me it is always about defense and how we are able to put good effort in.” Swin Cash pointed out, “If we want to go up against any team then we have to execute.”

The New York Liberty continued to bang away with Tanisha Wright three giving her team lead with 12 for the night. Boyd, who had 11 with 5 assists and an incredible scoring bankshot of a driving collision. But the finale was more frustration as Marissa Coleman put the finishing touches to a 16 point, 6 rebound effort, and Layshia Clarendon buried New York with seven points and three assists off the bench. The bench tallied 44 points this evening for the Fever. “Overall I am proud of the toughness of our team.”  Stephanie White said, “When we started to lose our composure, we regrouped mentally.” “If this game was easy, we would’ve won.” Tanisha Wright responded, “I’m supposed to be able to take the game how they give it to me.”

The fact that Indiana would win by 17 points with Tamika Catchings held scoreless was quite a testament to their determination this evening. The Liberty 80-63 loss, if nothing else, will give this unit something to ponder as they attempt to right the ship on the road. “We started the game beyond poorly.” Laimbeer recalled, “We did at the start of the second quarter. By then it was kind of late in the game.”

The Liberty now go to Atlanta for a Sunday matchup followed by Tulsa on Friday before they return to the Garden June 28th against the Los Angeles Sparks.