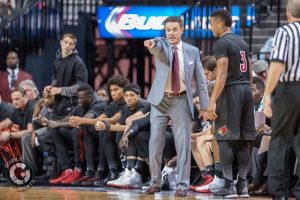 It is a subject that’s been hinted at over the past several months. Starting with a prostitution scandal that had taken place nearly five years ago on the campus of Louisville, small to moderate size punishments have been served to the Cardinals’ men’s basketball program. As of late, it seems the ultimate prize is up for grabs and coaches are taking bets on the consequences.
CBS sports polled Division I coaches in privacy as to what they think the future will hold for the University’s 2013 National Championship banner. Unfortunately for the Cardinals, 58% of college coaches seem confident in the banner coming down, and the wins negated.
My question is not whether this will happen. It’s whether the Louisville community deserves to have their National Championship vacated. Is it fair to punish all in consequence to a series of poor decisions made by a coaching staff and university alike?
Let us take a moment to think about who the actual victims are in this situation. First and foremost, the women who were involved on that heinous night. These women were likely pressured against their better judgement to take place in explicit activity in order to land an 18-year-old who may or may not help the school’s basketball team.
And how about the recruits who were involved? I would be lying to myself if I thought the 18-year-old recruits were completely against the idea of hanging out with prostitutes on their official school visit. But I would also bet that not all of them were completely for it, either. There had to be a few recruits that may have thought this was a bad idea, but due to peer pressure from an authority figure, went with the flow anyway.
Lastly, one cannot forget about the current players on the team. Especially ones that were not present during the night of the scandal. Ones that spent their lives eating, sleeping, and breathing basketball just for the chance to be on the court in a Cardinals uniform. No, we can’t forget about them, either.
These are the real victims. Victims of an incident created due to a lack of accountability from authority figures. They are the ones who allowed the event to take place. They are the ones being paid to lead the program. And, unfortunately, last time I checked, it neither the coaches nor authority figures who win championships. Its the current players and recruits who do. Therefore, if we are looking to punish those at fault, how could stripping a title from the players even an option?
I already disagreed with the punishment put on Louisville from two years ago. The verdict passed down made the team NCAA Tournament ineligible for an incident that didn’t involve those same kids. Not to mention the decision was announced midway through the season. This brutally punished two seniors who had led the top five team all year, and who had done nothing wrong.
So the question remains- How do you properly discipline a program for an act as stunning as this? It usually comes down to vacating wins and abolishing past accomplishments, as if it never happened. On paper this seems like a worthy punishment, because at the end of the day college sports are about winning games.
Yet, the only people really effected by this kind of discipline are the student athletes themselves. After all, the coaches will keep coaching, the administration will keep getting paid. However it is the kids, by vast majority, that will have their hard work erased as if the last 18 years of sacrifices meant nothing. It goes right along with the continued history of student athletes always getting the short end of the stick.
Given the nature of the crime, there is no doubt there must be punishment. My solution? Clear house. Now, this may sound aggressive. But if we’re talking about diminishing a National Championship that 12 kids sacrificed their blood, sweat, and tears to win, then what is so extreme about finding a completely new coaching staff? Maybe a new Athletic Director, for that matter.
A solution like this will never be entertained until we put student athletes on the same plane as coaches and authority figures alike. Until this happens, my previous statement will remain true:
The coaches will keep coaching, administrations will keep getting paid, and the “student athletes” will keep being stripped of their most valued accomplishments.
Post Views: 1,348
The following two tabs change content below.