The “flood” gates to New York are officially open.

Head coach Kyle Flood and Rutgers received a trio of commitments from the Empire State Friday. Grand Street Campus (Brooklyn, N.Y.) wide receivers Ahmed Bah and Taysir Mack both pledged to the Scarlet Knights on the field of High Point Solutions Stadium at the conclusion of the Knights Skills Camp. Earlier in the day, JUCO offensive tackle Malcolm Pridgeon of Nassau CC verballed to Rutgers.

Bah and Mack are the top two ranked wide outs of New York. Both ranked as 3-star prospects according to the 247Sports Composite, Mack compiled 45 catches for 900 yards and 15 touchdowns as a junior according to his 247Sports profile.

At 6-4, 190, Bah could eventually bulk up into a tight end, similar to former Knight Tim Wright with the New England Patriots.

The Knights are still chasing highly-regarded New Jersey wide receivers, Ahmir Mitchell, Brad Hawkins, and Kelvin Harmon. Even though Rutgers most likely won’t take more than four altogether, South Brunswick’s Mo Jabbie could move to corner where his highlight tape mostly has him playing, and Bah, again, if he grows and bulks up, could make the jump inside to tight end.

Pridgeon, a Long Island native, is a 6-foot-8, 303-pound offensive tackle. Ranked as the No. 4 JUCO offensive tackle in the nation, Rutgers beat out Pridgeon’s services over offers from Alabama, Nebraska, Ohio State, Baylor, Louisville, among others.

Pridgeon endured a rough childhood where his father died when he was 11, and his mother had a heart attack and stroke at the same time and was in a coma a couple years after Pridgeon revealed in an interview with MSGVarsity.com. He said his mom was doing better back in 2013 when the article was written.

Mack, Bah, and Pridgeon join linebacker Elias Reynolds from Poly Prep (Brooklyn, N.Y.) to commit this week for the Scarlet Knights. The three commitments bump up Rutgers’ recruiting ranking to No. 32 in the country and No. 7 in the Big Ten according to 247Sports. 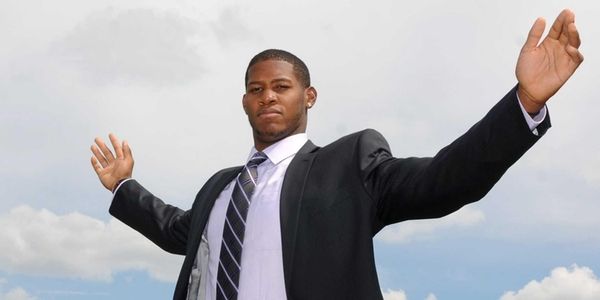