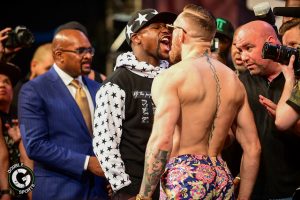 We are officially in fight week for Floyd Mayweather vs. Conor McGregor! Whether you are a fight fan or not, the events leading up to Saturday nights main event are sure to be entertaining. And honestly, in a time where headlines pop up daily making us all need a prescription for Xanax, it’s nice to be able to escape to a moment in combat sports history like this.

Okay, I can’t really believe I just said that. I was annoyed as anything when this fight was becoming serious. Now? I just had to join the ride. Also, I have a few bucks on it. (Hey, if you’re gonna dive in, go in the deep end right?)

Since the MayMac world tour last month, we had a much needed break from the repetitive speeches given and questions asked. Now all the hype and the speculations come to a head, and I’d say we’re ready to see what the outcome will be.

Oh, and just in case you have an extra $1,400 lying around, there are still plenty of tickets available on Ticketmaster.