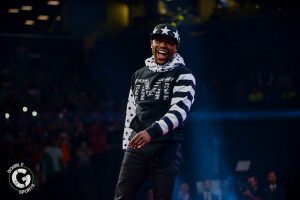 With a delay of almost 90 minutes, Day 3 of the #MacMayWorldTour took a turn that the crowd was not expecting.

Almost 13,000 fight fans were in attendance Thursday night at the Barclays Center in Brooklyn. A majority of them caring the Irish flag and singing the praises of the “Notorious One”, Conor McGregor. Not to be outdone, fitted hats and t-shirts with Floyd Mayweather Jr.’s famed logo, “TMT” embroidered across them had a strong showing as well. Little did the crowd know that Mayweather was about to take the hostile night with his entourage, The Money Team, by his side.

If there’s one thing New Yorkers are known for, it’s that we don’t put up with anything and we hate waiting. We also have zero problem expressing how we feel, even if it is to a handful of high-level executives. New York natives Swiss Beats and Doug E. Fresh came out to hype up the crowd during the delay but were not received well. Even with Beats’ attempt to call out rival producer Timberland. While the crowd was growing increasing restless, listening to each of the executives on stage including Showtime Executive Stephen Espinoza, Nets Sports & Entertainment President & CEO Brett Yormark and Mayweather Promotions CEO Leonard Ellerbe for the third day in a row was not going to happen. One by one, each Executive was booed off the stage. UFC President Dana White didn’t even attempt anything but handing the mic over to McGregor. Smart move. 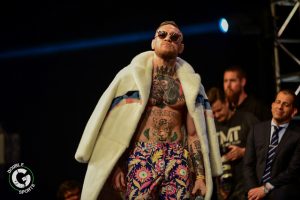 McGregor, donning a Polar Bear floor length jacket with no shirt and colorful fitted pants, was almost aggressive towards the crowd regarding his jacket. At one point the two-division UFC champion challenged anyone who had a problem with it, to do something about it. With the crowd visually on your side, it was almost confusing to have him express such aggression after seeing his reaction to the Toronto crowd just 24-hours earlier. He was appreciative and having fun with the crowd at the Toronto stop. Thursday night it was almost as if he knew this was going to be Mayweather’s night. 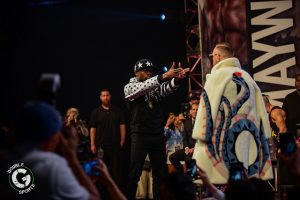 During McGregor’s time on the mic, Mayweather gave little-to-no attention to what we being said. He was conversing with his 17-year-old daughter Iyanna Mayweather, who was showing her father something on her phone. Whenever McGregor did walk over towards his future opponent, Mayweather would use the phone to take selfies and seemed to be videoing the interaction. From there McGregor went off the deep end. Beginning a series of comments, referring to certain ummm..racial stereotypes. Many of which Mayweather’s Money Team, seated in the floor seats in front of the stage, did not take to well. 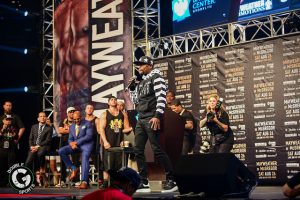 The moment Mayweather took the mic the tides changed. The Mayweather Money Team fans began to emerge and you saw a sense of home come over the undefeated champ. The Irish chants would pick up from time to time, but they were falling on deaf ears at this point. This was Floyd’s show and Conor had no chance of getting it back.

Throughout all of the hostility that filled the Barclays that night, Floyd made it clear that he does take his opponent seriously. He’s not in denial of the fight in front of him or the factors surrounding it. “I’m just thankful to be in this position. To be at this age and compete against young guys, it’s a blessing. He’s bigger, he has a longer reach and I’ve been inactive. Plus, we’ve never seen him lose standing up. He feels like he’s the best. I was the best when I was competing. So I think I had to come back for this last hurrah.”

McGregor, on the other hand, only sees this one way. The only way Mystic Mac knows.

“I have a very high fight IQ. I understand when to go and when not to. Only me and the opponent can see these details. I’m very confident whether it’s in a ring or an octagon,” McGregor explained in the post press conference interview. “The rounds are two minutes shorter than I’m used to and there’s a lot less action than I’m used to. He’s going to feel like he’s wrestling a bear when we tie up for the first time. He’s too small. I’m going to have my way with him.”

More photos from Thursday’s Press Conference can be found here.