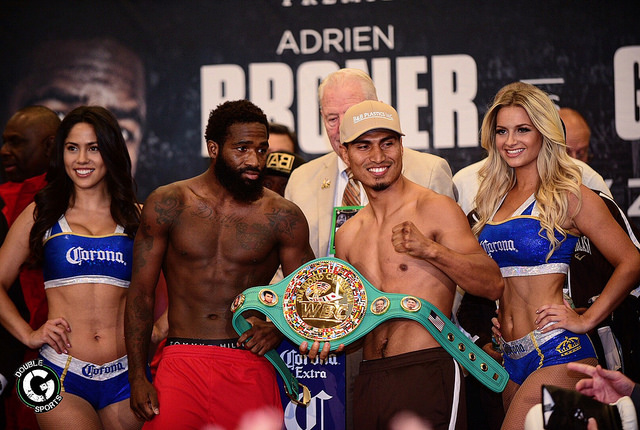 In the Showtime Championship Boxing main event Saturday night, Mikey Garcia dominated Adrien Broner in a unanimous decision win. The judges saw it 117-111, 116-112 and 116-112. Garcia, whom weighed in heavier than Broner, had his way with Broner all night long.

Garcia fought an absolute technical masterpiece, adapting to Broner’s ever move: He went inside, he fought from a distance, had perfect footwork, popped the jab. It was a boxing clinic. Broner came on strong in rounds nine and 10. To close the fight, Garcia took back the momentum with a big round 12, capping off an excellent performance.

“This is definitely one of my best performances ever,” Garcia said. “I think I controlled the fight in the early rounds, and I kept the activity up. [Broner] is a great fighter who has great skills. I was the superior fighter tonight.”

Post-fight, Broner gave credit where it was due to Garcia, but still patted himself on the back to Showtime’s Jim Gray.  “I want to congratulate Mikey and his team. At the end of the day I’m still AB, I’m still about billions, I’m still the “can man,” if he wants to rematch in California, we can do it.”

With the win, Garcia extends his record to 37-0. For the former three division world champion, Broner is not the best win on his resume, but he’s easily the “biggest” as despite his flaws, Broner remains a big name fighter who draws fan interest.

I’m giving credit were it’s due, Broner did step up and fought worthy competition. Broner faced Marcos Maidana, Shawn Porter, and Mikey Garcia and fallen against all three. We’re past the point now where we can say he’s developing – this is simply the level Adrien Broner fights at. That said, he remains a personality, so is unlikely to be going anywhere soon. After the fight, Broner reminded all of us about that.

Charlo knocked Heiland down in the 2nd and 4th rounds. The fight was stopped after Heiland was dropped in round 4. Heiland got back up from the knockdown, but his injured left leg prevented him from standing and he fell back into the ropes. The referee Benji Esteves then halted the fight at 2:13 of round 4.

With the win, Charlo is now the mandatory challenger to WBC middleweight champion Gennady “GGG” Golovkin. When Charlo will get the title shot against Golovkin is unclear, as he has a fight against Saul Canelo Alvarez on September 16 on HBO PPV.

“I want the belt next,” Charlie said. “I’m thankful to my team for getting me ready physically. I did it for my city and my family. I’m ready for the next level.”

UFC returning to New York on November 4th for UFC 217, Bisping v. GSP rumored for the event
Biggest AAU Game in History Happened this Past Week