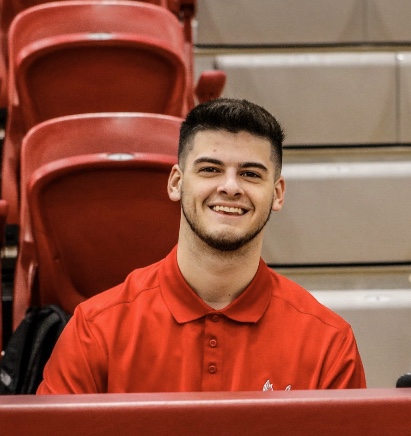 Born and raised in Wood-Ridge, New Jersey, Jack Barteck faced serious challenges early on in his life. Battling a life-threatening kidney problem, Barteck underwent numerous surgical procedures. Unable to remember the traumatic experiences, it was up to his parents’ David and Patrica Barteck to explain what he had been through.

“I can’t say enough with the support system I have with my parents and two older sisters. I would not be able to do the things I do or be the person I am without the four of them.”

Nevertheless, sports became a source of healing throughout his childhood and within the Barteck family.

Jack played Little League baseball while his two older sisters’ Camryn and Hailey participated in softball and basketball. Even with restrictions placed on contact sports, Barteck found success in basketball and baseball.

“When I was younger and starting out my high school career, all I knew is I needed to win and get a ring,” said Jack Barteck. “The year after I graduated [from high school] the basketball team won a state sectional championship, but the coaches and a bunch of players reached out to me.”

What Barteck’s former coaches said meant the world to him.

“We would not be there without you and everything you did for the program.”

Barteck doesn’t hesitate to praise all of his coaches for their impact. Mike Carcich, Jimmy Maher, and Ed Rendzio all played a role in his time playing for Wood-Ridge High School. Something they all had in common were there attentive coaching styles and caring attitudes for each player.

“Even though I did not get to win a state title I knew that I made an impact, and I could never repay everything I got from high school sports.”

Though Jack knows he is grateful to have played sports and positively impact his coaches and teammates, there were moments of frustration, especially surrounding his limitations from playing football. But, these moments never got the better of him.

“I couldn’t play major contact sports and was upsetting because I wanted to play football, but instead of looking at the glass half-empty and saying ‘I can’t believe this happened to me,’ you’ve got to take what you’re given and make the most out of it,” said Barteck.

That’s when he turned to getting involved in other ways. He brought a fan section to games during his junior and senior years of high school. Looking to further perfect his craft, Barteck got the opportunity to write about sports as well.

He connected with Cory Doviak of North Jersey Sports during his freshman year. After Barteck’s senior year basketball pictures were completed, Doviak asked Barteck about his post-graduation plans.

“He told me anything you need let me know, and if you want to write for me I would be more than happy to have you,” Barteck described. “From there I couldn’t turn him down. I brought him an idea and I got to write my first article that was published about a month later. The opportunity he gave me is something I cherish.”

Jack Barteck wrote his first first article on his best Michael Gianscaspro. Giancaspro was the quarterback for Wood Ridge’s football team and sadly tore his ACL in his final game of the season senior year.

But that didn’t stop him. He was able to overcome the injury and return to playing football.

“Working with him on that story was so much fun,” Barteck recalled. “Once I finished writing it I went around to every English teacher I had my whole life and asked the principal and my family to read it. “I probably wrote five drafts before sending it to Cory [Doviak]. He told me he was so impressed, and he actually still has a printout of the article hanging in his house. I still go back and read that piece and be happy with the way it turned out.”

Doviak’s question about Barteck’s college plans still lingered on his mind. Eventually, he decided to attend Montclair State University, where Barteck immediately displayed the initiative to be involved in the radio station. Before graduating from Wood-Ridge High School, he reached out to the sports director of the Red Hawks radio station, WMSC 90.3 FM.

Then, on the first day of his freshman year at Montclair State, Barteck received an e-mail from the sports director who scheduled a meeting immediately.

“When I met with the sports director he said we have a football game on Saturday and need people to work in studio,” said Barteck. “I said I was available, got in there, and within two weeks I was doing color commentary for a football game for homecoming.”

From there, Barteck grew his experiences with being a color commentator for basketball games. By the end of his sophomore year, he earned the role of Assistant Sports Director for the radio station.

In addition to his broadcasting duties, Barteck hosts his own radio show “Hot Take Sports”. The multitasking does not stop there, as Barteck is majoring in Television and Digital Media with a concentration in Sports Media.

This past January, Barteck got the opportunity to transition to the TV side of broadcasting. He joined the “Red Hawk Sports Network” that was streamed on YouTube. Additionally, he ended up calling every single men and women’s basketball games for both the radio station and Red Hawks Sports Network once he returned from winter break.

“When I was kid growing I would be hearing sports talk radio with guys giving their opinions,” Jack Barteck remarked. “You don’t think about everything that goes into it… all the research that goes into it. The way I watch sports is totally different now. I love it because I take in all this information internally and come up with the way I want to spin it on my show.”

One of the best parts of working on sports talk radio for Barteck is how he can connect with his friends, colleagues, and the teams he’s covering. It’s all one big learning experience for him, and Barteck even had the opportunity to call a women’s NCAA tournament game in Virginia.

The key for Barteck is the preparation. When it comes to research, Barteck is very particular by jotting down notes including player stats and bios. He gathers team notes, including the recent schedule and five-year results and the coaching staff. One of the most significant aspects of research is attending practices to view drills and speak with the coaches.

“The biggest part of broadcasting is being able to pull back the curtains and show the fans what they don’t know and what’s going on the court,” Barteck said. “Seventy-five percent of the information you will never use during a broadcast but having it all makes everything so much better. Plus, working with the person who is doing color commentary and having that communication is super important.”

Backed by a dependable sports information department, led by Michael Scala and his assistant Pat Duffy, makes Barteck’s job even smoother by the time tip-off occurs.

“They have all the data, bios, and a bunch of articles,” Jack Barteck explained. Without them there is no way that our broadcast goes on. We get the interviews and the team and players are great.”

One of these interviews was a sit-down with football coach Rick Giancola. Barteck also had the opportunity to work with Women’s Basketball Head Coach Karin Harvey.

“She was incredible. The information given to us enhanced our broadcasts. Just being able to work on projects with them and just to get to know them better is incredible.”

When not working with coaches and players, Barteck’s professors play a key role in helping him perfect his craft, too.

With an extended break due to the COVID-19 pandemic, Barteck managed to get back into the broadcast booth with help from Dr. Keith Strudler who had a connection with Eleven Sports. An opportunity to broadcast games for the American 7s Football League (A7FL) something Barteck could not pass up.

“It was incredible to have Dr. Strudler think of me as the first option out of so many kids and made me feel good.”

Despite some hiccups in Week 1 of the broadcast, Barteck described the effectiveness of working with color commentator LJ Smith, a former A7FL player involved heavily in the success of the league and familiarity of the players.

“He was great and so easy to work with,” Jack Barteck said. “From the second we met each other we had chemistry and translated over to the broadcast. Even the people who hired us said it’s like we were doing it for years.”

After calling the A7FL Championship Game on August 16th, Barteck will prepare for his junior year at Montclair State, as well as first full semester as the Sports Director of WMSC 90.3 FM

“First of all it’s awesome to have a school that really cares about us and create these opportunities for us,” said Jack Barteck. “Having this new technology really helps boost up our broadcast and make it more legit every day. I feel that I sound like a broken record that every person is helpful and not selfish. It starts all the way from top to bottom and Athletic Director Rob Chesney has done a great job. It creates an environment that makes my job and work so much easier.”

For Jack, life has come full circle. Even though contact sports were limited, he’s able to experience the same passion and emotions in covering those sports.

“Out of all the memories some of the best ones were on the field or court somewhere. I got to live a healthy life and following my dreams is a miracle. It really has shaped me the person I’m today because I don’t take anything for granted.”