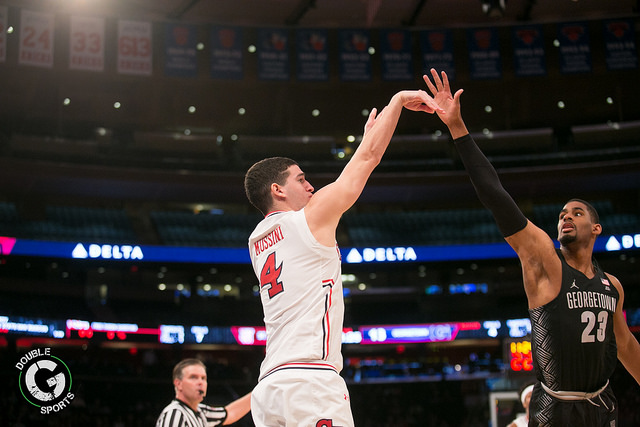 The 2016-17 season for the St. John’s Red Storm was one of promise. A 14-19 record and a 7-11 record in the Big East does not scream NCAA Tournament bid, but consider this. St. John’s had nine underclassmen on their roster who played major minutes last season. Also, they won only eight games in Chris Mullin’s first year as head coach. The 2016-2017 Red Storm seemed to have started their upward climb back to basketball relevance.

The climb back to national relevance lost a player on Tuesday as Federico Mussini announced that he would be leaving St. John’s to pursue a professional basketball career in Europe and will not return to the Red Storm next season.

“It was an honor to wear a St. John’s jersey for the last two years,” said Mussini. “This was an incredible experience for me to be a part of such a great university in New York City. I want to thank Coach Mullin and the entire coaching staff for everything I learned from them. I also want to thank all the St. John’s fans for their support at Carnesecca Arena and Madison Square Garden.”

“I believe I am ready to take the next step in my career and play professionally back in Europe,” Mussini added. “I will never forget this experience and I am sure that my teammates will have very successful seasons ahead. I will always support them and the St. John’s basketball program.”

Mussini was a calming force in the St. John’s lineup as he played in 62 games for the Red Storm over two seasons, starting in 25 of those games. While it would seem that a bench player would not have a major impact on a team, Mussini often played during crucial minutes down the stretch and was a key figure in many wins for the young team.

The problem now becomes who replaces Mussini and his 9.5 points, 112 three-pointers and 86 percent foul shooting that he accumulated during his career in Queens. The hope is that University of Arizona transfer guard Justin Simon, who sat out the 2016-17 season, will be able to replace Mussini’s numbers and hopefully add more. Other names who will be looked upon to step up with be guards Brandon Lawrence and Malik Ellison.

“We are supportive of Federico’s decision and wish him the best of luck,” said St. John’s head basketball coach Chris Mullin. “It was a pleasure to coach Federico for the last two years. He represented our program well both on and off the court. Federico is a terrific person and a model teammate with a bright future ahead.”