NCAA Hockey Back at Madison Square Garden this Winter 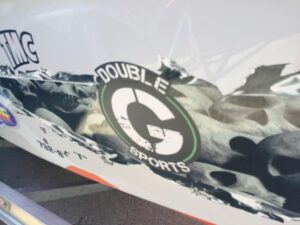 Harvard and Yale have the longest rivalry in all of college football and for the past two years, it has spilled over onto the ice at Madison Square Garden.

“The Game” as it was billed, brought fans from all over the country, as well as dignitaries and hockey legends.

The first edition of “The Game” took place in January of 2014 and saw the Garden Store turn into the Yale/Harvard Store; as Ranger and Knick items took a back seat to those of the two teams playing hockey.  Tshirts, Sweatshirts and Hoodies in gray for Yale and red for Harvard adorned the store. There were also pucks bearing both school logos and an official Program commemorating the event.

I was I attendance that Saturday evening and the crowd of 15,524 were treated to not only a good game (defending National Champions Yale won) but were treated to a ceremonial puck drop that had three Rangers and a Cabinet Official.

Mike Richter, Mark Messier, Dominic Moore and Secretary of State John Kerry all walked out onto the ice and posed for pictures with the Captains of both teams. I thought that there was extra security at MSG that night, and I was correct. Secret Service Agents were around and the fans were scanned before entering.

The Game was replayed in January of 2015, and 12,774 were in attendance as Yale once again defeated their arch-rival. I was once again in the crowd, but the Secretary of State was not. There were two members of the United States Women’s Hockey team there instead, as they brought the crowd to its feet in applause.

This year however, Yale was unable to accommodate the game and Quinnipiac jumped at the chance to play at the “World’s Most Famous Arena” on January 9th, 2016 and it will be part of a very rare “Triple-header” of hockey at MSG.

The Rangers and Caps will battle it out at 1:00PM and then Harvard and Quinnipiac will do battle at 7:00PM. In between, Army and Navy will play an exhibition game which ought to thrill the crowd, knowing that these young men have devoted themselves to not only hockey, but their country’s freedom.

Besides Yale and Harvard playing at the Garden, Cornel University has also played there the past two seasons, on the Saturday after Thanksgiving. This year will be no different except that their opponent will be the Terriers of Boston University, who are coming off a Frozen Four season. This game will be played on Saturday November 28th, 2015.

The Big Ten Hockey Conference has also slated a game to be played on January 30th, 2016, where Penn State and Michigan will do battle on the ice. And that is not all, as Boston College and North Dakota have agreed to play in December of 2016 at the Garden.

Add that to the Connecticut-Notre Dame game scheduled for November 1st of this year at the Barclay Center in Brooklyn (home of the NY Islanders) and College Hockey is becoming a big deal in and around NYC.

Look for my recaps of these great games this winter!

Stepan, Rangers Agree on New Six Year Contract
Drury, Schneider, Ruggerio, and DeGregorio to be Elected Into US Hockey Hall of Fame