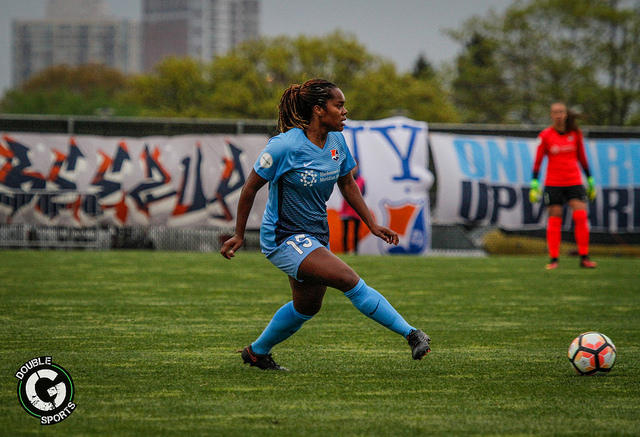 Three goals was not enough as Sky Blue FC falls to the Washington Spirit.  Early lapses created a hole too large to overcome in 90+ minutes on Saturday.  Here are still some areas head coach Christy Holly and his team will need to refine for the upcoming home and home stretch with the Houston Dash.

The Washington Spirit scored three goals in the first half on Saturday’s contest.  Francisca Ordega was particularly troublesome for Sky Blue, as she earned a brace and an assist for her side en route to their first win of the season.

The speed and overall skill of Ordega cannot be overstated. However, the shape of the defensive line is something Sky Blue should work on.  In his tenure, Holly has looked to engage his back line in the attack. With Christie Pearce out with a concussion, and Kelley O’Hara playing up top, the personnel is a lot different than last season.  For one, Pearce and O’Hara both offer speed to the back line that has not been replicated as of yet this season – not to mention years of international experience.

With Sky Blue pushing the back line up, defenders must stay disciplined.  Through balls left New Jersey scrambling. The defense must ensure they can either stay tight to get an offside call, or be capable of getting back to defend. It also didn’t help that two of Washington’s goals were defensive errors: and own goal by Erin Simon and a poor clearance by Kailen Sheridan.  Either way, focusing on a tight, quick and smart back line will be key moving forward.

Sky Blue showed they are more than capable of scoring multiple goals, something Double G Sports noted would be a key for New Jersey’s success. Sam Kerr continues to do Sam Kerr things. She ripped six shot against the Spirit, improving to 11 shots on the season. Kelley O’Hara (1 goal, 1 assist) and Sarah Killion (2 goals) fueled the offense for New Jersey.  Again, McKenzie Meehan was a huge contributor off the bench.  Meehan drew a foul in the box which eventually earned Killion her second goal and brought Sky Blue within one goal.

To capitalize on the scoring capability of the team, Sky Blue must have patience.  New Jersey is second in the league for offside calls (12).  While this may indicate a lack of patience for forwards, it may also indicate a timing issue from the midfield.  After Saturday, Sky Blue has posted five goals, but only two assists.

New Jersey has made 401 passes, and posted a 71% passing accuracy.  However, many of the passes are short, quick passes that seldom open up the field.  Using the length and width of the field more effectively should enable the offense to make more effective passes closer to the goal frame.  Additionally, when Sky Blue does connect, they need to send more options forward to put away crosses or rebounds.

Sky Blue showed they can come from behind and put a lot of pressure of keepers in the latter part of Saturday’s game.  The team has also shown – in Seattle in particular – that they can start a game with a strong attack. Now, New Jersey needs to put together a complete game.  It is never too early in the season to identify a team rhythm and culture.  Right now, Sky Blue FC lack a consistent style and/or execution of their game plan. The good news is, the team has all the pieces.  With early injuries and other commitments, we have yet to see the team firing on all cylinders.  Additionally, I am not confident the depth of the team has been fully investigated.  Meehan and Madison Tiernan have done well with their chances, and Nikki Stanton is another player who can contribute.

As Sky Blue heads to Houston to take on the Dash, it will be interesting to see what buttons Holly will push to get a needed result on the road.  The Dash is a team that has the skill to score multiple goals, but they haven’t figured out their back line either.  The two teams will square off on Saturday at 4:00 ET on Lifetime.