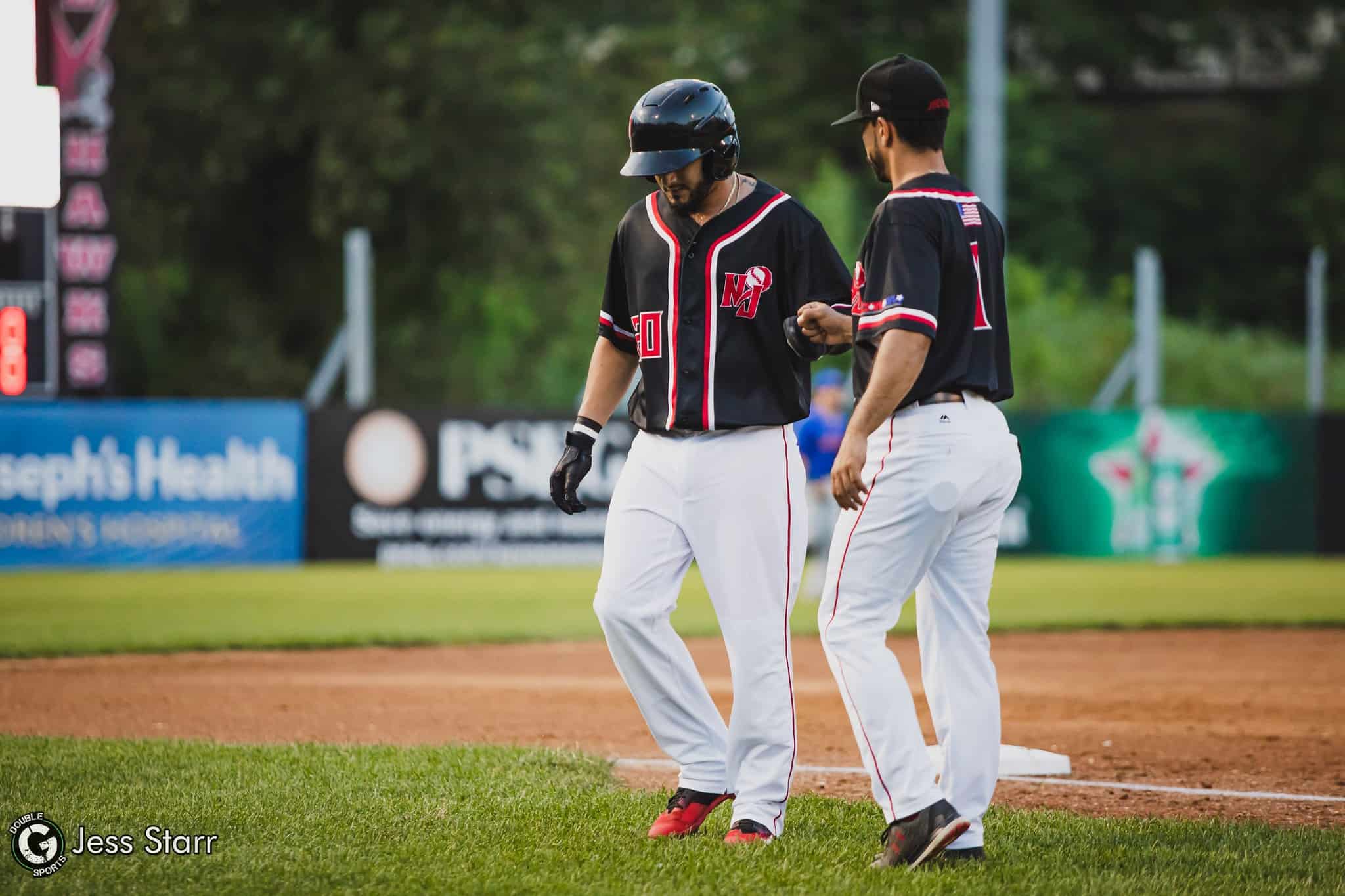 The New Jersey Jackals defeated the Trois-Rivières Aigles three games to two in the Can-Am League Semifinal playoffs, clinching a spot in the championship series against the Sussex County Miners.

A big help in the Jackals winning the series was capturing the momentum early. That’s exactly what they did in game 1 at home on Sept. 4. The Jackals got on the board early when Richard Stock lead off the bottom of the second lining one into left-center field and hustling out a triple. Nelson Ward then drove Stock in with a one run single. Richard Stock dealt the big blow of the game two innings later in the bottom of the fourth, crushing a ball to deep left field for a two run home run, giving the Jackals a 3-0 lead.

“It’s just another game, maybe a little more energy,” said Richard Stock. “Kept it pretty loose. Had a nice off day yesterday so we were all ready to go.”

Starting pitcher Brendan Butler was dominant on the mound, pitching seven shutout innings allowing just three hits and two base on balls with eight strikeouts. It was Butler’s eighth straight start allowing three earned runs or less. Behind Butler’s dominance on the mound and Stock’s dominance in the batters box, New Jersey rolled on to a 3-0 victory to take a 1-0 series lead.

“I just kind of kept it as any other game,” said Brendan Butler. “I just didn’t wanna hype it up too much. Wanted to go out there. I’m pretty laid back so I just tried to stay focused and I just try to go one pitch at a time.”

The Jackals would not have the same fortunes in game two at home on Sept. 4 that they had in game one. In game 2, the Aigles scored one run in the top of the third, two in the top of the fifth, and two in the top of the seventh. Jackals starting pitcher Eduard Reyes had a rough game, pitching six 1/3 innings allowing five earned runs, his third straight start allowing four earned runs or more. Alberth Martinez had a great game at the plate for Trois-Rivières, going 3-for-4 with two RBI. New Jersey ended up dropping game two by a final score of 5-0 as the Aigles tied the series one game apiece.

After hosting the first two games at home, the Jackals went on the road to Trois-Rivières for the final three games. New Jersey got game 3 on Sept. 6 off to a good start in the top of the first. Conrad Gregor singled to score Demetrius Moorer to get the Jackals on the board first. New Jersey would add four more runs in the top of the fourth with two coming off a single from David Harris, who went 2-for-5 with two RBI. New Jersey also got great starting pitching from Justin Brantley, who pitched six shutout innings and 10 strikeouts. The Jackals rolled on to a 7-2 win to take a 2-1 series lead.

New Jersey would have a chance to win the series and clinch a spot in the championship in game 4 on Sept. 7. However, the Trois-Rivières would show why they’re the team that finished the regular season with the second best record in the Can-Am League. Taylor Brennan got it started with a grand slam home run in the bottom of the first, getting the Aigles off to a 4-0 lead. Both teams added two more runs in the third inning before Trois-Rivières added four more in bottom of the fourth and five more in the bottom of the sixth. The Aigles would go on to rout the Jackals by a final score of 17-4. This tied the series 2-2 which meant a do or die, winner take all game 5.

Game 5 on Sept. 8 had both teams going back and forth. Trois-Rivières got on the board first, scoring two runs in the bottom of the fourth. The very next inning, New Jersey tied the score on one swing as Isaac Wenrich hit a two run single in the top of the fifth. However, the Aigles took the lead back after David Glaude scored on a wild pitch, giving his team the 3-2 lead.

Down 3-2, the Jackals would do what they’ve done so many times throughout the regular season. Mound a comeback using their two biggest strengths, their bullpen and lineup. David Harris hit a one run single to tie the game in the top of the sixth. Following that, relief pitcher Reece Karalus came in and pitched four straight scoreless innings, striking out nine in the process. This sent the last game of the series into extra innings with the score tied 3-3.

In the top of the tenth, New Jersey took the lead for good. Alfredo Marte reached first on an E-5 allowing Demetrius Moorer to score and for the Jackals to take the lead. In the bottom of the tenth, closer Dylan Brammer came in and got the three out save, giving the Jackals the 4-3 win and the series.

Following their victory in the semifinals, New Jersey Jackals will face the one seed Sussex County Miners in the Can-Am League Finals. The defending-champion Miners once again finished with the league’s best record at 61-33. Sussex County advanced to the championship following a 3-1 series victory over the Rockland Boulders in the semifinals. Will you place a bet on New Jersey?