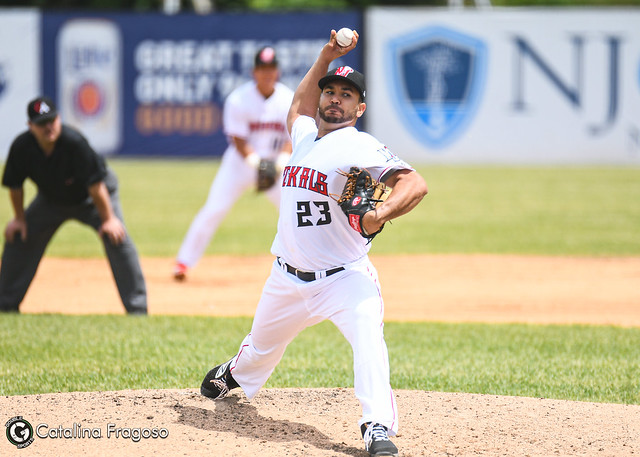 In the latest episode of the battle of New Jersey, the New Jersey Jackals split a two-game series with the Sussex County Miners while falling victim to a no-hitter pitched by Frank Duncan.

Yogi Berra Stadium would play host to the latest edition of the battle of New Jersey; a two game series between the New Jersey Jackals and Sussex County Miners. The Jackals would end up splitting the series with the defending Can-Am League champions one game apiece, winning the first in what was mostly a blowout. However, New Jersey would not only lose the following game the next day, but would end up being no-hit in the contest as well.

To say New Jersey came out swinging in the first game on June 12 would be a massive understatement. In the first two innings alone, they scored eight total runs. Five of those came in the first inning. Alfredo Marte got it started with a single to drive in Santiago Chirino for the Jackals first run. In the very next at bat, Richard Stock would draw a walk to give his team bases loaded with no outs. And the Jackals would end up capitalizing on the early opportunity. Emilio Guerrero hit a single up the middle to score two runs, while Jason Agresti hit a line drive that was ruled fair down the left field line for a two run double. New Jersey would end up scoring three more runs in the second inning off two errors by the Miners infield.

Jackals starting pitcher Eduard Reyes was excellent once again on the mound. He pitched six innings, allowing just two earned runs and striking out eight. His highlight of the game came in the sixth inning, where he struck out DK Carey to get out of a bases loaded jam. Reyes currently stands with a 1.80 ERA, 3-0 record, 30.0 innings pitched, and 32 strikeouts on the season, the best among Jackals starters in all three categories.

“I mean he’s just in the zone,” Jackals catcher Jason Agresti said on catching Reyes throughout the season. “Just pounds the zone with every pitch and when you’re on the opposing side of that, it’s not a good time. I love catching him. He’s been great to work with and I hope he keeps it rolling.”

Jason Agresti would also have a big day at the plate, going 2-for-3 with three RBIs, including a solo home run, his first as a Jackal, in the bottom of the seventh to cap the Jackals lead at 10-2. Sussex County would end up trying to mount a comeback in the ninth inning, scoring five runs to cut the Jackals lead to 10-7. However, that’s as close as the Miners would come to completing the comeback, as Reece Karalus came in out of the bullpen to get the final two outs and secure the Jackals victory.

“I was definitely feeling good,” Agresti said on his day at the plate. “I try to focus on one at-bat at a time, one pitch at a time. And I was able to get two pitches that I could do something with and do some damage.”

The second game on June 13 was, in a nutshell, a pitcher’s duel. The Jackals would send Matt Vogel to the mound to do battle with Frank Duncan of the Miners. Vogel would have an excellent night in his own regard, pitching seven innings of shutout baseball while striking out eight. Despite the scoreless game, Jackals manager Brooks Carey took him out in the eighth inning, as Vogel was dealing with a sore hamstring. Kiyohito Uchida took the mound in the top of the eighth to make his debut with the New Jersey Jackals.

Unfortunately, Uchida’s first outing with the Jackals was one he’d like to have back. He allowed back to back walks to bring Jarred Mederos to the plate. Mederos laid down a bunt that Uchida would run to get, but ended up overthrowing it past Jackals first baseman Conrad Gregor, allowing two runs to score on the play. The Miners would end up scoring another run on a ground out to make the score 3-0.

“Of all the times I’ve seen him throw over the winter, he was never as wild as he was today,” said manager Brooks Carey on Uchida’s struggles. “It could’ve been some nerves. But we were short in the bullpen with our top guys. So we’ve got to find out who can pitch and who can’t pitch.”

Frank Duncan would come out to pitch the bottom of the ninth inning with the opportunity to no-hit the Jackals. He would end up doing just that, retiring the Jackals in order to complete the complete game no-hitter. Duncan’s no-hitter is the ninth in Can-Am League history, and the first since Eduard Lopez did it for the Jackals on August 7, 2018.

“Every at-bat you just try to get a base hit and get something going in an inning and we just couldn’t get anything going in an inning,” said Carey. “We had a couple of chances on some infield balls. They made two great plays. I think to save the no-hitter the dive at third base; maybe that gets through. He hangs a breaking ball and we hit a two-run homer. You never know. They’re a whole lot of reasons why we lost, but the biggest reason was that guy (Frank Duncan) threw the ball really good.”