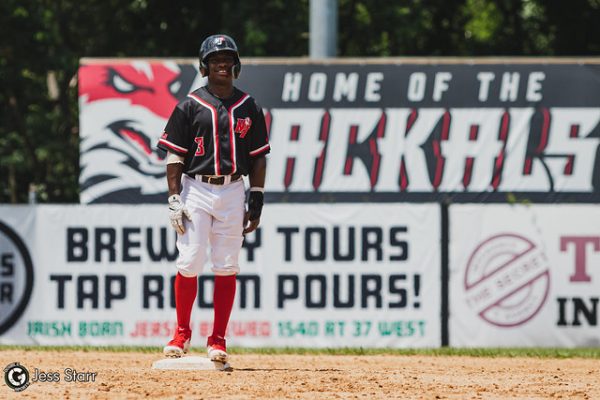 In a tight race for second place in the Can-Am League standings, the New Jersey Jackals took two out of three games against the Trois-Rivières Aigles at home.

Throughout the 2019 season of Can-Am League baseball, the New Jersey Jackals and Trois-Rivières Aigles have been in a dogfight for second place in the standings. The Jackals held second place in the beginning after they swept a four game series against the Aigles in their first home series of the season. However, the Aigles have held strong a lead since sweeping the Jackals in a three game series on their home turf. Now, New Jersey came into a three game home series 3.5 games back of Trois-Rivières for second place.

The first game on July 19 began with the Aigles taking a lead over the Jackals. Parker Sniatynski hit a one run single in the top of the second to give his team the 1-0 lead. However, the Jackals bats would explode for five runs in the bottom of the fourth. One run scored on a single by Sthervin Matos. After Matos attempted to take second, Aigles catcher Joe Deluca overthrew the ball into the outfield. Two runs scored on the error. Last but not least, Santiago Chirino continued his clutch hitting with a two run double. Starting pitcher Brendan Butler was excellent on the mound as well. He pitched 7 innings allowing two runs and striking out 10. All of the above was a perfect recipe for a Jackals 7-1 victory.

Above all, this game marked the return of Jackals third baseman Emilio Guerrero. Guerrero played his first game since July 2, missing ten games due to injury since that time. In his first game back, Guerrero went 2-for-4 at the plate, including a double in the bottom of the fifth.

“It’s amazing. Just to be with the guys, play hard, that’s all I want,” Emilio Guerrero said on getting back onto the field. When describing his day at the plate in his first game back, he said “I was just trying to be on time, see the ball. Try to put it in play. I didn’t try to do too much.”

Unfortunately for the Jackals, the second game on July 20 would not bear similar results as the first. The Aigles would score six total runs in the fourth, fifth, and sixth innings of the game combined. Jackals starting pitcher Eduard Reyes struggled, allowing five runs in 5 innings pitched. After allowing no more than two runs per start in his first six starts, Reyes has now allowed five runs or more in three of his last five starts.

In the bottom of the sixth inning, New Jersey would start a comeback to try and get back into the game. Conrad Gregor started the rally with a leadoff solo home run. Gregor’s sixth home run of the season got the Jackals on the board. Later on in the same inning, Chase Smartt hit a ground ball and was called out on a close play at first base. Jackals manager Brooks Carey came out to argue the call and was thrown out of the game in the process. Alfredo Marte scored on the play to give New Jersey another run. Riding their momentum, the Jackals added two more runs in the bottom of the seventh off a two run double by Alfredo Marte. All of a sudden, the Jackals now trailed the Aigles 6-4.

Despite their valiant efforts, New Jersey’s comeback would fall short. Trois-Rivières scored three more runs in the top of the eighth inning to put the game out of reach. David Glaude drove in two with a double as the Aigles would go on to win the game 9-4.

However, the most devastating blow New Jersey received this game was on the injury front. After just returning from injury the game prior, Emilio Guerrero was injured again in his second at bat of the game. On the second pitch of the at bat, a foul ball hit Guerrero in the leg. He went down afterward and appeared to be in pain for a bit before his teammates helped him off the field and into the locker room. On July 21, the Jackals placed Emilio Guerrero on the inactive list.

Both teams came into the third and final game on July 21 with a win apice. The Jackals needed to win this game to gain a game on the Aigles in the standings. New Jersey would not get off to a hot start, however, as Trois-Rivières scored three runs in the top of the first inning. Down 3-0 to start the game; New Jersey was in danger of dropping a game in the standings to Trois-Rivières.

However, the New Jersey Jackals once again, like they’ve done several times this season, began mounting a comeback. In the bottom of the first inning, the Jackals scored four runs in total to take the lead. Two of the runs they scored were on errors. The Aigles would go on to commit six total errors as a team in the game. New Jersey would also add two more runs in the second and third innings off wild pitches, taking advantage of the sloppy defense. Ultimately, the Jackals would put the game away in the bottom of the fifth inning, scoring six total runs and rolling onto a 12-4 victory to win the series.

“We never quit,” said Demetrius Moorer. “First inning, second inning, seventh inning, ninth inning. We never quit. Wether we’re up 10 or down 10. We’re gonna keep our foot down on the pedal and try to score as many runs as we can.”

Speaking of, this game would also be the game where New Jersey Jackals outfielder Demetrius Moorer also returned from injury. On June 30 against Cuba, Moorer got hurt after crashing into the right field wall while chasing down a fly ball. He had missed 16 games since then before returning. In his return, Moore went 1-for-3 with two runs scored and two RBIs.

“Honestly it felt great,” said Demetrius Moorer. “I did everything the trainers and doctors wanted me to do. I’ve been feeling good. We’ve been doing a lot of testing as far as making sure I’m good condition wise and that everything in my head is good. It felt really great to be back out there.”

With this series victory the New Jersey Jackals would gain a game on the Trois-Rivières Aigles in the standing. The Jackals would improve their record to 30-25, still third place in the Can-Am League. New Jersey would go on to play back to back doubleheaders against the Sussex County Miners. The first doubleheader began at home on July 24 with the resumption of a game that was suspended on July 17 due to inclement weather, followed up with a seven inning contest. The second doubleheader was on the road in Sussex County, with back to back seven inning games.