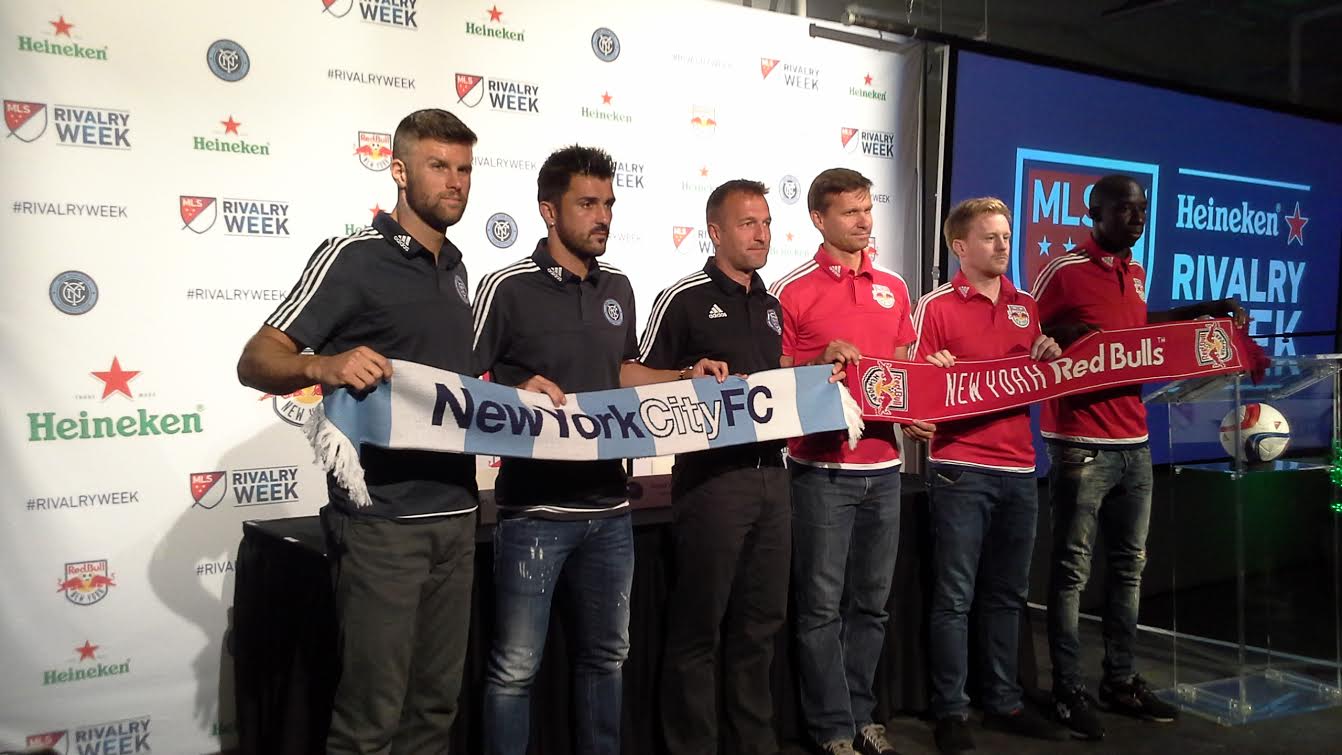 New York Derby: Are you Red or Blue? 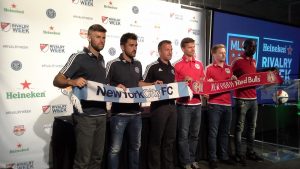 The Heineken House was the site of a dual press conference with representatives of the two  New York  MLS sides: The New York Red Bulls and the New York City Football Club fans were in force.

Their respective fan clubs, The Empire Supporters Club (Red Bulls) and The Third Rail (NYCFC) even had their own tables in full view.

This is one of a few games MLS has set up this week with teams in close proximity to each other and billed as “Rivalry Week.” This Sunday the NYCFC will host the New York Red Bulls in a rematch. “This is a pressure business, if your not used to pressure, then you shouldn’t play professional sports.” Red Bull Head Coach Jesse Marsch proclaimed.

The Red Bulls had Forward Bradley Wright-Phillips, who scored both goals against NYC in their initial encounter at Red Bull Park, midfielder Dax McCarty, in addition to Marsch. The Red Bulls are back to even, snapping a three game losing streak. Max McCarty had a wide perspective on the rivalry. “I have played in alot of big games and they are all special for different reasons.” McCarty shared, “For this one, we now want to force something that’s not there. But the way the first game played was organic. It was truly eye opening to me to see how much it means to this city and each fanbase.”

The NYCFC had their Head Coach, Jason Kreis, with Chris Wingert, and Captain David Villa in the house. The NYC team is on a three game winning streak themselves. Wingert had this take on the match. “Rivalries are created in different ways, geographically, which is the case here.” Wingert explained, “The best rivalries are developed over time.”

An interesting historical side note is that it has been twenty years since the birth of MLS and two men, Jason Kreis and Jessie Marsch, currently head coaches, were on the original rosters in year one. Jason, who compared the ease of motivating his team for games like this instead of having to convince them, equating it to “selling ice to Eskimos.” is happy with his place in history. “I’m proud to have been a player in 1996, Jesse as well.” Kreis recalled, “I committed a great deal of my life, sweat, blood, and tears to this league.”

The rivalry which was hoped for was ignited as much by the fans as anything else. But after the first meeting, it was obvious that NYC was treated as the wedding crasher. Now with the rematch at Yankee Stadium, soccer has grabbed the notice of a city starved for good sports entertainment. Captain David Villa, for one, is looking at the bottom line, having played many of these type of derbys. “Ultimately we want our fans to be proud to be NYCFC” Villa said, “It’s clear if we have a good game we will get these three points.”

Heineken has been involved in soccer at this level for the entire duration of MLS History. Max McCarty understands the implications and importance of such a rivalry. “It’ s huge. We are the established team in New York and New Jersey. NYCFC came on and made a big splash.” McCarty reflected, “It’s important to have big teams come in and make a difference. NYCFC have a few big name players and they bring recognition and legitimacy to the league. But we still want to win.” David Villa agrees that this is another step in the growth to be a top level entity. “I think this league (MLS) will be one of the best in the world.” Villa added, “It’s young compared to others, but they are doing a great job.”