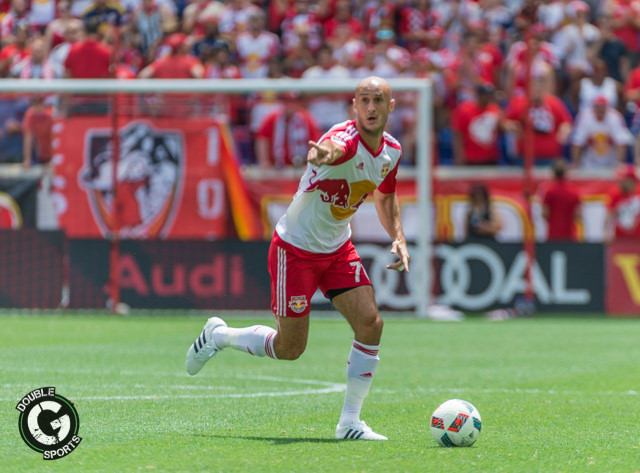 A week and a half before the other Major League Soccer teams get underway, the New York Red Bulls hosted the Vancouver Whitecaps for the first leg of their CONCACAF Champions League quarterfinal. The earlier start did what the coaches thought it would, show the teams’ lack of preparation. The two teams battled in 90 minutes of sloppy and chippy play, and ended on even terms, with a goal for each team.

The Red Bulls lined up in a two-forward system, which looks to be the team’s go-to formation this year. Bradley Wright-Phillips was partnered with Gonzalo Verón, while Daniel Royer and Sacha Kljestan took up spots on the wings. Aaron Long, after signing an MLS contract, took the center back spot next to Aurélien Collin, while Justin Bilyeu took the left back spot left open by the suspended Kemar Lawrence.

The early moments of the match were dominated by the home team, with Wright-Phillips and Kljestan connecting in the fifth minute resulting in Kljestan sending the ball wide of goal. The Red Bulls earned several freekicks, all of which flirted with the goal, but managed not to threaten Vancouver goalkeeper David Ousted.

It was the Whitecaps, though, who took the lead off a corner in the 39th minute. Kekuta Manneh was left alone in the area, and once the ball found his head, Manneh was easily able to place the ball on the side of the goal past Luis Robles. The half ended that way, with Vancouver controlling the remaining minutes.

The Red Bulls responded quickly in the second half, with an attack that led to a penalty in the 46th minute. Rookie Jake Nerwinski took Royer down in the box, and Kljestan lined up to take it. Ousted saved the penalty, as he did twice over two years ago at Red Bull Arena, when Wright-Phillips had two penalties saved by Ousted.

Eventually, though, the Red Bulls would have their equalizer. In the 62nd minute, a Sal Zizzo cross found Verón before landing at the feet of Wright-Phillips, who scored from close range.

Eight minutes later, Vancouver was down to 10, as Zizzo was sent to the ground following a Cristian Techera high kick, just one of the many fouls committed at Red Bull Arena. The referee did not hesitate, and Techera was sent off, and will miss the second leg next week.

The remaining 20 minutes played itself out as the rest of the match, with opportunities and fouls appearing for both teams. The closing minutes of the match featured a Red Bulls attack that almost resulted in a winning goal, but a Derrick Etienne shot went wide of goal.

The match ended 1-1, with Vancouver clinching an important away goal. Despite that, Whitecaps head coach Carl Robinson did not think his team necessarily had an advantage. “If we’re going through, we’re going through against all odds,” Robinson said, before adding his disappointment that his team only managed one goal.

Red Bulls head coach Jesse Marsch spoke very positively about his team’s second half performance, calling his team “brave.” Fielding a few youngsters, Marsch spoke highly about them, particularly about Long: “I thought one of our best players was Aaron Long.”

The Red Bulls’ formation change was a big talking point, but neither coach thought the match came down to that. “Sometimes people get caught up in formations,” Robinson said. “It’s about good players.” Marsch thought the tactics did not make the difference in the match. “It’s a day that doesn’t come down to tactics,” he said before adding that he felt it depended on “the flow of the game.”

The Vancouver Whitecaps host the New York Red Bulls on Thursday, March 2, for the second leg of the CONCACAF Champions League quarterfinals.