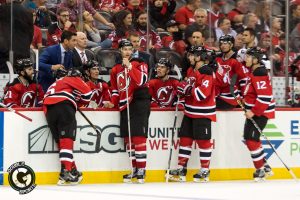 The New Jersey Devils have entered into a one-year affiliation agreement with the Adirondack Thunder of the ECHL. The team made the announcement Tuesday.

“We are proud to announce the New Jersey Devils as our NHL affiliate as we take the next big stride towards the 2017-2018 season,” said Ed Moore, the Thunder’s Governor. We have already reaped the benefits of partnering with New Jersey in the past.  With players such as Ken Appleby playing in Glen Falls before moving on to higher levels. We are excited to grow that partnership on an affiliated basis. We look forward to working with Ray Shero, Tom Fitzgerald and the rest of the Devils organization moving forward.”

Last season, Appleby became the first Thunder player, with multiple games played for Adirondack, to dress in an NHL game. He suited up for New Jersey as the backup goaltender on March 10 against the Colorado Avalanche.

Scott Wedgewood became the first Thunder alumni to make it to the show, when he made his NHL debut on March 20, 2016 against the Columbus Blue Jackets. Wedgewood played in one game for the Thunder during the 2015 ECHL season.

“On behalf of the New Jersey Devils, I am really pleased to announce that we have entered into a partnership with the Adirondack Thunder to become our ECHL affiliate,” said Fitzgerald, Devils Assistant General Manager. “We strongly believe in developing our players on and off the ice. Adirondack will serve as a great first step from here to Binghamton to New Jersey. I am confident that Adirondack’s staff and community will help our players take the next step in their hockey careers. We look forward to working with them.”

The partnership agreement between the two organizations has seen five players lace them up in Glen Falls over the last two seasons. Seven Thunder players have also had personal tryout contracts with Albany in that same time span. This gave those players the opportunity to show their skills at the AHL level.

New Jersey will offer thunder season ticket holders a complimentary ticket to see the Devils play at the Prudential Center during the 2017-2018 season.

The Thunder also announced that they named Brad Tapper, Head Coach and Director of Hockey Operations. Tapper will be replacing Cail MacLean behind the bench. MacLean had recently accepted a position at a higher level.

Tapper has served eight years behind the bench in the professional ranks, with the Rochester Americans, Chicago Wolves, Orlando Solar Bears and Florida Everblades. He also had time at the helm with the North York Rangers of the Central Canada Hockey League.

The Scarborough, Ontario native helped his teams make the postseason in five of his seven seasons on a professional coaching staff. In 2012, he helped the Everblades win the Kelly Cup in the ECHL.

“We are proud to add a coach with Brad’s experience and pedigree to our coaching staff as we enter the 2017-2018 season,” Moore said. “Brad brings a Kelly Cup winning background to our organization. Also, three years of AHL coaching experience and NHL playing experience. We are confident that Brad is the right choice to lead the Thunder on our path towards a successful third season in the ECHL.”

The Rensselaer Polytechnic Institute alumni, played in 435 NHL games and 132 AHL games. During the 2002-2003 season, he was one of eight Atlanta Thrasher players to put up double digit goals. The five-foot-10 forward, skated in 187 games in the Deutsche Eishockey Liga, in Germany. He also skated in 45 games in the Orlando Solar Bears in the International Hockey League.

“I am extremely excited to join the Adirondack Thunder organization,” said Tapper. “The Thunder have proven to be a great organization with a winning tradition and a focus on community. I would like to thank the Coalition for giving me the opportunity to become a part of an area with such storied hockey tradition. I can’t wait to start.”

The Thunder will faceoff in October. They will begin their third season in the ECHL as part of the Devils family. The team has begun their preparations on acquiring new season ticket holders. This will include a complimentary ticket to a Devils game in Newark with the purchase of a package.