Since 2009, Rutgers has sent the most New Jersey natives to the National Football more than any other Big Ten Program.

Rutgers recruiting coordinator posted a graphic on this subject highlighting Rutgers leading the way in the Big Ten with 12 N.J. products drafted since 2009. 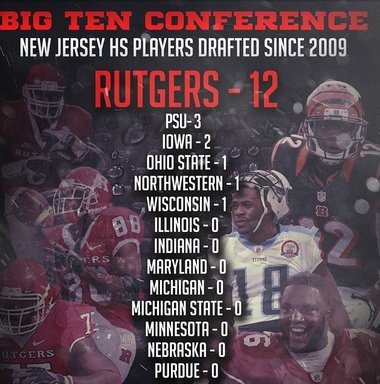 The next closest school, Penn State, with three.

This goes to shows that the top New Jersey high school athletes can stay home and go to Rutgers. They can get a top-notch education at the 279th ranked university in the world according to QS World University Rankings for 2014-15. The student-athletes can play in one of the best football conferences in America. They can have their family come to every single game. And for good measure, if they work at it, they too can possibly hear or see their name being called at the NFL Draft.

What more would you want?

List of players from N.J. that have been drafted since 2009 from Rutgers: