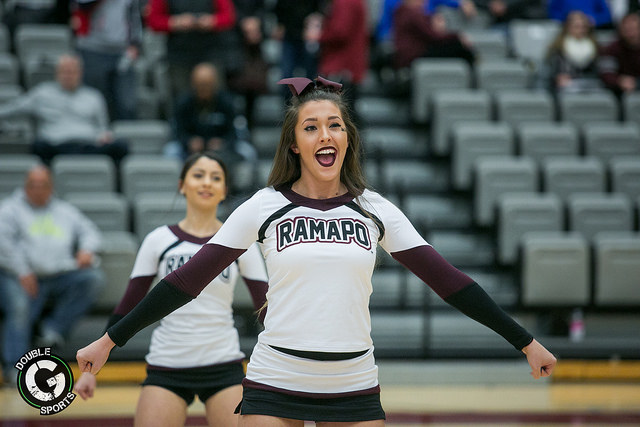 For a third time this season and second in less than a week the No. #7 ranked Ramapo College Roadrunners (23-2, 16-2 NJAC Regular Season Champions) and Rowan University Profs (17-9, 11-7 NJAC) will take the court against one another. However, the stakes will be much greater tonight at the Bradley Center on the campus of Ramapo College with tip-off set for 7 p.m. with an opportunity to advance to the NJAC Tournament Championship Game on Friday night.

Ramapo swept the regular season, winning 96-78 at the Bradley Center on January 11 and 90-71 on February 15 at Rowan. Both games were close at halftime before Ramapo pulled away in the second half.

The Roadrunners are led by NJAC Men’s Basketball Player of Year and First-Team All-Conference selection, Thomas Bonacum. The junior forward is averaging 17.6 points per game this season.He tallied 53 points in the two games against Rowan.

“I’m extremely worried about it because in the past it’s extremely difficult to beat a team three times and had same scenario last year when we lost to TCNJ in the playoffs after beating them the first two times,” NJAC Head Coach of the Year Chuck McBreen said. “When you beat a team twice the kids become complacent because they think they are supposed to win and don’t treat the team the same way and other team that lost twice has nothing but revenge and trying to get back two losses and why a team struggling to beat a team for a third time. If we don’t defend, rebound the basketball and take care of the basketball we’ll have a shot. I’m very concerned our players don’t take this game lightly and up for a challenge a third time.”

“Our philosophy has been to win the points in the paint, points off the turnovers and second chance points and try to win those areas. We did a terrible job guarding them in the first half last week allowing over 40 points and much better in the second half holding them to 26 points.”

“They average 36 3’s a game, Shawn Wilson led the league in scoring and Nick De Persia is an all-conference player,” McBreen continued. “They have a lot of weapons and guys coming off the bench like Jeff Haddock who transferred from FDU. (DaRon) Curry came in with his quickness and disrupted the game with our ability to contain him.”

“Rowan plays a unique style and have to be prepared for what they do in pressing the entire game, running and putting up 3’s. TCNJ came in here last year and got hot making 13 3’s and we went home a loser and if Rowan gets hot could be the same scenario.”

Junior guard Jimbo Long on tonight’s semifinal game against Rowan, “We’re definitely not going to take them lightly and know what happened last year when we beat TCNJ twice and they came in here and beat us. We’re not overlooking and just want to go in there and end the night 1-0. The whole season our strength has been the inside game so hopefully we can go inside and pound it. Our bench has been our asset all season and want to keep it rolling. With Sultan (Aminu) and Nick (Stanek) attacking the boards we’re going to be good and create extra shot opportunities. Tommy (Bonacum) is our guy and if he goes we go and hoping to get him good shots, shooting the ball well and get to the free throw line.”

“We have to contest all their shots and been practicing the last couple of days as they will come out with a full court press so we’re not going to panic and beat them with the pass and attack the basket like we did the last two games.”

McBreen on getting home court advantage in the NJAC tournament, “I think it’s huge and we played for that the whole year. I hope we get a good crowd to get us over the top and our body of work in the regular season was to secure that number one seed.”

Long on playing at the Bradley Center, “We’re very happy to be at home and have a routine because we get to do our walk throughs, sleep in our beds and know the rims. Our crowd is the 6th man and we go as they go and once they get loud we start going on runs. Last year we were younger and didn’t have the experience and know what we were getting ourselves into and this year we know what we have to do.”

Rowan Men’s and Women’s Basketball Advance to NJAC Semi-Finals
Is there life left in UConn?
Posting....