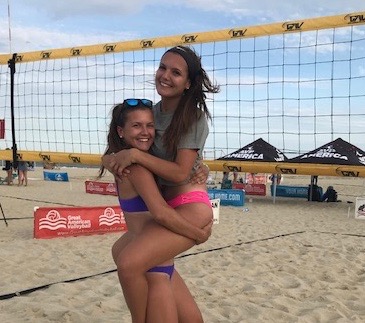 That applied to sports as well with their brother Justin always playing sports. The Corcoran sisters were inspired to do the same as well, whether it was going to baseball games and playing catch, soccer, gymnastics, volleyball, basketball, and softball.

“We were in his (Justin) shadow and just looked at him and said we wanted to do that,” said the Corcoran sisters. “In our fourth grade yearbook there was a question, ‘What do we aspire to be?’ I wanted to go to Penn State and play basketball,” said Veronica. “I wanted to be the first female player in MLB,” said Victoria Corcoran. “I also had basketball shorts on all the time, hair in a ponytail, flap hat and boyish.”

Early on the Corcoran sisters participated in recreation sports in their hometown of Closter. Helping them along the way was recreation director Jim Ottinger and their recreation coach Harry Levinson, who taught them the basics of basketball and softball. However, their most prominent supporters were their Mom Corrine, their Dad Kenneth Corcoran and their grandmother.

“Our Dad was a big sports guy. We would go to the elementary school and practice foul shots all the time, the sisters said. “He always made it a point to make us the best athletes we could be and knew we were serious about sports. His work ethic is insane and so incredibly smart.

“Mom is the behind the scenes person. Getting us to where we needed be, having a schedule, and prepared. She had to quit her job to take care of us because our Dad was working. She made so many sacrifices. We are beyond grateful for everyone for the opportunity and situation they put us in. We would not be anywhere without them. We have the best parents in the world and we are so lucky to have them. Our grandmother, who we called Bubby, would always push us and was so supportive. She passed away but we try to make her proud.

Not satisfied with just playing recreational sports, the Corcoran sisters tried their hand at playing club sports. They played softball for PRIDE under the direction of the first club coach Anthony La Rezza and Valley Stars coaching tandem Tom Antoshak and Phil Paspalas

“We remember high school coaches telling us if we are good enough, they will come and find you. We would study in between being on the road and coming home.”

The Corcoran sisters’ attended Northern Valley Regional High School at Demarest where they played three varsity sports basketball, softball and volleyball in their freshman year. In 2014 the school was the number one ranked public school in volleyball. While at Northern Valley, they helped lead their team to two state championships and four sectional titles.

“We were athletic and loved it. Going into high school, we wanted to make the varsity squad. No wanted us on the team before the tryouts, so we worked so hard and that turned out be the turning point. We did struggle in high school because people were jealous, but the common goal was to win and represent our school and county.”

“For Coach Powell to give us the opportunities on the varsity team our freshman year, we were so excited and happy. She molded us into volleyball players and athletes for the indoor court. She told us at Demarest that there is a flock of geese that are in a straight formation and leading the way. You need to be the people in front.”

“She always had the reputation as the best coach. We had our ups and downs but she’s a life mentor. She broke you down and built you back up stronger than you were before mentally and physically. Holding you to higher standards and not cutting corners. If we did not have her as a coach, it would be completely different.”

“Coach Johnson is one of our key mentors, just like our Dad. I remember meeting him in fifth grade. Our senior season we won the state championship on a walk-off home run. We loved playing under Coach Steffner. He’s so passionate about the sport and knew what she was talking about and was experienced. Coach Hill was always there for us, whether in sports or just trying to survive high school.”

After graduating from Northern Valley Demarest High School, the Corcoran sisters embraced a new challenge…beach volleyball. With their Mom doing research, they were able to get into Chelsea Piers and eventually to meet Kevin Edwards, who played for the Trinidad National team. The Corcoran sisters said he helped transfer their beach mechanics.

Another critical connection was in Rob Crispi, who had ties to the University of New Orleans. “All we knew was the bubble of Bergen County. We went on a visit, and it was an entirely different world and an eye-opening experience to be away from home.”

“We said let’s rebuild the program. We got to go to LSU football games, walking down the French Quarter and turned the corner there is a parade. Both the head coach Millicent Van Norden and assistant coach Amy Grabiec were super knowledgeable and shaped us into good players.”

Catching a major break during their sophomore year, the Corcoran sisters met Peter Walsh from Rockleigh. Already playing with Maxine Walsh on the University of New Orleans beach volleyball team, Walsh constructed a beach volleyball court in the backyard of his home.

“He came down to Texas for a tournament during our sophomore year, and we immediately clicked with him. We created a great friendship and bond that summer. We were there all the time in his backyard training and getting better. Weare so thankful and blessed to have him in our lives.”

Giving Back To Young Athletes

Not forgetting their roots in New Jersey, the Corcoran sisters are just not playing beach volleyball in the summer but giving back to the community as well. “There is the Challenger program where kids have disabilities and we teach them how to play basketball, softball, or run track. We want to make a connection with the girls. We don’t want them going through the struggles without anyone there. We are pushing them until they excel because we seriously care about them.”

“Our advice to younger athletes is don’t give up no matter what and if you love sports, keep playing. Playing sports makes you a better athlete overall. Each sport brings a different demand on your body mentally and physically. It helped us to be where we wanted to be. In club sports, we met people from all over and are still in contact with them. Practicing and traveling with other people helped form a bond.”

“We’re playing every weekend and want to be prepared and ready to go, feeling our best and not having any regrets going into our senior year. There is the Castronavo family in Point Pleasant that have a home. They watch us play in the beach volleyball tournaments and are so supportive.”

Majoring in Marketing/Social Media, the Corcoran sisters are doing an internship this summer in New York City. The goal for them they say is to play professional volleyball after they graduate next year from the University of New Orleans, but they will have to do plenty of research.

“We’re excited and nervous but our book is still unwritten. Everything happens for a reason so it will work out how it should.”