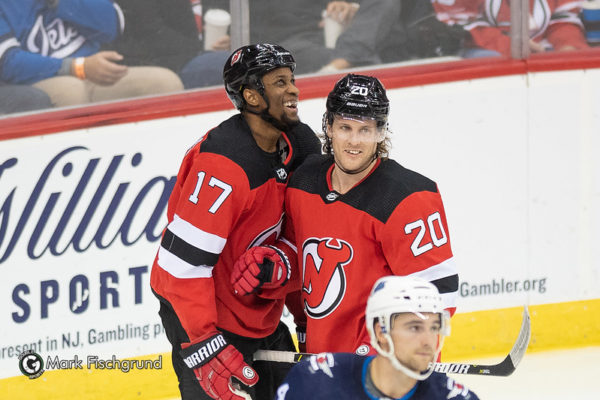 Not the Outcome They Wanted, but the New Jersey Devils Will Be Very Fun to Watch This Season

Coming into a new NHL season, there’s always high hopes for success over the 82 game campaign. On Friday night in Newark, the New Jersey Devils hosted the Winnipeg Jets for their 2019-20 home opener, and the Prudential Center was rockin’, at least through the first two periods, that is.

The Devils had an active offseason, signing notables like right winger Wayne Simmonds through free agency, acquiring offensively-minded defensemen P.K. Subban from the Nashville Predators, a first overall draft pick in center Jack Hughes, and a trade with the Vegas Golden Knights that brought them left winger Nikita Gusev, the KHL superstar, who scored 82 points in 62 games during his most recent season. These are names that get fans excited. They’re names that allow us to think that the depth of skill now available on the Devils roster has playoff potential written all over it. They’re names that give fans a sense of security that the possibility of a disappointing season is no longer there.

Here we are. Opening night. Clean slate. Fresh start. Eyes on the prize, day by day.

The Devils took the ice and were buzzing! At 18:00 of the first period they went up 1-0 with a furry of action in front of Jets netminder Laurent Brossoit, the tally going to Gusev in his first NHL appearance. “Goooooooose” cheers from the fans added to the excitement already escalating at the Rock.

We saw Blake Coleman score two in the second period, his latter goal coming after getting clipped in the face by Taylor Hall’s stick, bleeding with half a tooth left, coming back onto the ice, falling down backwards with strong pressure on his stick, one-handedly mind you, scores top shelf over Brossoit’s shoulder. It’s hard to put into words, but did we just see the goal of the year on opening night?! It was wild!

“Blake played well,” said head coach John Hynes of Coleman. “It’s good to see him. He’s come back and he’s had a good camp. He got right back to his game!”

Heading into the second intermission, the Devils sat comfortably up 4-1, with the energy in the building at an all time high for the night. The third period hits, and the crowd deflated like a pin to a balloon. The Jets scored three unanswered goals in the third, sending the game into overtime and eventually a shootout. Kyle Conner and Blake Wheeler of the Jets each scored intricate beauties to seal the deal. 5-4 Jets.

Alternate captain Taylor Hall, who only played 33 games last season, is finally back after surgery. He seems to think regardless of the score, things need to be better.

“We weren’t playing the way that we wanted to throughout the game,” said Hall. “Whether the score was 0-0 or 4-0, we had some moments, but we weren’t dictating play. That’s what happens sometimes. One goes in, two goes in, then all of a sudden you’re not making the plays that you want to.”

A positive takeaway: he knows the depth and skill are there with all the new faces, they just need to dictate their play more effectively.

P.K. Subban had the fans on their feet for his diving blocked shot in the first and a primary assist on Coleman’s highlight reel goal. He led the team with 26 shifts and 26:21 time on ice.

“Obviously we don’t like the result, but as a player that’s been in the league for a long time what I’m looking for is to see everybody as a group now make those adjustments so next time we’re in that position, we make sure we get the pucks. We win the blue lines. They forced us to turn pucks over at the blue line. They tilted the ice. It takes five guys on the ice to do that, they did a good job.”

The Devils didn’t win, but they were very fun to watch through two periods. You can sense they know their worth. Now it’s time to figure out how to use it productively.

If the Jets are an example of how a team can play on the finishing end of a back-to-back, the Devils need to take some pointers. The Jets opened their season at Madison Square Garden and fell to the Rangers 6-4 on Thursday night. Hynes is going with his same line combinations for Saturday’s matchup with the Buffalo Sabres, and Cory Schneider will be back in net. Schneider left in the third period of last night’s contest due to an undisclosed injury.