Nunzio Campanile makes the jump from Bergen Catholic to Rutgers

In his eight years (2010-17) as head coach of the Crusaders, Campanile registered a 60-28 (.781) record and guided the school to three league titles. Back in December 2017 at Met Life Stadium, Bergen Catholic crushed St. Peter’s Prep 44-7 at Met Life Stadium, the first state championship for the program since 2004. Overall, the Crusaders finished the season at 10-2,  a nine-game winning streak and named the number one team in New Jersey.

Before joining Bergen Catholic, Campanile was the athletic director and offensive coordinator at Don Bosco Prep for 10 years. The Ironmen went 112-6 during that span and won four consecutive Non-Public Group 4 state titles and in 2009 was named overall number one team in the nation.

This past weekend I had the opportunity to speak with Campanile on the phone about the decision to take his coaching talents to the college ranks..

Nunzio Campanile: Coach (Chris) Ash and I had a couple of conversations and I prepared myself for the possibility that it could happen and when he offered me the job, too good of an opportunity to pass it up. A New Jersey guy and grown up here and love New Jersey football and lots of ties to high school football. A good time to make that jump and not to move my family all over the world that is important to me and my wife and kids. Ultimately, it seemed like an opportunity of a lifetime and I took a chance at it.

I have met the guys in my position group, they are talented and really seem like great guys. Now it’s my job to help get them as prepared as they can be, execute and have all the tools to succeed on the field, that’s the main focus in the first year. I have spent a long time calling plays and right now this is different and the job is to get an individual group prepared to do the best job and make that change and work on being an expert on one thing. 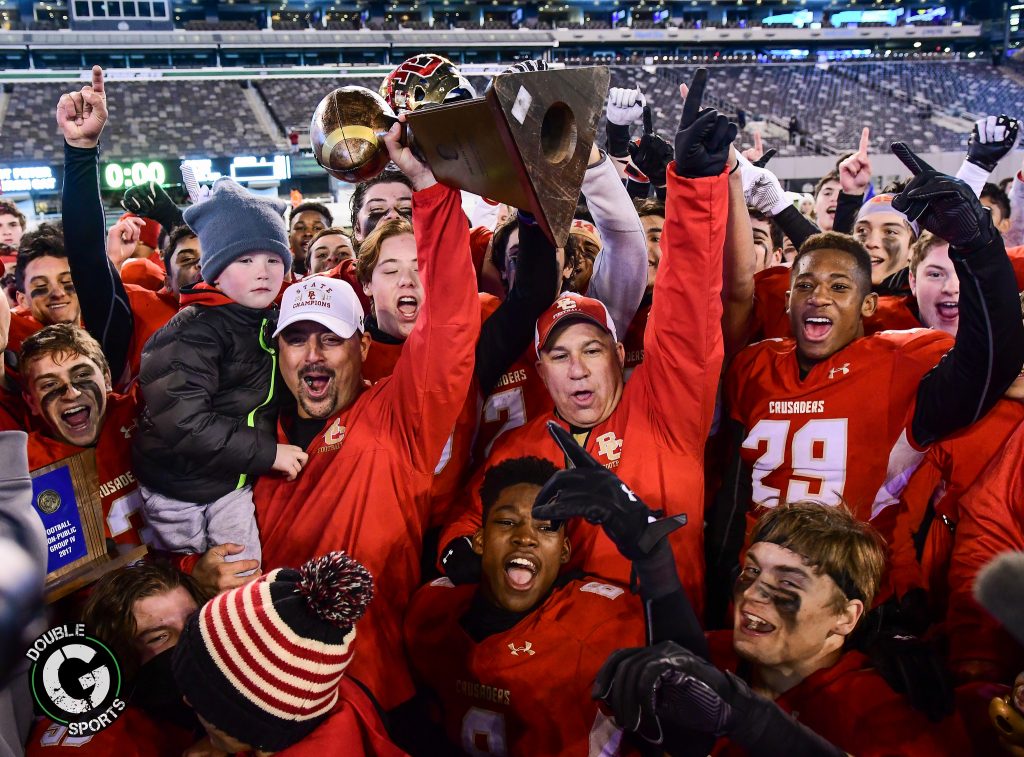 Double G Sports: Can you describe the feeling on leading Bergen Catholic to their first state championship since 2004? Did you envision having this type of success over the course of eight seasons?

Nunzio Campanile: We were really able to put it together and it was a great feeling for the kids and coaches. Made life easier for me and it would have really been hard taking this new position if we had not finished it off and had come close a few times. Being able to get over the hump probably helped me make this decision. Most importantly happy for the school and kids, they worked really hard. The leadership the seniors provided to the younger guys and you had seniors as subs and back-up roles and a lot of character in that group and something they always are remembered for and how competitive they were and integrity they brought to the school.

I thought if we went out and challenged ourselves that we could compete with anyone, anywhere. Happy it came to fruition and appreciate the administration at Bergen Catholic that shared that vision. You learn by challenging yourself and creating adversity and kids got great experiences out of that and we didn’t win every game but never afraid of challenging ourselves, going out playing great competition and kids learned a lot of lessons. How many kids in high school get to play on national television, get on planes and see other parts of the country?

Double G Sports: This past season, you had (Fred) Stengel and (Greg) Toal on the coaching staff, what did that mean to you and rest of the team?

Nunzio Campanile: It was tremendous and those guys are very special and what an impact they had on our team, kids and great football coaches. When you get them around your players, you really have a chance, see them grow and get better. Our kids and players benefit from it and collectively those guys have 70 years of experience and tons of wins and guys who made a huge impact on men through the course of their career.

Double G Sports: Football runs very deep in your family, your father coached 10 seasons at Paramus Catholic, your brother’s Anthony is an assistant coach at Boston College, Nick, offensive coordinator at DePaul Catholic and Vito after coaching Seton Hall Prep the past three seasons is succeeding you at Bergen Catholic. Can you talk about Vito becoming the new head coach of the Crusaders and level of success the Campanile family has enjoyed in football?

Nunzio Campanile: I think it’s a very special thing and he (Vito Campanile) is going to do an unbelievable job. Obviously a great coach and he is going to continue some of the traditions and build upon them and leave his mark on the place. He’s great with kids and have an impact on their lives. He has the unique experience because he has coached in the Catholic schools, Seton Hall Prep and Paramus Catholic and won multiple state championships. He is well rounded and brings great perspective to the job and has roots in Bergen County.

It’s really cool and all starts with my dad. He had an unbelievable passion for football and love for this sport and impact he had on kids. He has been doing it for over 50 years and instilled in us to make a difference in kids lives and has paid off dividends. My dad is probably the most influential person I have ever been around when it comes to coaching and important to me but my brothers.

Double G Sports: Can you talk about the support you have received from the Oradell community and Bergen Catholic fans/students?

Nunzio Campanile: What a special place and one thing I was taught about Bergen Catholic is it’s exceptional and everyone working to strive to be greater is going to be supported and push you to do your best every day. Something special when you walk on to that field (Crusader Stadium) and you see 600 kids down the block and lined up on Oradell Ave. for every home or away game. In the state championship game it seems as though it multiplied with people coming back from college. We did a great job getting alumni from the 60’s all the way through last year.

A really special place and not that common and I wish you could see that at every high school because every kid should experience and never could thank them enough what they did for me and special time in my life for my family and cherish it forever.