As the midway point in NYCFC’s season inches closer, it is time to reflect on the season so far. Before the start of the season, NYCFC was a top choice by many to be leading the MLS. However, things don’t always pan out how you hope them to.

To best answer, that question, every player (plus head coach Patrick Vieira) needs to be analyzed. This article will examine the play of NYCFC’s goalkeepers this season. Since a season ago was full of goalkeeping mishaps, this year’s goalkeeper ratings surely are of vital importance. 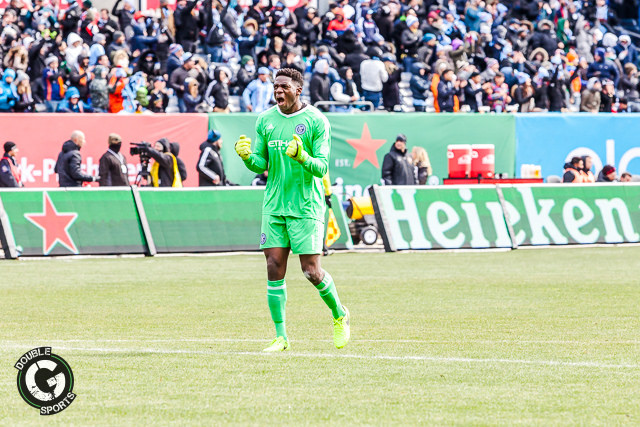 Since making a move from Chicago (and temporarily Atlanta,) Sean Johnson has found a home at Yankee Stadium. Although Johnson ranks 10th in saves made (38,) Johnson has been a rock in net for NYCFC. The 28-year-old has held opponents to only 19 goals on the year, in which most he could not have stopped regardless.

That tally could be a lot higher if it weren’t for Johnson. In many instances this year, the 6’3 goalkeeper has bailed NYCFC out after a defensive lapse. Whether it is an incredible save on a one-on-one or an amazing leap to deny a goal, Johnson has been on point every game this season.

Unlike last year, NYCFC fans do not have to worry about their man in net. Johnson makes the saves he should, commands the back line, and bails out his team on multiple occasions every match.

Because of his string of strong performances this season, Johnson has notched his way onto the USMNT Gold Cup 40-man preliminary roster. Not a bad start to the season for the Atlanta native.