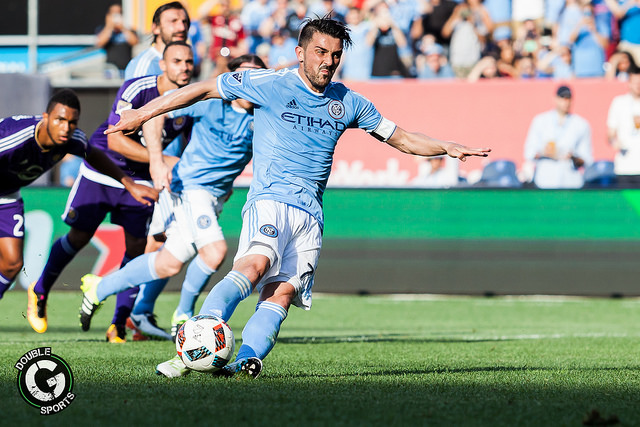 After a 1-0 win over Sporting KC on Saturday, NYCFC’s up and down preseason finally came to a close. Additionally, in the words of coach Patrick Vieira, it has been a “frustrating” preseason. With that being said, what does this mean for NYCFC fans? Will this preseason have a big impact on the success of the team during the regular season? Yes and no. However, practice is vital for a teams success. In the words of Pele, “practice is everything.”

Part of the reason why this preseason was frustrating in the eyes of Vieira was because the new signees did not get enough playing time or training time with the team. For example, new designated player, Maxi Moralez, only was able to get in a short amount of game time with the team as he was signed midway through February. Fortunately for Vieira, that limited game time was successful, as Moralez assisted David Villa on the winner in the game against Sporting KC.

For other new additions such as Rodney Wallace, Yangel Herrera, and Alexander Ring, playing time was limited. However, their spirits are high with the season right around the corner.

“I was excited about the idea of coming to New York,” said Ring. “I am very confident in what I can do and they (fans) can see for themselves.” Ring continued on to say he is “here to win” and that he “didn’t come here for second place.”

With the Scandinavian making the transition from 1. FC Kaiserslautern in the 2. Bundesliga to NYCFC in the MLS, another Scandinavian seems to be on his way out of NYCFC. In an Instagram post earlier this week, Mix Diskerud, the highest non-designated player on NYCFC, wrote a poem while strongly hinting that he was on his way out of the Big Apple.

“Somebody told me I’m not part of a plan

’cause the budget is tight

be broken, to improve 5-6 positions – in exchange for only one man.”

After having been dropped from the squad midway through the season by Patrick Vieira, Diskerud has been linked to a move out of NYC. After this disgruntled post on social media, a move out seems imminent.

With all of the transactions and signings throughout the offseason and preseason, NYCFC will head into their first matchup of the season (Sunday against Orlando City) with a talented line-up that hasn’t yet been solidified. On the bright side, Vieira seems confident that the team is better than ever before.

“I think we have better player overall,” said Vieira. “There will be more competition between players…which will maker the better.”

Despite the fact that the full team hasn’t been together until the very last part of preseason, the confidence of Vieira and the new signings can be a positive sign for fans. If there is one takeaway from this preseason it is that NYCFC’s confidence is at an all-time high.

Do not expect the team to come out of the gate in perfect form, as it will take a few matches for Vieira to find his starting eleven. But, do expect to see multiple lineup changes in the first few weeks along with some improved depth on the bench. This team this year is loaded, motivated, and determined to bring home the title after it is all said and done.