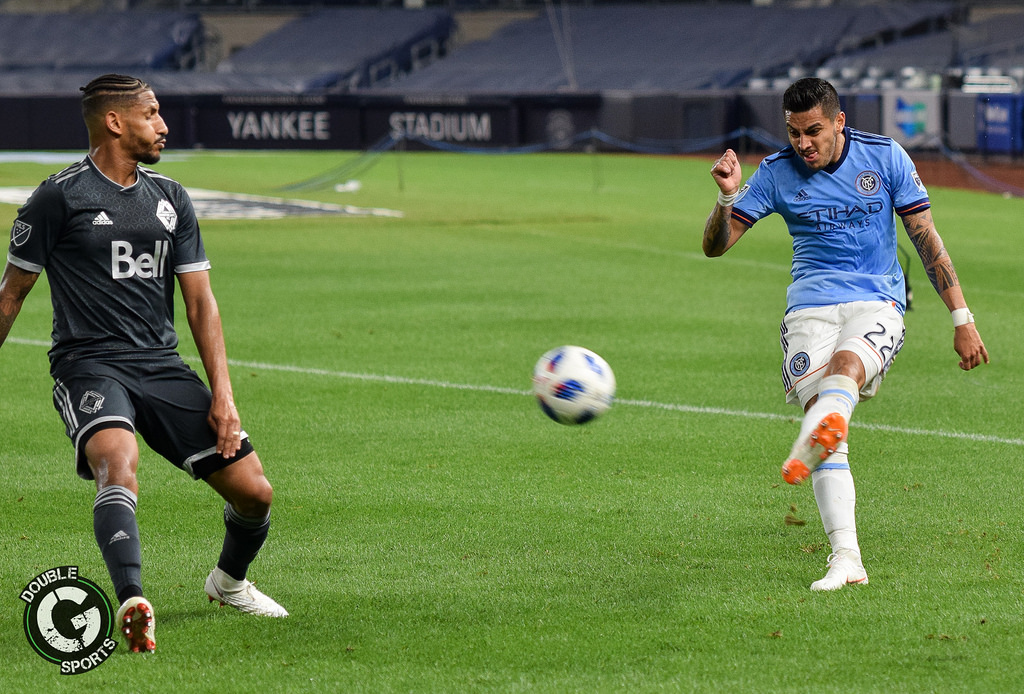 Saturday night, the boys in blue returned to their home turf in Yankee stadium. NYCFC returned after a horrible 3-1 loss against the Sounders in Seattle.

The boys in blue started the first half attempting to find a way to score the first shot, but the Whitecaps Scored the first goal in the 22’. NYCFC didn’t back down as they kept taking shots and finally Jesus Medina produced the 1st goal of the night for NY in the 46th minute during extra time.

After half time NYCFC returned to the field with much more confidence. With just 45 seconds into the second half newcomer and 19 year old Midfilelder Valentin Castellanos scored on his Debut with NYCFC. The attacking midfielder joins on loan until the end of the 2018 season. After the game Valentin explained how comfortable he’s been feeling since joining the NYCFC.

“The truth is everyone here is good, Maxi has helped, David too as a person has helped me a lot,” he said. “I’ve been here for a week and truthfully I feel very welcome and comfortable and happy for this opportunity.”

During the second half the boys in blue showed a strong offense but the defense was having a poor performance. As the game came to an end the Vancouver Whitecaps tied the game in 87th minute after a cross from Brek Shea gave Erik Hurtado the opportunity for his 2nd goal in 4th appearance this year.

“We are going to prepare the same way as always, train better, and stronger,” said Head Coach Doménec Torrent when asked how the team will prepare for the next game against Toronto FC. “We will watch Toronto and observe if they have changed anything and move forward the same way onto the next game because every rival is different.”

Union leave their mark on 2018 MLS All Star Week
NYCFC must keep focus on Philadelphia ahead of next week’s Derby
Posting....