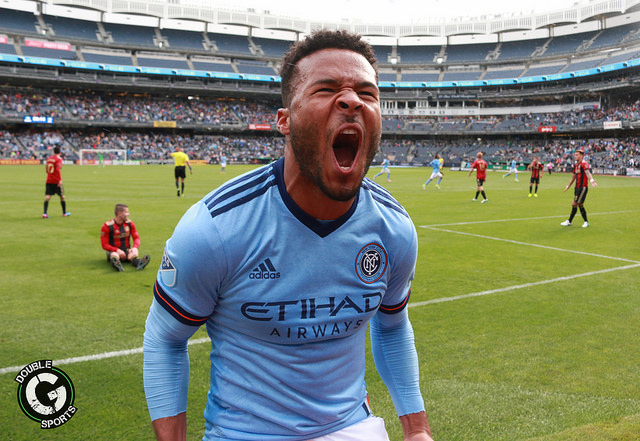 NEW YORK, NY — For the first time, NYCFC was the veteran club in an MLS match. With light showers in the air on a cold summer day in The Bronx, NYCFC took on newbies Atlanta United.

Heading into the match, everyone expected to see a plethora of goals. Surely enough, goals were in abundance at Yankee Stadium.

For the first time since arguably the home opener against DC United, NYCFC were the aggressors for the first half-an-hour. After many close chances, NYCFC got their emphatic opener.

After a flick-on by Rodney Wallace, David Villa gave NYCFC fans a bit of Deja Vu, scoring a near identical goal to the first one he ever scored for the club over two years ago.

With that piece of magic from Carmona, Vieira’s men entered halftime knotted at a goal apiece with Atlanta. In the start of the second half, NYCFC once again were the aggressors and again put pressure on the Atlanta net.

Thirty seconds into the half, Rodney Wallace had himself a trio of goal line chances. Somehow Atlanta managed to keep all three of them out with three different acrobatic clearances, leaving the “Rodfather” in frustration.

After putting the frustration behind him, Wallace got his revenge at the hour mark. After Ethan White had whipped in a ball from the wing, Wallace channeled his best Villa impression by backheeling a ball into the Atlanta net.

“There is a reason why we brought Rodney to this club,” praised Vieira. “He is alway at the right place to score the goals or to help the team. He does the dirty work and was rewarded with a goal today.”

Moralez’s goal ended up being the final goal of the match for both sides, sealing the final score at 3-1. Atlanta United struggled against their former goalkeeper (for about half-a-day,) Sean Johnson, leaving the Atlanta native happy with the team’s defensive performance.

“For me, it was a game we controlled for the most part,” said Johnson. “I thought defensively we were solid. Limiting their opportunities was the goal for today’s game, and we did that.”

With two consecutive great wins, NYCFC sits in third in the Eastern Conference. Additionally, NYCFC is tied with Toronto FC for the best goal differential in the conference at plus seven.

For Vieira, today’s win was nothing short of “a big team performance.” For the first time all season, NYCFC has won two consecutive games, producing three goals in each of those two wins.

It seems like NYCFC is finally finding its top form as of late, even with designated player Andrea Pirlo on the bench. In their next match on May 14th down in Texas, NYCFC will face FC Dallas, who are the last remaining undefeated team in the MLS.