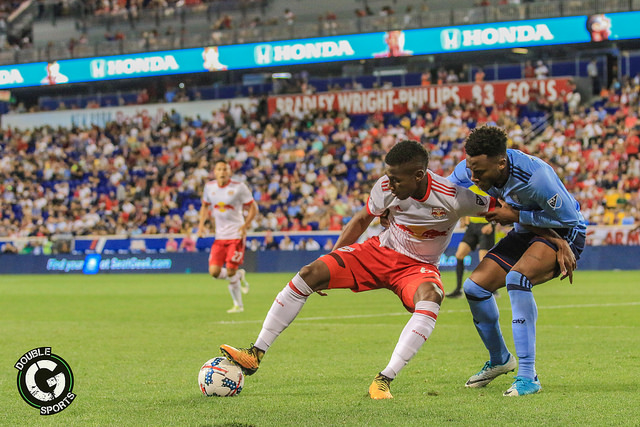 For the past two seasons, NYCFC has gotten dismantled and torn apart by their rivals from across the Hudson River. This season, the history books have changed narratives, as experience and grit highlight a new ‘Boys in Blue.’

In a match in which the New York Red Bulls dominated possession, wreaked havoc on the NYCFC backline with their high press, and had the best scoring chances of the match, NYCFC proved to be resilient, earning a point on the road in the last Hudson River Derby of the season.

Despite losing Ethan White to injury early in the first half, NYCFC fought off the Red Bulls pressure for the entire match, thus allowing Maxi Moralez to grab the opener during the second half. Sure, the Red Bulls deservedly got back into the match shortly after, but that Moralez goal and a 1-1 draw showed that even when the kitchen sink is coming at them, NYCFC can still be a stubborn side to beat.

“I was thinking it’s a funny game sometimes. Right?” said Red Bulls head coach Jesse Marsch. “How many sports does a team dominate like that and then be down?” To Marsch’s point, not many. Unfortunately for him and his team, soccer is one of the anomalies.

As the old saying goes, ‘when it rains, it pours.’ In past Hudson River Derbies, that was most certainly the case. If this match, which ended in a 1-1 draw, took place a season ago, you may have needed two hands to count how many goals the Red Bulls won by.

When NYCFC faced an onslaught of pressure a year ago, they caved. The team would get shellshocked and fail to make the game competitive once again, which explains why NYCFC let the Red Bulls spot seven goals in a Hudson River Derby before.

This season, Patrick Vieira’s second at the helm, NYCFC carries a certain swagger that speaks levels of maturity and confidence. According to Vieira, experience plays a big part in the DNA of NYCFC and prevents them from ever counting themselves out in a match.

According to the results, that is most certainly the case, as NYCFC won the MLS season series against the Red Bulls (2-0-1) for the first time in its three year history. Saturday night’s performance showed exactly how NYCFC achieved that benchmark, which is a result of tenacious play and a dedication to grinding out results.