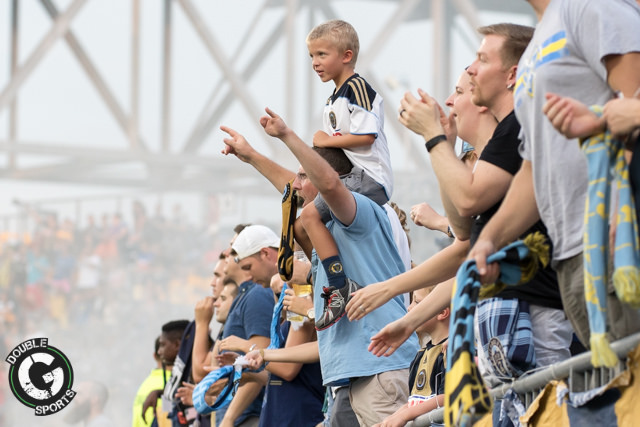 The Philadelphia Union officially announced the signing of US International defender Oguchi Onyewu yesterday. He had been on trial with the team during the first week of preseason. Onyewu brings a pedigree of international experience but has faltered in the last few years. A tragic injury at AC Milan in 2009 ended a potential meteoric rise. After signing a long term deal with Sporting CP in 2011, Onyewu looked to be the starting center back for the US national team for many years to come.

Injuries and changes at sporting director set him back a years that saw him lose all career momentum he had been building. Ever since then the affectionately known ‘Gooch’ has bounced around trials at Rangers and in MLS but hasn’t been signed. Philadelphia will hope that he brings valuable experience to the younger back line and can put in performances that will bring the biggest doubters back to reality.

I have followed his career closely as I do most US internationals abroad. Gooch has shown himself to be a valuable locker room keystone and a genuinely good human being. Although the Union are no longer alone in the strategy of building from the academy and finding undervalued players, it seems their competitive advantage will be their locker room chemistry. Having followed soccer for years, it’s borderline impossible to build a team full of good people that like being around each other. Media day had me in awe at the camaraderie and excitement around the people that were a part of the team. Jim Curtin mentioned the chemistry and CJ Sapong really impressed me with his maturity and thoughts on transitioning into a leader.

Here is where Onyewu fits whether he still has gas in the tank or not. He will be the cornerstone at which the Union build their leadership and personality. If the Union want to compete with Giovinco in Toronto or Villa in New York or the countless other superstars, they will need to be a unit greater than the sum of its parts. Each player will need to punch above their weight and be motivated to take the next step in their respective careers. Onyewu has been there and done that.

I mentioned earlier that he had a season ending injury in Milan and I want to share an anecdote that will show you his personality. He didn’t take the injury lightly for himself or for the team. After the injury sidelined him for a full year, Gooch added another year to his contract at $0 pay because he felt that he let his team down. A professional soccer player voluntarily added a year to his contract to play for free. This is the type of player that the Union are adding. He has played in World Cups, he has succeeded in Europe, and he has also experienced monumental letdowns. Experience means nothing if the person does not take a lesson from it. The Union added a player that takes a lesson from everything and shares it with his peers.

There are young players like Yaro and Trusty that will need guidance. There are players like Sapong and Pontius at a turning point in their careers that need a final push to the next level. There are veterans like Edu and Carroll that need continued motivation to stay connected. Finally there are fans like you that need to see a team that fights until the last moment. Gooch is the catalyst that will engrain those mentalities in the team. Some may say that he won’t see the field often, but for a player like him it won’t matter. The influence has already begun in the first week of camp.