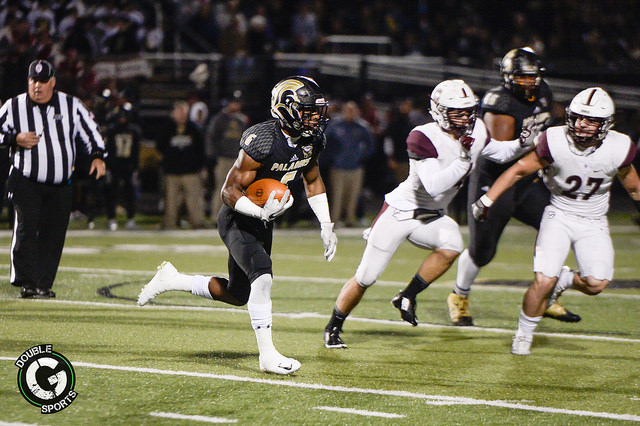 Heading into the Non-Public Group 4 Semifinal the Paramus Catholic Paladins (9-2) had won five straight against the Don Bosco Prep Ironmen. On Friday night, at Paramus Catholic High School, both team’s duked it out for four quarters in a heavyweight fight, trading scores.

The game came down to one final play in the 4th quarter with a pass by Ironmen quarterback Tommy DeVito falling incomplete in the end zone as the Paladins held on for the dramatic 35-29 victory. They now advance to the state final game at MetLife Stadium in East Rutherford in two weeks.

“A great game that came down to the wire and two excellent football teams that lad it out all on the field and it was great to make one more play at the end,” first-year Paramus Catholic Head Coach Dan Sabella said. “We got a talented team and when they play together and unselfish we’re good as anybody out there. We kept our poise and been in this situation before and great to finish the job.”

“Andrew has been doing it all year and we had the enjoyment of seeing it 11 times this year and one more time,” Sabella continued. “We have two talented backs but people don’t talk about the offensive line enough. We have two backs close to 1,000 yards. Fitzpatrick played his best game of the season and all over the field tonight and unbelievable on special teams. They’re were contributions up and down and what it’s all about this time of the year.”

The Paladins were led by senior quarterback Andrew Brito, who rushed for 114 yards while throwing for 87 yards and tossing one touchdown. Senior running back Alijah Jackson churned out 114 yards on the ground along with two touchdowns and junior running back Jonathan Clark added two scores.

“It was battling of who wanted more and at the end of the day we wanted it more,” said Brito. “Everybody on the offense is good about picking each other up and when I threw that pick six everybody came up to me and said you’re going to be good and don’t worry. The offensive line does an amazing job opening up holes.” 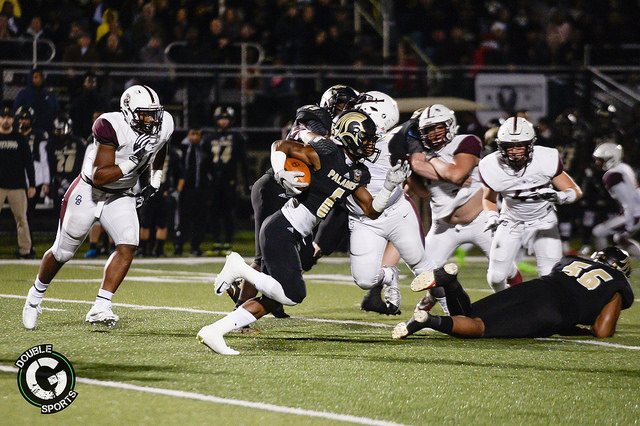 Paramus Catholic quickly jumped to a 7-0 on their opening drive with Brito completing a 51-yard pass to senior wide receiver Javon Turner. On first and goal from the Don Bosco nine-yard line, Jackson took the handoff and strode into the end zone for the score. The Ironmen were shaky on offense early, plagued by penalties.

Early in the second quarter Jackson ripped off a 57-yard run moving the ball to the Don Bosco one-yard line. On the ensuing play, Jackson tacked on his second score barreling in for the score extending the margin to 14-0 with 11:16 left.

“Just like every game I owe it to my offensive line and just made the plays,” said Jackson. “Getting off to that start we felt comfortable where we were and knew what we had to do. We knew we had to put points on the board.”

Just when you thought things were bleak for the Ironmen, Jalen Burger ignited a spark on the following possession, breaking free for a 74-yard touchdown trimming the lead to 14-7. It was Don Bosco’s defense turn as defensive back Sharkey Gavin stepped in front of a Brito pass and returning it 40 yards for the score knotting the game at 14-14 with 10:06 left.

Back came the Paladins, marching down the field swiftly thanks to Brito’s running and on 3rd and 10 at the Ironmen 17, Brito fired a bullet to Matthew Zelaya for the score, putting Paramus Catholic back on top 21-14. Don Bosco had a response, as Burger gashed the defense for a 33-yard run. On the very next play, Burger displayed his explosiveness with a 21-yard scamper into the end zone. However, the extra point was no good as the Paladins maintained a 21-20 lead with 3:10 left.

The Paladins offense kept clicking on all cylinders in their next series as Brito rumbled 57 yards to the Ironmen 21-yard line. Facing a 3rd and 4 at the 15, Jackson steamed ahead for 12 yards. On second and goal at the one, Clark plowed through for the score extending the lead to 28-20 with 1:05 remaining.

With 59.3 seconds left in the first half, Don Bosco quarterback Tommy Devito went to work completing a 23-yard screen pass to Kevin Brennan. DeVito used his legs dashing 21 yards. Once again penalties derailed the drive forcing a 37-yard field goal by kicker Brandon Marrrero reducing the lead to 28-23 and ending a wild first half.

The second half turned into a more of a defensive battle as both defense dialed up the pressure. The Paladins registered five sacks including two by senior linebacker Khyron Fitzpatrick. Toward the end of the third quarter, Paramus Catholic went to smash mouth football and on 3rd and 5 from the Ironmen 5-yard line, Clark juked and weaved for his second tally of the game making 35-23 with 1:14 left.

There was no quit in Don Bosco as Brennan returned the kickoff to the 48-yard line. It just took one play for the Ironmen to get back into the contest with DeVito dumping a pass off to Brennan in the flat and rumbling down the left sideline for the 52-yard score but the kicking woes as Marrero missed the extra point leaving the score at 35-29 with 29.5 seconds on the clock.