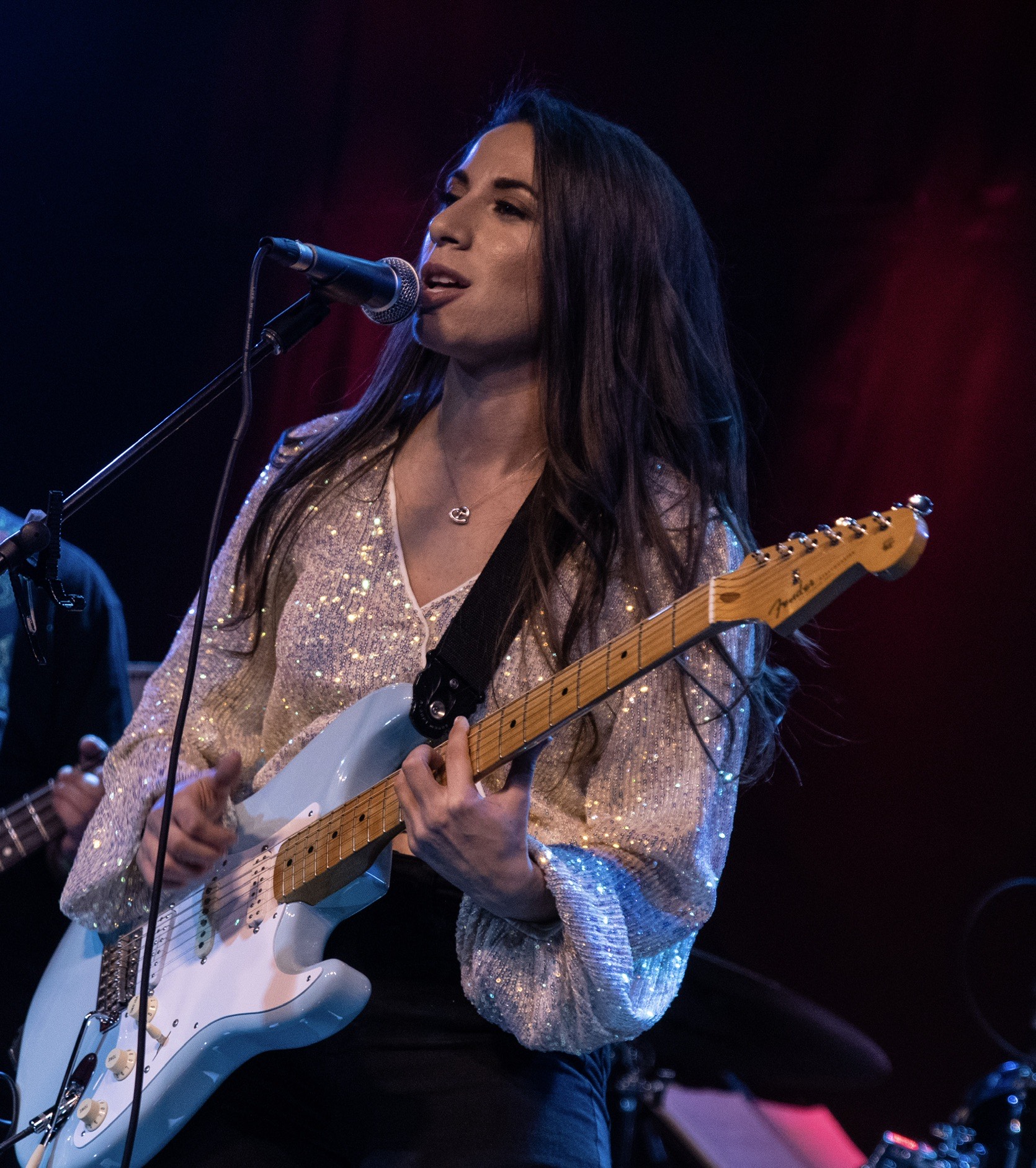 Growing up in Montvale, New Jersey, Brianna Musco enjoyed the competitive nature of playing sports. As the only girl on her neighborhood block, Musco accepted the challenge playing alongside her brothers’ Frankie and Dominic and other boys.

During summers, Musco played on baseball and basketball summer teams. Looking to further develop her skills, Musco wanted to play on the boys teams. Her father Frank ended up speaking to the commissioner of both leagues, clearing the way for Musco to participate.

“I had something to prove,” Brianna Musco said. “I always say that my athleticism stems from just purely playing in the backyard and getting those reps in without knowing it. Nothing against girls but I always wanted to know why I couldn’t play with the boys.”

This persistence and attitude comes from her family. After all, they displayed a high standard of excellence in athletics with Musco’s dad becoming an All-State catcher, and her brother Frankie going on to play football at Salve Regina University and then professionally in Germany. While her mom, Staci Musco, wasn’t an athlete, her role was just as important in Musco’s life.

“She is the one where I get all of my personality from, such as the positivity and seeing the good in everything.”

While attending Pascack Hills High School, Musco flourished as a three-sport athlete in soccer, basketball and softball. During those four years of high school, Musco ascended to the top of the scoring record in soccer with over 100 goals. For both soccer and softball, she earned first-time all-county and all-league honors from The Record and Star-Ledger newspapers. In basketball, Musco was named to first-team all-league and second team all-county. Her success didn’t stop there. Musco also received 12 varsity letters.

During her senior year, Musco discovered another passion: music. Musco once participated in Battle of the Bands, and her band won.

“It was pretty much like a high school musical,” Musco described. “A bunch of kids at my own studio kind of put it together to create a band. We played Fleetwood Mac’s ‘Gotta Go Your Own Way,’ and I wasn’t expecting to win.”

Musco pointed to her uncle Vincent Musco, who owns Westwood Music Studios, as the biggest factor in her musical development.

“He’s probably had the biggest influence on my future more than anybody because I’m following music as my career and passion,” Brianna Musco explained. “I’m biased, but from a musical educator standpoint, he’s the best musical instructor you could study from the tri-state area. He has great patience and an ability to explain things differently for each student to understand.”

Although Musco initially committed to Hofstra University for a soccer scholarship, she soon pivoted to Monmouth University and took a year off from soccer.

“That freshman year experience was the best thing that could have ever happened to me,” said Musco. “I made friends with people that did not know me as an athlete and musician, and I lived with eight girls in a suite and had so much fun. I did realize eventually that music was the answer.”

Although Musco re-discovered her zest for playing soccer again when she transferred to Delaware State University to play under Head Coach Kerri Scroope, she quickly transferred back to Monmouth to solely focus on music.

“I knew I couldn’t play soccer anymore and knew music was the answer,” said Brianna Musco. “I wanted to be in a place like Asbury Park where the music scene was. They [Monmouth] had a world class multi-million dollar studio on campus, and I could study with Professor (Aaron L.) Leone, who is just an incredible and insane guitar player.”

Paving a Way for Her Future

In 2018, Musco’s determination and worth ethic paid off as she graduated with a degree with honors in classical guitar. At her band’s first show, she gathered an immense support from family and friends, as they gathered to listen to them perform three songs Forever, Ringling, and Not Enough.

“They actually had to close the doors because it was a fire hazard and only supposed to be 150 people inside,” Musco added with a laugh. “It turned out to be 165. I had friends from high school, college, roommates, athletics and my small Italian 4-foot-10 grandma in the front row.”

“You see a band having fun with each other on stage and think that is such a great thing in understanding how a drummer thinks and our bassist is different than other guitars. My bandmates are like my favorite human beings in the world. My drummer Owen Flanagan, base player is Luigi Sardi, on guitars are Lucas Jones, Bryan Rojas, Nicky Ryan, and Deaglan Howlett, and the engineer is Nick Thurl Mavromatis.”

Musco said she has always been a classical solo guitarist but had to learn effective ways to communicate the sound she was trying to create with the boys in her band. For the first year, Musco and her band played rock and roll songs at local bars. Then, in January 2019, she began the process of recording. Her first record was released come June.

Emailing as many bars as she could, Musco found a reliable owner in David Gaskill at Debonair Music Hall in Teaneck, New Jersey. He promoted the venue and was very interested in Musco and her band opening up for a larger band to provide some good exposure and notoriety.

“A lot of these places you reach out say ‘sure, you could play here, but you have to pay rent to the place to guarantee the amount of people that show up.’ I have gotten to the place where I’m able to narrow it down to essential places in New Jersey,” Musco said. “Dave has always given us an incredible split on the tickets and hospitality-wise is really nice.”

Even with every performance, the mindset of an athlete sneaks its way into her routine. Musco was adamant about videotaping every place the band plays. Similar to a film session, Musco analyzes every fine detail from the show. This sets her up for performances worldwide.

Musco not only had the opportunity to travel within the United States, she’s also had the chance to enjoy the various sights and sounds across the globe. For Brianna Musoco, it was all about connecting with the fans at shows, as well as offering merchandise items at a reasonable price. Plus, she has many memories from performances in both England and Barcelona.

“People who live in international countries just love to dance and sing to the lyrics,” Brianna Musco mentioned. “There is a spot in Liverpool, England where Adele, Jimmy Hendriz and The Beattles would play at when they were younger, so we played on an off-night. It was just me with an acoustic guitar.”

Another favorite memory of Musco’s was in Barcelona. Through Instagram, she was able to connect with guitarist Liam Cloud.

“His guitar tone is unreal, and he can play a beautiful rhythm guitar,” Musco said. “He actually had his band play with me during the set as we had been conversing.”

Just as how Musco connected with Liam’s guitar tone, many people are equally drawn to the sweet sound of music.

“It’s kind of a universal opportunity where everyone can connect regardless of language,” Musco added. “My favorite thing is to meet people at a show. I will bring my guitar and pedal board off stage so I can immediately start talking to people that were in the audience.”

When she is on the road, Musco enjoys finding quiet spots where she can write music as well. One of her favorite places of peace was in Florence, Italy. She watched the sun set over the skyline with some pizza and gelato.

… But A Unique Sound

“I always thought that creating a song and being able to bring a different sound with the same likeness of mainstream pop music brought me the most joy, Brianna Musco explained.

Where does that sound come from? The good times in the studio…

“It just kind of reflected all that joy that happiness and like inside jokes in the studio. I feel like people resonated with that and reacted with it in the recording.”

Plus, she draws inspiration from iconic artists such as Carole King, Janet Jackson, Joan Jett and Stevie Nicks.

Although the final product feels incredible, it’s not always an easy tale to get there. Her producer, Mario Rodriguez, pushes Musco to let her emotion come through and be versatile in her musicianship. Though she’s been sidelined from performing amidst the COVID-19 pandemic, Musco has been exploring her music and its creation.

“I’ve never been a huge fan of like harping on bad stuff,” Musco said about not being able to tour. “I feel like every day I’m always asking for more hours in the day, so don’t waste them on negative energy. I have a whole year to get ready for this awesome festival and I’ll have even more music. I’ll have even more time to grow.”

Musco is confident she will be back on the road playing in front of her fans by next year, but until then, she is paying it forward by providing music lessons for younger children and working as an assistant coach on the women’s soccer team at her alma mater Pascack Hills High School.

“I’ve been teaching for the last three, four years, turning them [her students] into rock star monsters able to shred and they really are the light of the week,” Brianna Musco described.

Here’s one of those stories that make her smile:

“I was teaching barre chords on the guitars. That is a little difficult and tricky, and it takes a lot of finger strength to be able to get a sound out.” One kid has been trying to get a barcode for months. So, at one point, I answer the FaceTime call, and he was like, ‘Watch this!’ He just does a perfect D minor barre chord, and I was so proud of the kid like that was amazing.”

Teaching brings joy to Musco and so does her hometown.

“I think Bergen County is the best place to be in the world. You have so many different avenues of possibilities. The fact that I even put in a sentence what Bergen County means to me. I don’t take that lightly.”