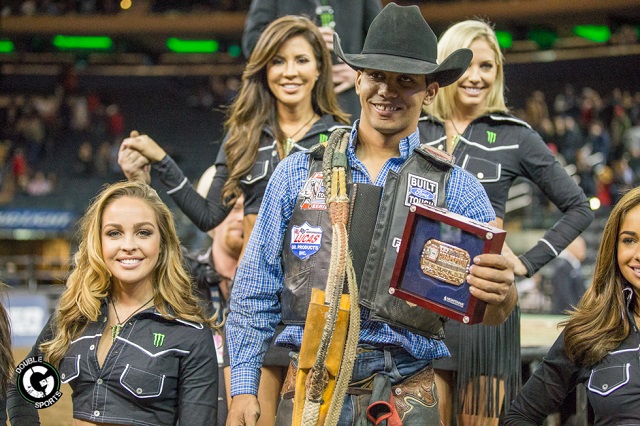 New York – This past weekend, the professional bull riders of PBR were in full form at Madison Square Garden for an event that had fans at the edge of their seats until the final moments when Paulo Lima captured the $129,500.  For those who follow PBR they know that Lima is an up and coming star who earned an opportunity to participate in the Monster Energy Buck Off by winning the first BlueDEF Tour event -the PBRs expansion tour – of 2016.  Lima earned 725 PBR points and is now the top rider in PBR.

Round 1 of the event began Friday night with the Top 35 bull riders on the BFTS competing. Round 2 was on Saturday, and Round 3 on Sunday afternoon, with riders facing one bull in each round.  The Riders with the Top 15 scores after three rounds advanced to the BFTS Championship Round for an additional ride and a chance at the $100,000 event title.

Going into the final round, the bull riders choose the bulls they wish to ride on and depending upon how well they did over the past two days determines the pecking order.  In other words, the better you do, the better your bull! Lima chose to ride Cochise.

Besides Lima, the others in contention for the first prize going into the championship round included familiar names like world champion JB Mauney and Robson Palermo.  Mauney chose to ride Shaft, and managed to earn an impressive 89.25 score.   Mauney was bucked off of Shaft on Friday night so this was somewhat of a revenge ride for him.  So the Sunday ride was even more impressive given this set of circumstances. Up next was Aaron Roy who matched Mauney’s score in the Championship Round.  Then Joao Ricardo Vierira earned a 90, putting him on top.  Palermo scored 89.25 upon Fire Rock.  Lima scored 90 points in the Championship Round and the cumulative score put him on top and he was crowned victor!

Palermo had an impressive showing and earned the number two spot.  Although he had been battling shoulder injuries, he went 4-for-4 to capture second place.  Palermo and Lima were the only riders to go 4-for-4.  Palermo earned a total of 495 world standings points for the finish and moved into the No.4 position in the world.  Coming in at number three was Joao Ricardo Vieira who earned 90 points on Time Bomb elevating him to third.  Aaron Roy received 259 world standings points for fourth place and Mauney received 258.25 points placing him in fifth.

There were more than 34,900 fans in attendance over the weekend at MSG.  The event is the first of four PBR Majors.  The Built Ford Tough Series ( BFTS ) – the Monster Energy Buck Off at the Garden is the 10th year MSG has hosted this event.

There is little doubt that fans were enjoying themselves – and true to form the PBR goes out of its way to show appreciation.  There were free boots, belt buckles, and lots of other prizes for some of the lucky fans in attendance.  Flint Rasmussen, the exclusive arena entertainer for the PBR who hails from Choteau, Montana was his usual energetic self, paying homage to the action figures in his image brought by fans.

In addition to the awesome fans, worth noting is also in attendance this weekend were David Wright of the NY Mets, NASCAR driver Kyle Busch, and Miss U.S.A., Olivia Jordan [ Miss Oklahoma ].

From here, PBR heads to Chesapeake Energy Arena in Oklahoma City on January 22-24.  To learn more about the PBR, you can follow it on Twitter @PBR.