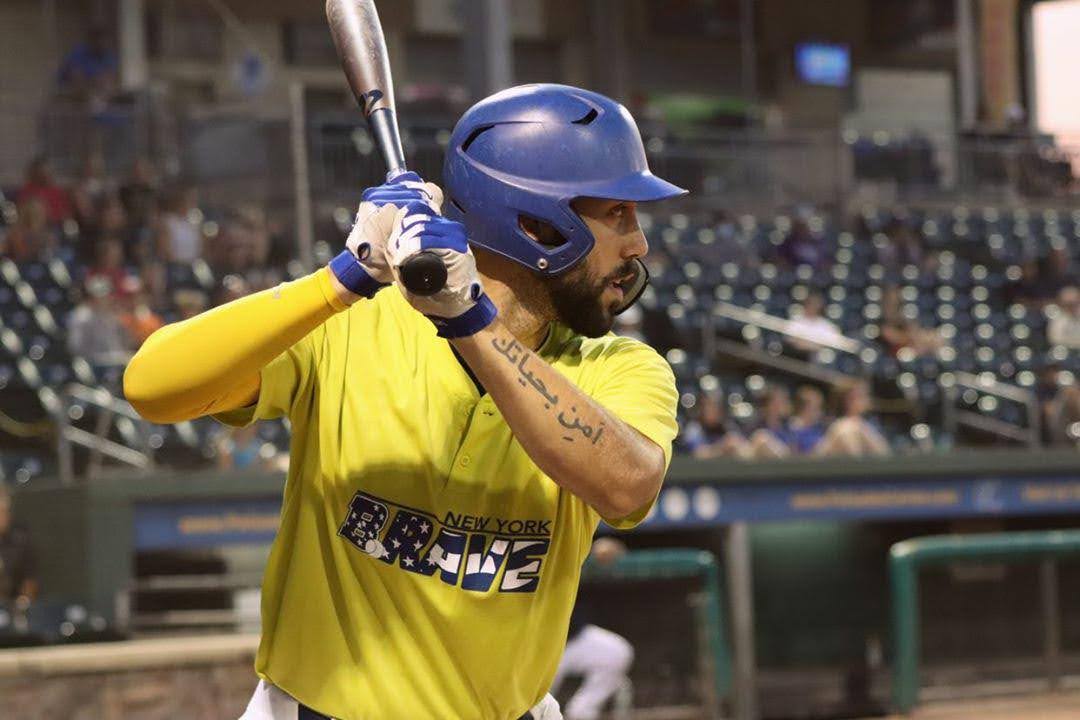 For Peter Peña, a baseball career has come full circle

Born and raised in Sleepy Hollow, New York, Peter Peña grew up with a very loving family. Raised by a single mother, Lara Karacay, Peña’s grandmother lived right down the street. With Peña’s mother working during the day it was his grandma and uncle that took care of him, his sister, Georgina Peña, and his cousin, Itohan Iyalekhue. His uncle, Fadi El-Kari, became his father figure, teaching Peña about life.

“My uncle was basically the only male I had growing up and taught me things on how to be a man and probably had the biggest impact on my life,” Peter Peña said.

That impact stretched far, including in Peña’s early interest in sports.

Peter Peña enjoyed playing a number of sports growing up, whether it was basketball, baseball and football. Beginning in eighth grade, Peña began to play to football, and he excelled in the sport in high school. But then, Peña hit a roadblock when he sustained a concussion during his sophomore year. After further consultation with the head football coach about his future, Peña made the decision to turn his focus towards baseball.

“My coach thought I had a career in college football, but I had to sit down and ask myself  ‘what do I want to do?’… I loved football but felt it was taking up too much time and wanted to solely concentrate on baseball because I wanted to make sure I was going to play beyond high school and college.”

As a three-year catcher on the Sleepy Hollow High School baseball team, Peña flourished and earned several honors including: 2012 All-League and All-Section, and 3rd Team All-State.

“I enjoyed my time immensely,” Peter Peña. “I was with the same group of guys since I was 10 years old. By the time we got to varsity we looked like a bunch of minor leaguers. The association that ranks the New York teams’ in baseball started noticing us and we were ranked eighth at once.”

“I remember being in my junior year where we won our first state playoff game I believe in 30 years and I was just flipping out. Coming from a such a diverse community in suburban Westchester County we were not this big, bustling city but a place that represented any background, nationality and race. That’s what drove us to have such great chemistry and teams’ my junior and senior years.”

Appearing in 40 games 45 games played, Peña hit 2 home runs, 25 RBI’s, and had 38 hits and 18 runs scored. In his sophomore year, Peña upped those numbers with 6 home runs and 30 RBI’s, 34 hits, 23 runs scored and 14 walks that earned him a Maryland Junior College All-Star honors.

However, the injury bug hit Peña again in his sophomore year when a pitch to the face wiped out the season. The effects from the injury were palpable, as Peña lost 50 pounds, unable to digest any solid food and forced to go on a liquid diet.

Recognizing the opportunities to succeed at Cecil Community College were dimming, Peña transferred to Mansfield University where he not only received a full scholarship, but ended up playing with two friends and teammates from Sleepy Hollow in Edwin Lopez and Dionel Infante.

“There were only two colleges that pursued me after Cecil College, and they were the University of Delaware and Mansfield University,” Peter Peña explained. “I thought it would be a foregone conclusion that I would be a Division I kid… The day before I was going to make a decision, I lost the scholarship at Delaware because another kid who the school thought was going to forfeit his scholarship instead decided to attend. I went to Mansfield with another teammate of mine, and I realized going to Delaware would have been a good decision, but I knew the PSAC (Pennsylvania State Athletic Conference).”

In his junior year, Peter Peña caught 21 games, batting .265 with one home run and eight RBI’s. He tallied 13 hits and scored six runs. Just when Peña was turning the corner, injuries struck again as he sustained a torn meniscus in his right knee.

Despite another debilitating injury, a blessing disguise came in the form of Peña meeting his eventual girlfriend, now fiancée and soon to be wife in November, Sarah Pierce.

“I was actually doubting myself if I could play again, because it was a about a five-to-six week recovery. [Then I met Sarah] who was a soccer player at the time. She actually went through more surgeries than I did and to the point where her career was derailed.”

It was then when Peter and Sarah had a heart-to-heart that inspired Peter to be out on the field with his teammates.

“I just said that I’m not just doing to push through this but drive through this. It was more of a mental battle and state telling myself I can do this. Head Coach Harry Hillson ended up being a great mentor and leader as well as Assistant Coach and now Head Coach Andrew Chalot.”

Returning for his senior year, Peña ended up splitting time behind the plate and as a designated hitter. Proving his durability with playing in 46 out of 49 games, Peña led Mansfield in home runs with seven and a team-high 31 RBI’s including hitting two in one game. Defensively, Peña registered 92 putouts and perfect 1.000 fielding percentage.

“It was the best year of my college career because I really put a price on being healthy, having that stamina and focusing what was going in my body,” Peter Peña stated. “Having played only two full years of college just fueled me. I was finally able to put it all together.”

“I did not want to limit myself”

Majoring in business administration, Peña understood the importance of earning a degree. “I’m the son of two immigrants. My dad was an immigrant from the Dominican Republic and my mother is an immigrant from Lebanon,” Peter Peña remarked. “We were not the poorest around the block but we had to move in with my grandmother.”

Peña’s mom always put her family first. She earned her bachelor’s degree and master’s degree from Pace University and eventually earned a job at Sotheby’s in New York.

“She’s my biggest role model and always made time for me and my sister. Now, she landed a new job at Amazon, continuing to move up the corporate ladder.”

“Baseball is my number one passion and what I wanted to do but did not want to limit myself,” said Peter Peña. “It was very important to be taking school seriously especially when people are going to pay for you in terms of a scholarship to attend a university.

Going undrafted did not wipe out Peña’s dreams of playing professional baseball. Mansfield Head Coach Henry Hillson connected Peña with the High Desert Yardbirds in the Pecos League. This allowed Peter to continue playing ball, but this time, on the west coast.

“I only played a short amount of games, maybe 30, but I gained a lot of experience,” said Peter Peña. “[It was] a great introduction to pro ball. I was lucky enough to be introduced to David Peterson through a number of connections, and he became the manager of California City. That’s where I flourished and had my career on both sides of the baseball.”

In his one season for California City, Peña batted .304 with 13 home runs and 38 RBI’s, collecting 38 hits and scoring 27 runs. Putting up those numbers allowed Peña to attend a private free agent workout in Chicago.

“The Pecos League definitely gets a bad rap because I feel a lot of people say bad things in terms of pay and guys having to travel on their own. It’s definitely a grind, but it’s worth it because I feel the talent gets overlooked. There are a lot of guys playing in the All-American Baseball Challenge. Guys who are on the New Jersey Wiseguys and New York Brave.”

But then once again, tragedy struck Peña three days before the workout with the news of his uncle passing away.

“I never made it public, and it was something I never told people before, because he was such an important person in my life and told me he couldn’t wait to watch me on TV,” Peter Peña described. “It was eye-opening and made me realize how precious life can be. I had thoughts about not attending that workout, but my family told me it’s what he would want so I actually ended up going. I didn’t do as well as I wanted to and was hiding a lot of emotions.”

Emerging from those darkest days, Peña returned to the Pecos League, but this time around he joined Garden City where David Peterson became the new manager of the team. And he carries a reminder of his uncle with him through his new tattoo.

Although the league has provided golden opportunities for Peña to continue following his passion, it falls on players to market themselves.

“It’s almost a side hustle in terms of having a job on the side. It really falls upon yourself to get your name out there to higher-level coaches such as the Frontier League, American Association or Atlantic League. It’s almost like a three-headed monster because you have to be your own agent, living up to the billing as a player and worry about your own nutrition and strength coach.”

“In affiliated ball we don’t have that luxury to take a day off. Preparing for a season you have to give it 150 percent and put everything into it. It’s just really a big game of juggling those three aspects and making sure everything goes smoothly as you want to put yourself in the best position to further your career.”

A golden opportunity presented itself in 2020 as Peña signed with the New York Boulders who were getting ready to play for the first time in the Frontier League. However, those plans were scrapped with the regular season canceled due to the COVID-19 pandemic. Despite the setback, the All-American Baseball Challenge was created, allowing Peña to play for the New York Brave at Palisades Credit Union Park.

“The All-American Baseball Challenge is a smaller league but it gives people a chance to play baseball on the professional side this year. The talent has been unbelievable. What we’re doing this season is equivalent to like high Double A and maybe even higher.”

One advantage of the tight-knit All-American Baseball Challenge, is that Peña is able to compete with some of his teammates.

“It’s good that we’re able to get familiar with each other and compete as well against each other.  We’re definitely able to see their talent on the field and a prelude into next year. Both teams’ have a great crop of guys and attitudes. The games between the two teams’ are one of the most competitive.”

Despite the barriers sports face this year due to the pandemic, there’s the silver lining of building a community and finding the blessings in any part of life. This is just another hurdle Peter Peña can overcome.