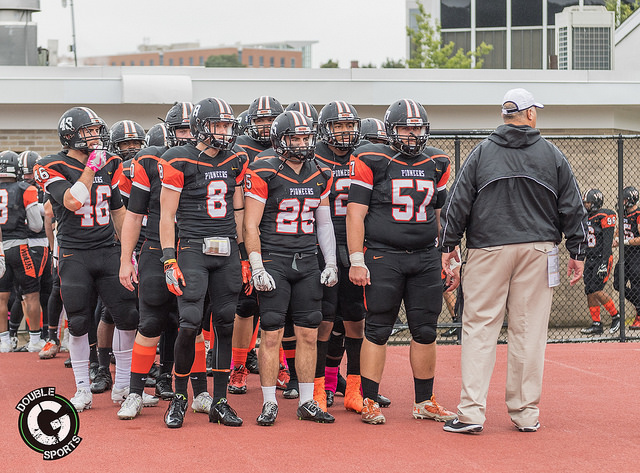 Coming off an emotional win over Montclair State, William Paterson (2-3, 1-3 NJAC) looked to continue to build on that momentum at Frostburg State but the Pioneers found themselves trailing 13-0 after the first quarter. That proved to be too much of a deficit as the Bobcats won 23-0.

William Paterson’s offense was held to 140 total yards of offense in the game.

“We lost the battle upfront and offensively their defensive line controlled the line of scrimmage and that was synopsis of the game,” Head Coach Jerry Flora said. “Turning the ball over by our quarterback inside the 20 is not acceptable way to start the game. Three weeks in a row we have given up the ball on our first possession before the defensive unit gets out there on to the field.”

“Our defense did an outstanding job and gave up 23 points but won the turnover battle and sacked the quarterback,” said Flora. “We got a pick on the goal line before just before the half by Kimbrough. We didn’t get enough pressure on the quarterback as I had liked to but he was a good scrambler and got away from the grips of the defensive line a couple of times. They drove down to the 10-yard line a couple of times but our defense didn’t break and we got a couple of fourth down stops.”

“It’s hard to get down but even harder on the road especially in the confines we were in up in Northwest Maryland where it was cold, rainy and dreary that doesn’t help,” he continued. “23-0 at the half and you can go either way as we made a QB change thinking we would be alright and move the ball and defensively we pitched a shutout in the second half. Frostburg has a good team and right now in the mix in the NJAC. We have some stuff to build upon and have to go back to the drawing board.”

“We ran the ball somewhat efficiently on them last year and it was a dogfight with the final score 62-33,” said Flora. “Being at home will help out and limiting turnovers on offense that I have talked all season long, controlling the clock and third down conversions. Our defense is plus four or five and two or three in the conference in turnover margin. They run the triple option and we will have our work cutout for us.”