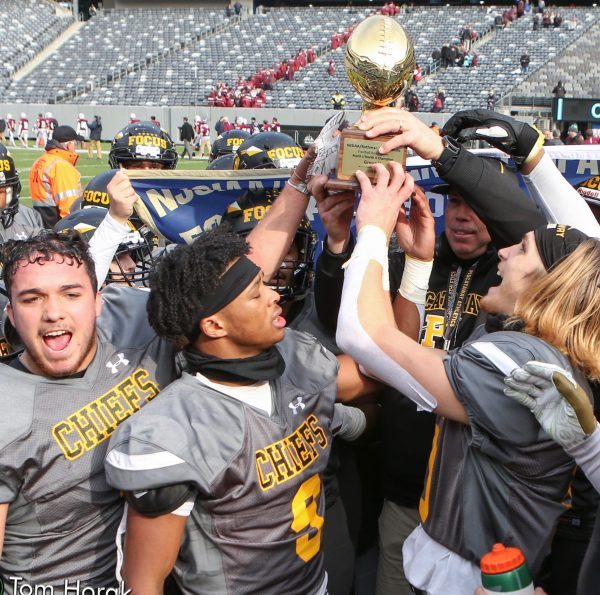 Piscataway clearly had momentum early on in the North Group 5 Bowl Championship Game against Ridgewood (9-3) at Met Life Stadium on Saturday morning. Jumping out to an early 10-0 advantage in the first quarter that was highlighted by Lord Jones taking a direct snap and shaking off tacklers on his way 28 yards to the end zone.

However, the Maroons displayed plenty of spunk on their ensuing drive, marching down the field in eight plays ending in Gabe Santiago blasting through the line for a one-yard score but the extra point was no good with nine minutes remaining in the second quarter. Ridgewood’s defense forced a quick three and out and were further bolstered by a short punt as the offense took possession on the Chiefs 37. Four plays later, Will Cardew exploded through a gaping hole for a 26-yard touchdown run with 4:16 left.

The back and forth action continued, as Piscataway went to its bread and butter, and that was the running game. Juwon Jackson got the ball rolling, ripping off a 30-yard run. Jackson had help from his fellow running backs Nasir Best and Daniel Lopez. On second and one from the Ridgewood 11, Best plowed through a maze of tacklers but ending up fumbling the ball. Luckily, offensive lineman Jordin Marttell was in the right place to scoop up the ball and rumble into the end zone with 1:13 on the clock.

“There was no way Ridgewood was not going to fight today,” said Piscataway head coach Dan Higgins. “Our team knew that and Coach Johnson does a great job with that program. We went out to scrimmage against them because we have great respect for the program and he made us better back them and today.”

Receiving the opening kickoff in the second half, the Chiefs embarked on a 16-play, 80-yard drive that consumed 8:27 of the clock resulting in Best smashing through the line for a five-yard touchdown.

“That was the difference in the game and take that drive and control the game because they got some momentum and best thing when you can control the ball, possess the ball and wore them down on that drive,” Higgins said

Not finished finding the end zone on this day, Best capped off 104 yard running day on 24 carries, scoring his second touchdown of the game with nine minutes left in the fourth quarter extending the advantage to 31-13.

“We’re in Met Life Stadium, I just made the most out of my opportunities, having fun, balling out today, enjoying the win and a long journey,” said Best.  “The offensive line has been working hard all year, nothing new but this is a big stage and they did their thing today.”

Once again Ridgewood refused to go away quietly, swiftly moving the ball down the field in eight plays on their ensuing possession as quarterback Liam Tarelton connected on a 26-yard touchdown pass on fourth down to Will McDermott down the left sidelines. Going for the two-point conversion, Tarelton fired a successful pass to tight end James Miller making it 31-21 with 5:31 to go.

Piscataway managed to stem the tide, relying on a host of running backs to run out the clock and capping off an undefeated season at 13-0. The Chiefs only punted once in the game and finished lugging the ball 51 times for 331 yards, with Jackson leading the way with 14 carries for 122 yards.

“We made history, first 13-0 team from Piscataway,” said Best.