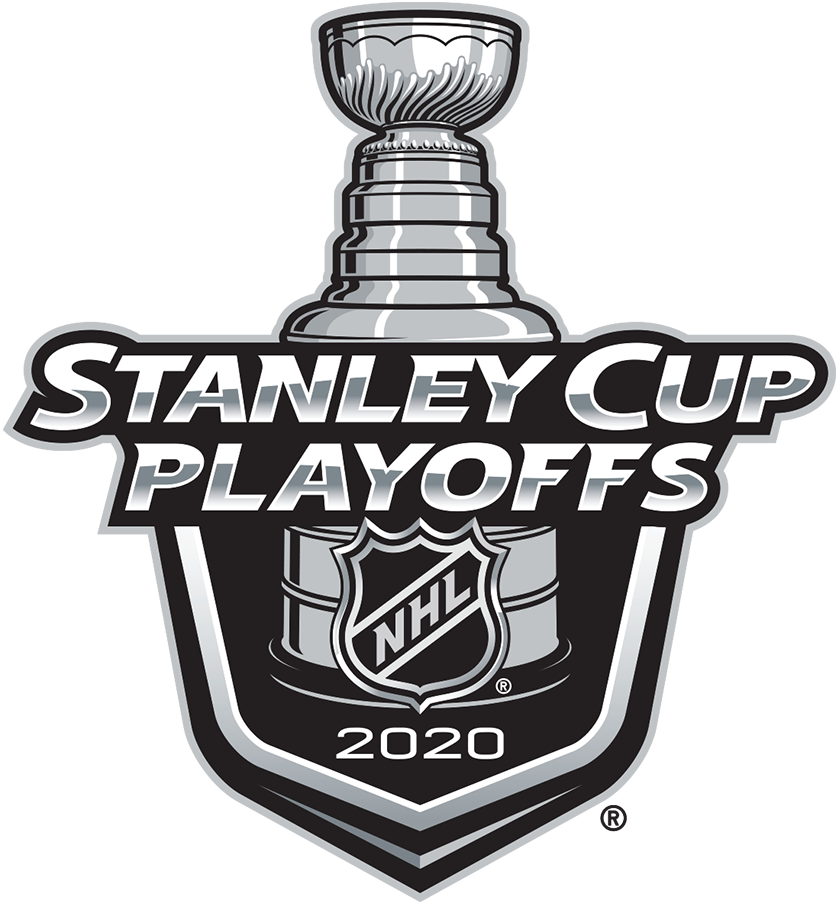 The NHL season is currently on hold and it is unlikely that the final regular-season games will be played. The playoffs are still an option as of now but how the league chooses to handle the seedings in a potential playoff is a constant debate. The most common choices for the normal 16-team format are to use total points or points percentage. Each option presents a different scenario and Will Wiegelman takes a look at how this could affect the Eastern Conference while Anthony Paradiso breaks down the West. 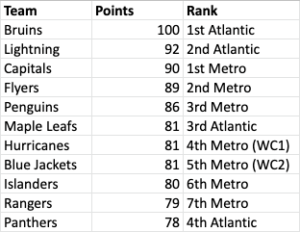 Using total points, the Eastern Conference features five Metropolitan Division teams and three Atlantic Division teams in the playoffs. The Bruins are the top seed with the Capitals as the other division leader. The Lightning and Maple Leafs are second and third, respectively, in the Atlantic while the Flyers and Penguins hold those spots in the Metro. The Hurricanes and Blue Jackets are the wild-card teams. Using this method, Boston would face Columbus in the first round. These two teams met in the second round last season after the Jackets’ upset of Tampa Bay. Boston won that series in six games. Tampa would match up with Toronto in a series featuring two teams who’s recent legacy heavily involves losing in the first round of the playoffs. One of them would be able to end the heartbreak. Washington would get a rematch with Carolina. The Canes ended the Caps’ title defense last year in overtime of game 7 in the first round. Finally, the Battle of Pennsylvania would appear in the playoffs for the first time since 2018. Philadelphia would look for revenge after the franchise’s last playoff game was an 8-5 game 6 loss to Pittsburgh that year. 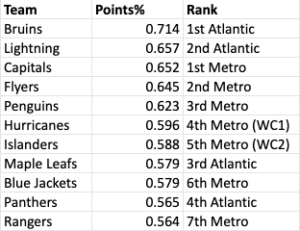 The only difference if the points percentage system is used would be the Islanders replacing Columbus in the second wild-card spot. New York is one point back of the Jackets’ with two fewer games played and owns a .009% advantage in points percentage. The Islanders would face Boston for the first time since their last Cup run back in 1983. Not much is different in the Eastern conference between the total points and points percentage methods. The West, however, is a lot more wild. 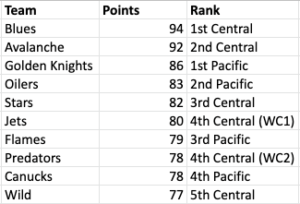 Using total points, the Blues are the top-seed in the Central Division, while the Golden Knights are top-seed in the Pacific Division. The Oilers and Flames would be second and third seeds in the Pacific, while the Avalanche and Stars hold those spots in the Central. When the season was paused, the Predators were tied with the Canucks with 78 total-points. However, in this scenario, the Predators would make the playoffs as the second wild-card team instead of Vancouver, because they hold the tie-breaker for regulation wins over the Canucks. The Jets make the playoffs in the first Wild-Card spot. The Predators draw the defending Cup champion St. Louis Blues in the first round, but do not be deceived by the gap between these teams in the standings. Nashville won all four games they played against the Blues this season albeit three were by one-goal. A match-up between the Golden Knights and Jets features two great offenses and talented goaltending. The Oilers and Flames meet in the first round for the first time since 1990-91. In Connor McDavid and Leon Draisaitl, Edmonton has the two highest-scoring forwards in the NHL this year, not to mention the Oilers had the best power-play and the second-best penalty-kill in the NHL this season. On the other hand, the Flames can match the Oilers’ skill with Johnny Gaudreau and Matthew Tkachuk. Each time these two met during the regular season, tensions boiled over, including when Flames goaltender Cam Talbot fought Oilers goaltender Mike Smith during a line-brawl in a game on Feb. 1 of this season. In the Central Division, the Colorado Avalanche face the Dallas Stars in the first round. The Avalanche will likely be without their starting goalie, Philipp Grubauer. However, Colorado’s back-up goaltender, Pavel Francouz, has a 21-7 record in 34 games this season. The Stars’ starting goaltender is Ben Bishop, who is 21-16 with a .920 save percentage this season. Nathan MacKinnon has scored almost forty points more than any Dallas player during the regular season, but in their playoff careers, Stars’ captain Jamie Benn is almost a point-per-game-player, while MacKinnon has scored more than a point-per-game. 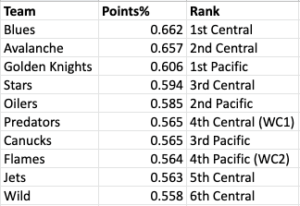 The most dramatic change in the points-percentage method occurs in the Pacific. Because of their slightly higher percentage, the Vancouver Canucks move ahead of the Calgary Flames into third-place in the Pacific and the Flames move down into the second wild-card spot, where they will play the defending Cup champion Blues. The Canucks will play the Oilers in the first round. The Canucks split their season-series with the Oilers. Meanwhile, the Predators play the Vegas Golden Knights. The Knights and Predators played evenly during the regular season, but the Knights ended up winning two out of the three games. The Winnipeg Jets will miss the playoffs by one-thousandth of a percentage point if the NHL decided to rank playoff teams based on point-percentages.

The total-points method puts teams into the playoffs who have earned the most points. The points-percentage method rewards teams for winning a greater percentage of their games. If the NHL resumes play later in the spring, the NHL will have to decide whether point-percentages or total points is better at defining a team that deserves to advance to the playoffs.