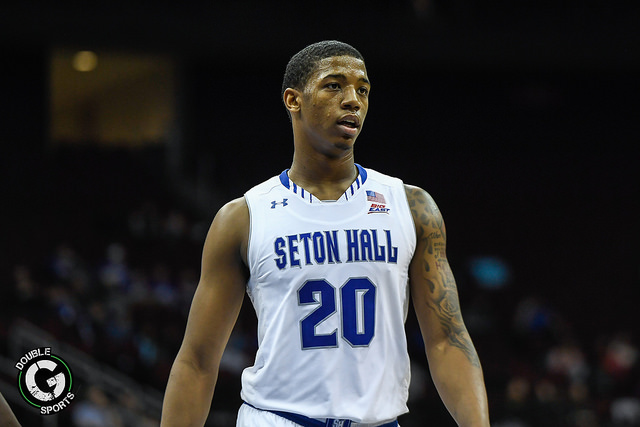 After making their second consecutive NCAA Tournament, Seton Hall was hoping to make a bigger splash than they made last year. Gonzaga quickly dispatched of The Hall in last year’s tournament and this season, the Pirates were hoping to make it to the second round of March Madness for the first time since 2004.

After leading by eight points in the second half, Seton Hall was unable to hold on to their advantage and lost to Arkansas 77-71 in their NCAA Tournament First Round game in Greenville, SC.

Midway through the first half both teams were having issues shooting, specifically shot selection. Arkansas and Seton Hall were taking deep shots and not making the extra pass to find a better shot for their teams. Arkansas’ Moses Kingsley put on a show in the first 20 minutes of the game scoring 15 points in the first half as Seton Hall could not stop him inside and on the perimeter. The defense for the Pirates ratched up forcing four consecutive Arkansas turnovers in a span of three minutes that led to a 12-4 Pirates’ run and a 29-27 lead.

Late in the first half, Arkansas began to speed up the tempo of the game which led to turnovers for both Arkansas and Seton Hall. The sloppy basketball resulted in lost possessions offensively for the Pirates and only until Seton Hall slowed the game down, were they able to finally make baskets and draw fouls as the game was tied at 37 at halftime. Seton Hall held a 24-17 rebounding edge, which is their average rebounding margin for the season.

The second half was a half of runs as Arkansas went on a 9-2 run to take an early second half lead. During the run, Seton Hall committed three turnovers which led to easy Arkansas points. The Pirates went on a run of their own as The Hall went on a 18-5 run which gave Seton Hall a 64-56 lead with 8:30 left in the game.

Arkansas turned up the volume on their pressure defense and held Seton Hall to just three points in the final 6:47 of the game as Jaylen Barford hit a driving layup to tie the game at 68 with 5:09 remaining. The final minutes featured both teams playing tight defense but in the end, Arkansas’ defense was too much for Seton Hall. A costly turnover by Khadeen Carrington, Seton Hall’s 15th turnover of the game, took the wind out of Seton Hall’s sails and started final spiral for The Hall.

With 18.3 remaining in regulation and Seton Hall down by one, Desi Rodriguez was called for a Flagrant 1 Foul after fouling Barford. The referees determined that Rodriguez was not going for the ball and charged him with the costly foul. That called turned out to the demise of the Pirates as Barford hit both free throws and Arkansas retained possession.

“I didn’t realize how hard I pushed him but I thought it was a basketball play,” Rodriguez said after the game. “It wasn’t intentional.”

“I thought there was no play on the ball,” said Arkansas coach Mike Anderson. “He pushed the guy.”

Carrington led Seton Hall with 22 points while Angel Delgado finished with 13 points and 12 rebounds. Three point shooting was an issue once again as the Pirates shot just 6-of-17 from behind the arc while dominating the rebounding battle over Arkansas by 14 (46-32). In the end Seton Hall shooting only 38 percent from the field and the long cold stretch in the final minutes offset the rebounding victory.

Arkansas was led by Moses Kingsley who finished with 23 points and Barford scored 12 of his 20 points in the second half as the Razorbacks shot 47 percent from the field, four percent higher than Seton Hall normally allows. Arkansas will face North Carolina in the second round of the NCAA Tournament on Sunday.