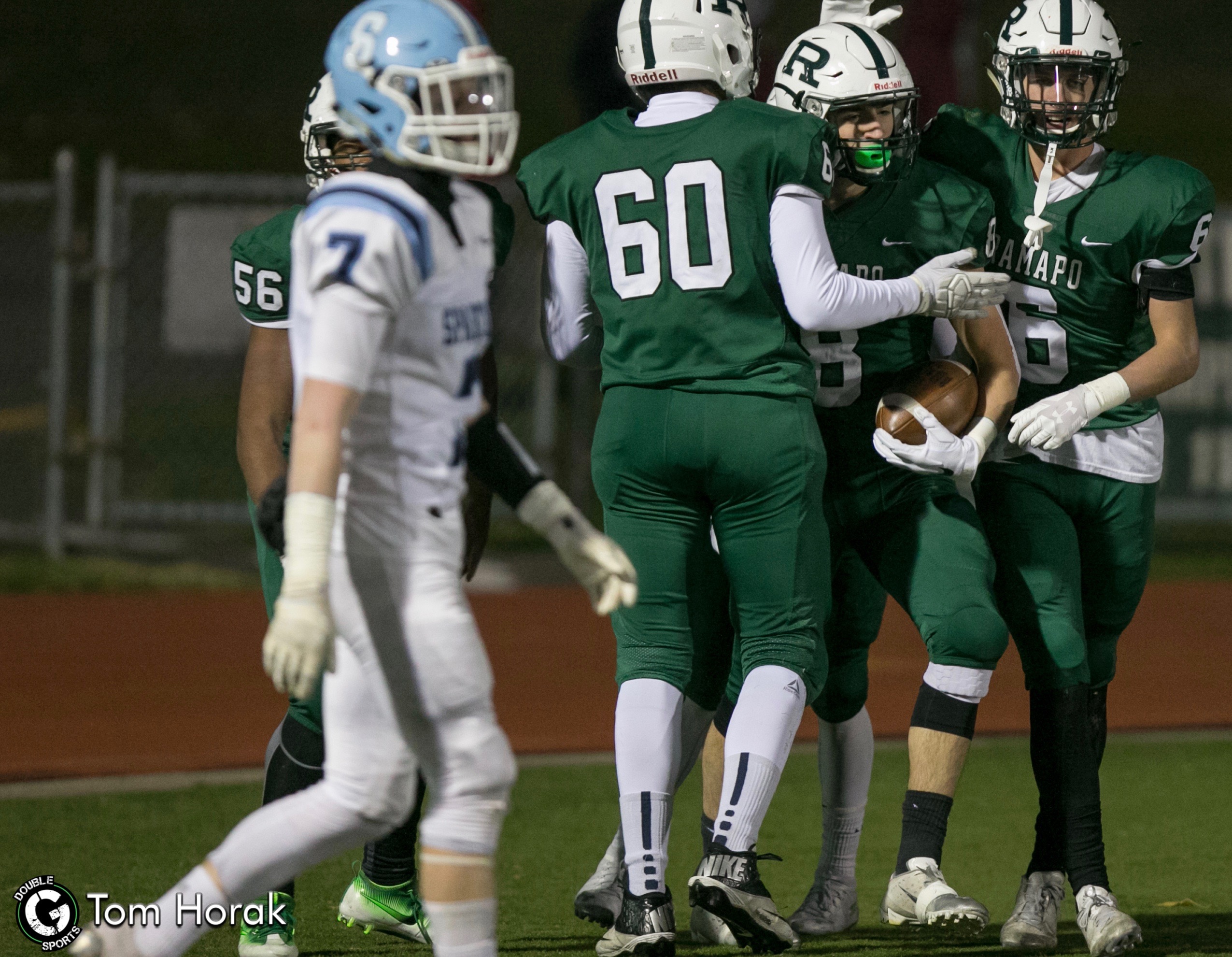 Appearing to be in command up 14-0 against the Sparta Spartans (8-3) in the second quarter of the North 1, Group 3 Sectional Semifinals at Ramapo High School on a frigid late Saturday afternoon, the number one seed Ramapo Green Raiders (11-0) quickly discovered Sparta would not go away easily responding on the ensuing drive with a one-yard touchdown run by running back Austin Castorina but the extra point failed.

Backed up at their own one-yard line after a 39-yard punt by Ramapo wide receiver Isaiah Savitt with less than six minutes remaining, Castorina continued his monstrous first half ripping off a 49 yard run. Facing a fourth and one at the Green Raiders 21, Castorina smashed through the line for a one-yard gain.

Not deterred at all Castorina chalked up a 21-yard run advancing the ball down to the one. Denied the first three plays at crossing the goal line, Castorina finished off a 150 yard performance on the ground in the first half plowing ahead for the score with 1:38 to go and caught a two-point conversion pass from quarterback Kenny Oelkers tying up the contest.

Needing to swing the momentum back in their favor in the third quarter, Ramapo accomplished that goal in receiving the opening kickoff. Not once throwing the ball in air, the Green Raiders lugging the ball eight times on the ground culminating in quarterback AJ Wingfield scoring from eight yards out with 9:22 left.

“We took a good shot from Sparta,” said Wingfield. “We had a good game plan and in the second half made some adjustments and just tried to run the ball and our offensive line stepped up big time. We had to run the ball down their faces.”

However, Sparta would not be phased answering back on their ensuing offensive possession pulling even as Oelkers connected on a 41-yard touchdown pass to wide receiver Tyler Szabo tying the game up once again. A game chock full of twists and turns continued with the Green Raiders continued to pound the rock on the ensuing drive, this time relying on running back Luke Ragone.

Rushing for 53 yards in the first half, Ragone showcased his abilities in the third quarter gaining 28 of 59 yards in the quarter and completing the drive by barreling through the offensive for an eight-yard touchdown putting Ramapo back on top 28-21 with three and half minutes to go.

“The offensive line was fantastic, blocking all day and ran behind them when I could,” said Ragone. “We knew we had to run the ball in the second half, came out running and kept doing it. A lot of toughness in this game, if you weren’t tough you were not coming out on top.”

The Spartans roared back thanks to an unsportsmanlike penalty on the Ramapo defense and Oelkers completing a 23-yard pass to Szabo advancing the ball down to the Green Raiders 25. However, on a fourth and ten play Isaiah Savitt batted down a pass from Oelkers in the end zone. Ramapo’s defense stacked the box holding Castorina to 18 yards on 10 carries in the second half.

That set the table for Wingfield, carrying the ball eight times for 88 yards and two touchdowns, Wingfield (12 of 16, 152 yards) used his arm this time airing out a 33 yard pass to Max Baker moving the ball into Sparta territory. After 10 yards on a quarterback keeper, Wingfield hooked up with Savitt on a 27-yard touchdown pass down the middle of the seam with 10:34 left in the fourth quarter.

The Green Raiders defense answered the bell as the Spartans swiftly moved the ball downfield on a huge fake punt run by Pat Milliken. Sacking Oelkers for a 14-yard loss and on a fourth and 18 at the Ramapo 37, stopping Oelkers short of the first down marker.

Just when you think the game was in hand, Sparta forced Ramapo in a quick three and out, Oelkers (12 of 24,193 yards) did not fail this time around connecting with Szabo for a second time on a 31-yard touchdown but for a second time the extra point was no good.

Sensing the game was getting too close for comfort with less than five minutes left on the clock, Ragone cemented his spectacular night running the ball eight consecutive times while salting the 42-27 victory with a four-yard touchdown run with 1:15 remaining. Ragone carried the ball 29 times for 177 yards.

“I was really proud of our team in the second half, we were in a battle and we did what it takes to win a football game,” said Ramapo Head Coach Drew Gibbs. “We managed to overcome adversity and get to play for a title. This Group 3 bracket the best in the state and top four teams that play as hard as anyone in the state.”

“We have great kids that buy on one hundred percent, play for each other and couldn’t be more proud of them. Our offensive line had a great game and done it all year for us and more importantly we were in a battle at halftime and had great resolve and took care of business. Luke is a very physical runner, got great speed and because we’re such a balanced offense we have not had to lean on him all year like some backs. He may not have the numbers but in big games such as Wayne Hills and Sparta he stepped up.”

“AJ has been an outstanding quarterback for us, he provides a dual-threat in running and throwing it and makes us very tough to prepare for because you can’t take away one phase from him.”

With the victory, Ramapo hosts third seeded and rival River Dell (8-2) next Friday at Ramapo High School with kickoff set for 6:30 p.m. Last year the Golden Hawks defeated the Green Raiders 28-7 in the sectional final at Met Life Stadium and have won back-to-back state championship titles.

“Ramapo-River Dell has become a tremendous rivalry game over the last five years, going back and forth,” Gibbs said. “We have had great games, they have come on top in the playoffs a few more times and we have had their number in the regular season. A great opportunity for our guys, we set the goal at winning a bowl game at the beginning of the season and next step in the process.”

Wingfield on the match-up against River Dell, “We’re going to bring it, River Dell is a really good team and always are, great coach and players over there. I feel we have an edge because of our coaches and do a great job of planning each week, great scouting reports and doing a good job of getting our guys the ball.”